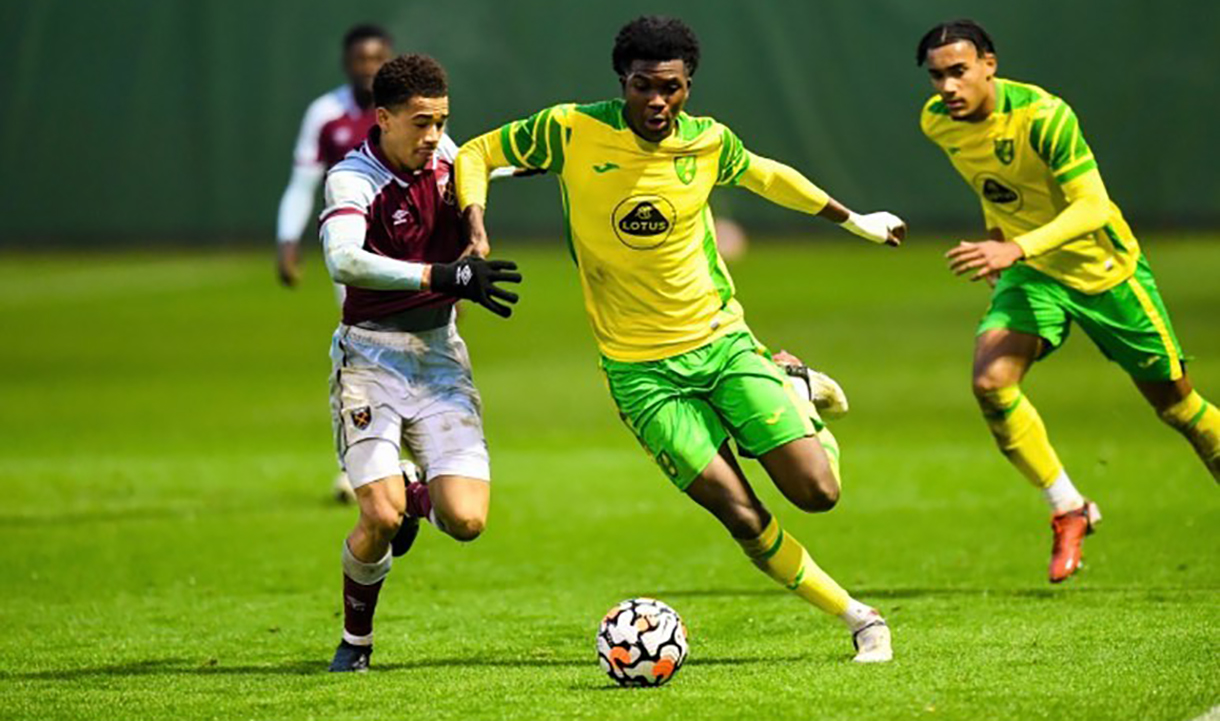 West Ham United U18s bounced back from their FA Youth Cup disappointment to finish 2021 on a high with a commanding 2-0 victory away at Norwich City U18s on Friday afternoon.

In the Hammers’ final game before the Academy winter break, George Earthy and Divin Mubama both struck before half-time to give the visitors a crucial three points against bottom-of-the-table Norwich at Lotus Training Centre.

It was the hosts who made the brighter start, seeing plenty of the ball and creating several clear opportunities, but finding themselves unable to capitalise.

And having taken a two-goal lead into half-time, West Ham grew into the contest and managed the game superbly to secure not just the win, but a clean sheet as well.

Kevin Keen made five changes to the side which lost 3-2 to Newcastle United last time out, with Mason Terry, Asher Falase, Oliver Scarles and Lewis Orford all recalled, whilst a midfielder Trialist was also given an opportunity to impress from the start.

The opening 15 minutes were dominated by the hosts, with the first chance of the match falling for Norwich’s Alex Matos after Dubem Eze won the ball back inside the West Ham box. Matos was able to hit the target, but it was a tame effort and was comfortably saved by Terry.

Matos was influential just moments later, driving down the right wing before sliding the ball to Kenneth Aboh, who released his shot. However, there was a lack of conviction again and Terry was left untroubled.

Aboh had his best chance of the half as the ball broke for him on the right side of the West Ham 18-yard box. The Norwich striker was able to swivel and shoot, but the ball went just wide of the post after a deflection.

Keen’s side had survived a testing opening 20 minutes and began to grow into the game, seeing more of the ball as the half went on.

Orford had the Hammers’ first big opportunity in the 22nd minute as the young midfielder advanced from midfield and struck the ball towards the Norwich goal. Reece Trueman was in net for the Canaries, and he was only able to parry the ball, causing panic in the Norwich defence – but the ball was eventually put behind for a corner.

Having first tried the in-swinger, West Ham won another corner, and this time Ollie Scarles stepped up and delivered a superb left-footed cross. The ball was whipped in with such venom and precision that it might have been heading in anyhow, but George Earthy made sure, getting his head to the ball to give the Hammers a 1-0 lead.

Despite Keen’s side taking greater control of the game, the next big chance fell to the hosts – and it was their best opportunity of the match.

Just after the 30-minute mark, Osman Foyo played a fantastic ball over the top of the West Ham backline, releasing Aboh down the left flank. The No9 was able to sprint to the touchline, before driving a low cross towards Kenny Coker who could not direct the ball on target at full stretch.

A half which began with Norwich dominance concluded with West Ham pressure as the visitors pushed for their second.

Regan Clayton found space down the left-hand side in the 40th minute and cut the ball back to Mubama, who took a touch and fired from just outside the six-yard box. The in-form West Ham striker took slightly too long, however, allowing a Norwich defender to make a superb, goal-saving block.

Just four minutes later, Mubama found himself in a similar position, and this time he made no such mistake. Orford’s deep cross fell to the Trialist, who was able to control the ball at the back post and find Mubama. The West Ham striker showed superb composure, rounding the defender and striking the ball into the bottom-left corner.

This was almost the last action of the first half and the second goal looked like it had knocked the wind out of Norwich’s sails. The Hammers controlled the second half and were defensively comfortable with all three central defenders - Falase, Scarles and Sean Tarima – neutralising the Norwich attack brilliantly.

The Canaries’ only real chance in the second period came in the 50th minute, but Aboh was unable to get the better of Falase who showed the striker outside, narrowing his angle at goal, and, as a result, forced him to shoot into the side netting.

There were very few chances in the remainder of the second half, with several subs and fouls breaking up play as West Ham managed the game superbly. The Hammers finished the game on the front foot with half chances falling to Junior Robinson and Earthy, but they were unable to add a third goal.

The Hammers will be delighted to end 2021 with three points – which see them remain seventh in U18 Premier League South, but with at least a game in hand on all of the sides above them – and a clean sheet, particularly after the disappointment of their FA Youth Cup exit.

“We didn’t really get a kick, but we stuck with it and stayed in the game, which we’ve been working a lot on when we’re not playing well – not conceding”.

“We showed some really gritty determination and got ourselves in front through a set play. It was a good ball from Ollie and George managed to get a touch on it.

“We defended well again for another chance, Mason made a couple of big saves and then Divin gets the goal just before half time with his right foot, which was really important.

“In the second half, we weren’t great on the ball, but it was a real steely performance in a game that felt more like a reserves game than an academy game, where we showed grit, guts and determination after a disappointing result in the Youth Cup last week.

“I thought the boys bounced back well and have finished the year on a high note.”