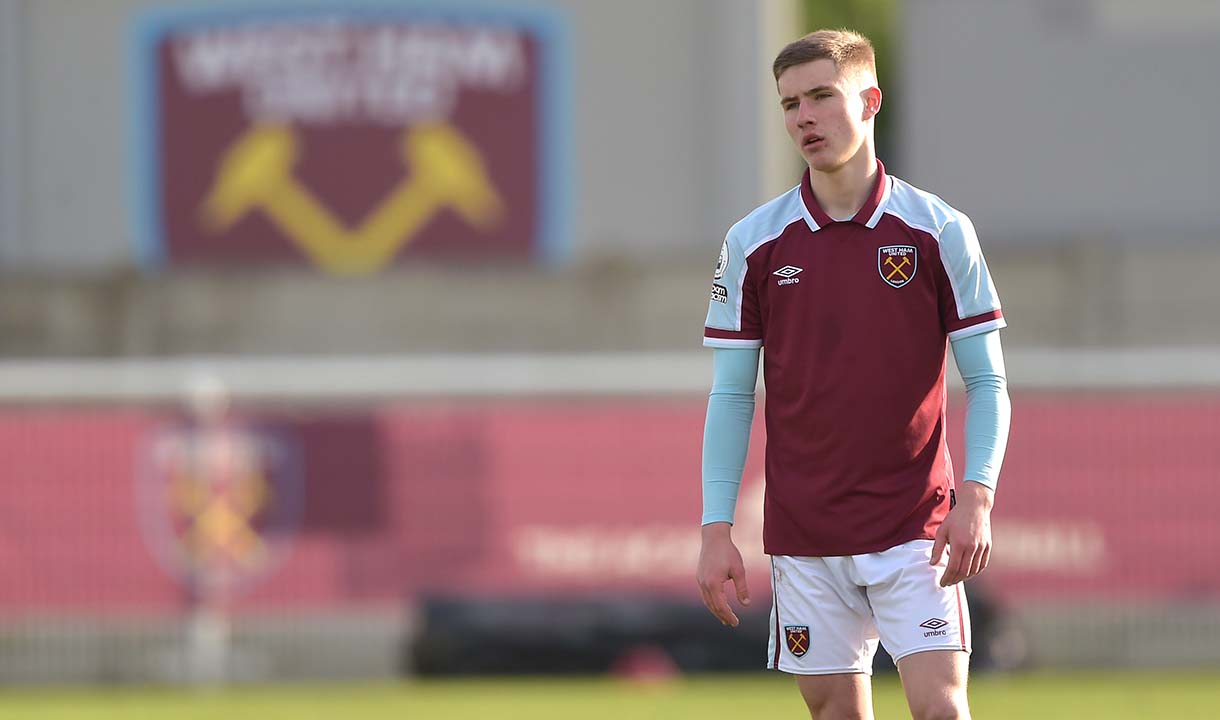 West Ham United U18s put in an industrious and resolute showing to earn another clean-sheet in a 0-0 draw away to Aston Villa.

Contested in harsh weather and tough conditions, the U18s endured a literal storm and once again displayed their immense defensive credentials in a tricky match at the Bodymoor Heath Training Ground.

The young Irons headed into Saturday’s lunchtime kick-off on the back of six consecutive wins in Premier League U18s football, but the strong winds and sleet meant both the travelling side and their hosts were in for a challenging fixture.

It was the Hammers who went closest in the opening exchanges through forward Divin Mubama. The 17-year-old latched onto a loose ball in the penalty area, which ricocheted through the Aston Villa defenders, and launched a volley just narrowly over the cross-bar.

Full-back Regan Clayton – who put in a good showing for the U23s a week ago – also went close to opening the scoring. Good work by Mubama on the left-flank led to the ball being laid off to Clayton. His shot seemed destined for the net, only for Villa to clear the effort off the line at the last possible moment.

Eager to keep their winning run going, West Ham stepped into another gear in the second period as Clayton and fellow full-back Junior Robinson offered an increased attacking outlet on the respective flanks.

Both fired multiple balls across the face of the Villa goal, only for Hammers attackers to agonisingly fail to connect.

Mubama would then strike the bar with another effort, but could not find the target on an afternoon where the final ball just did not seem to fall West Ham’s way.

Despite not being able to grab a winner, one that the performance arguably merited, the Irons were able to keep yet another clean-sheet and earn a deserved point on the road.

U18s assistant coach Gerard Prenderville said: “It was a tough game for our U18s against Aston Villa. Villa are a very good side so we knew we were in for a tricky game. It was a really good game of football, to be fair, in difficult conditions.

“We were well organised and defended well in the first half. In the second half, I thought we came out and we did a lot better. I think we controlled the game in the second half, but we just couldn’t quite get the final touch on it.

“It was one of those games where we just couldn’t quite get the ball over the line. It wasn’t through our endeavours or our character. It was just one of those days for us.

“I thought Villa were tough opposition. They moved the ball quickly and looked a threat on the counter attack. For the boys to go away to Aston Villa, keep a clean-sheet and get the point, it’s great for them. If you can’t win, then it’s good to not lose, and that’s vital for their development.”

Prenderville noted that the players were disappointed not to come away with the victory from their trip to Villa, pointing out that such results will benefit the squad in the long-run.

He continued: “We’ve gone so long on this run of winning, or not being beaten, but results that don’t go your way are part of the development process.

“Kevin [Keen, U18s lead coach] told the boys after the game that it was a good performance, even though they didn’t win. Part of the learning curve is to go to these places, on the road, and solve those problems.”

The stalemate at Villa was the U18’s ninth clean-sheet in all competitions this campaign, and Prenderville is delighted with the team’s defensive efforts throughout the season so far.

He added: “A clean-sheet away to Aston Villa isn’t a bad thing at all. There aren’t many clean-sheets in U18s football so that’s a real positive thing for us.

“We’ve now got nine this season and that’s a real testament to the goalkeepers, the defenders, and everyone in the entire team. The entire side, no matter who is playing, takes real pride in a clean-sheet. Whether that comes through pressing from the front or defending set-plays really well, or even through last-ditch challenges.

“As I say, there’s not really that many clean-sheets at this level so for us to have that many at this point is incredible for the boys.

“There are ten games now left in the season and we want to, collectively, really push to finish the campaign as strongly as possible.”