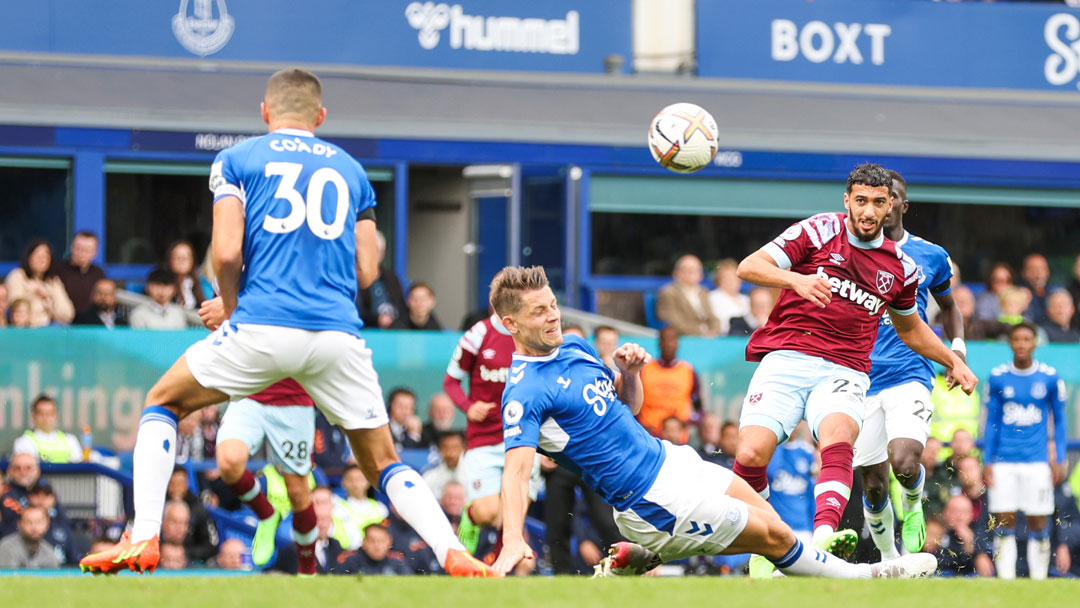 West Ham United fell to a 1-0 Premier League defeat against Everton at Goodison Park on Sunday.

The Toffees struck shortly after the break when Neal Maupay netted his first goal for Everton from the edge of the area.

Saïd Benrahma was then inches away from an equaliser when he hit a whipped effort that flew past Asmir Begović but came back off the inside of the post.

Maxwel Cornet was denied by the Everton 'keeper and Declan Rice then saw his header cleared off the line, but the Hammers could not find a goal to bring a share of the spoils on Merseyside.

The first half unfolded slowly, although a few half-chances were fashioned as David Moyes’ men broke.

A quick throw from Vladimír Coufal sent Jarrod Bowen charging down the right. The England forward then cut back inside, but his low cross was scrambled behind by Conor Coady.

Perhaps West Ham’s best period of attacking pressure came midway through the first 45 minutes when a trio of corners brought a few efforts at goal. A Lucas Paquetá header deflected wide, Aaron Cresswell saw his effort from the edge of the area deflect past the post, then Paquetá sent another header at Begović, although the Everton stopper, starting in place of injured Jordan Pickford, was across to deter the danger.

Antonio later saw his shot well blocked by James Tarkowski after the Hammers No9 had got past Coady. Late in the half, a deep cross from Aaron Cresswell found Kurt Zouma, but the French defender only saw his header drift into the hands of Begović.

Pablo Fornals and Rice combined nicely down the left as the second half began, but Bowen, who found himself free on the edge of the area, sent his left-foot half-volley over the bar from 16 yards.

And it was Everton, who produced just two shots on target throughout, who scored the only goal of the game with one of them.

The winner arrived on 53 minutes when Maupay netted his first goal for the Toffees. The Frenchman collected from Alex Iwobi, spun on the edge of the area and finished well into the near bottom corner beyond Łukasz Fabiański's dive.

The Hammers almost responded immediately, as Antonio saw his header saved by Begović and Bowen also had two shots blocked from inside the area.

Moyes made a double substitution on the hour, with Benrahma and Cornet brought on as the Hammers pushed for an equaliser. Tomáš Souček saw his header fade the wrong side of the post, before Gianluca Scamacca was introduced to further the charge at the Everton goal.

Benrahma might have pulled the Hammers level, but his mazy run infield ended with his left-footer from 25 yards clip a defender and hit the woodwork before spinning behind Begović.

That frustration continued for the Hammers. Cornet was later denied by stand-in goalkeeper Begović with less than ten minutes left on the clock, and also went close again when Scamacca played him in behind the Everton defence with a neat, flicked header, only for Nathan Patterson to make a vital intervention.

Begović then tipped Bowen’s cross over the bar, and Rice saw his header cleared off the goalline in stoppage time, as West Ham ended the afternoon frustrated and in the Premier League's bottom three for the September international break.