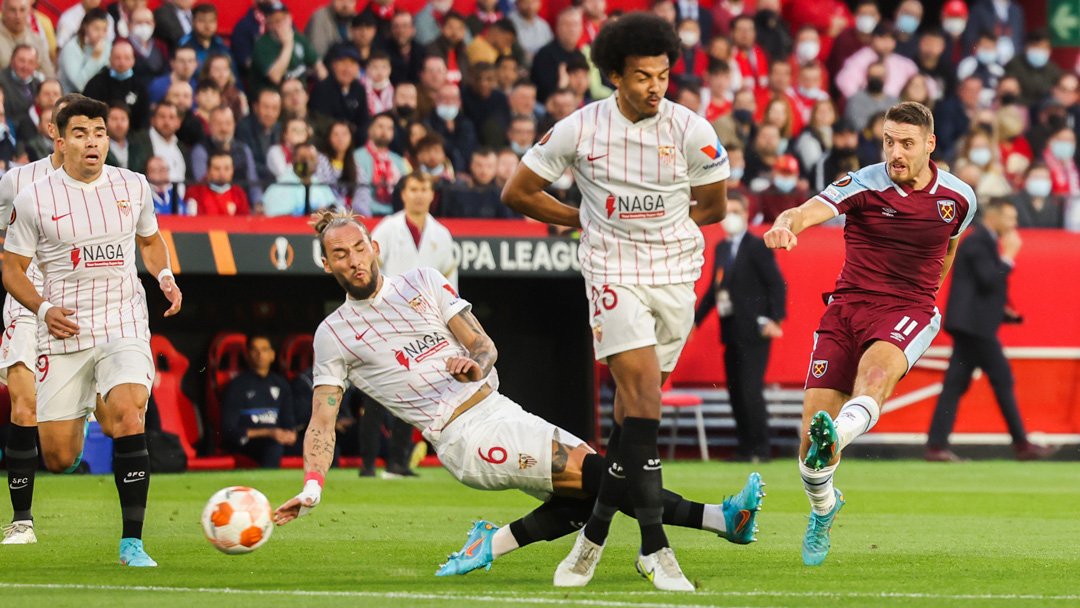 West Ham down but not out after Sevilla defeat

West Ham United’s European dream remains alive after David Moyes’ Hammers were narrowly edged out 1-0 by Sevilla in the UEFA Europa League round of 16 first leg.

The Hammers gave their all in southern Spain, and could even have come back to east London with a more positive result, after a game in which they held their own against the record six-times Europa League winners for an hour.

However, the La Liga side undoubtedly possess quality of their own, and it is they who will bring a slender advantage to London Stadium after Munir slammed in the only goal with a powerful low first-time strike from Marcos Acuña's cleverly crafted free-kick.

As happened at Liverpool in their previous match, David Moyes' side again created opportunities to score goals, and the manager will hope his players can find their shooting boots next Thursday night and take us through to our first proper European quarter-final in 41 years.

The Andalusian city was a sea of Claret and Blue ahead of kick-off as thousands of West Ham supporters congregated in the warm sunshine to enjoy a drink and a sing-song before joining forces for the late afternoon walk to the historic Ramón Sánchez-Pizjuán Stadium.

There, they were joined by their equally vocal counterparts in Sevilla red, making for a fantastic atmosphere as kick-off approached.

When the game did get underway, it lived up to its billing from the start, with both teams going on the front foot, making for an entertaining and enthralling clash of styles – Sevilla playing possession-based football and raining crosses into the penalty area, West Ham looking to break at pace and catch their hosts out on the counter.

There were ten goal attempts in the first 20 minutes, with Sevilla having seven, but West Ham undoubtedly having the clearest.

Youssef En-Nesyri headed straight at Alphonse Areola and saw a shot blocked by Ben Johnson while Munir and Acuña sent efforts wide of the target as the Spanish side came quickly out of the blocks.

Then, on eleven minutes, the Hammers arguably should have taken the lead. Joan Jordán was penalised for handball 35 yards from his own goal, Manuel Lanzini curled over the free-kick, Declan Rice headed square, but a diving Nikola Vlašić could only power his header too close to goalkeeper Bono, who parried to safety.

Having survived an almighty scare, Sevilla resumed their creation of a succession of half-chances, with Jordán seeing a shot blocked, Jesús Corona volleying high and wide and Jules Koundé sending a bouncing effort straight at compatriot Areola from 30 yards.

As the midway point of the first half came and went, neither the noise levels nor the goalmouth action dropped, with Munir and Vlašić trading low shots which narrowly evaded the bottom corner.

Then, as the interval approached, Fornals saw a volley blocked behind and a competitive opening half somehow ended goalless.

Although the second half produced less chances, it did produce a goal, but unfortunately one for Sevilla rather than West Ham.

Souček had stung Bono's palms from distance early in the period, but the home side then began a period of dominance that culminated in Munir giving them a 60th-minute lead.

The Moroccan fired a shot over and fellow countryman En-Nesyri saw a header saved before the former Barcelona forward struck, sending a well-hit half-volley past Areola from Acuña's cleverly crafted free-kick.

Moyes responded by sending on Saïd Benrahma for Vlašić and the Algerian did make an impact, leading to Fornals seeing a shot blocked and Lanzini sending another wide of the target.

Sevilla continued to carry a threat too, with Argentina international Lucas Ocampos twice firing a yard wide in the closing stages.

Antonio had a late, late effort as the English team went in search of a leveller right at the end of added-time, but it was charged down.

And so, when Swiss referee Sandro Schärer blew his whistle for full-time, West Ham were down - but certainly not out of the Europa League by any measure.