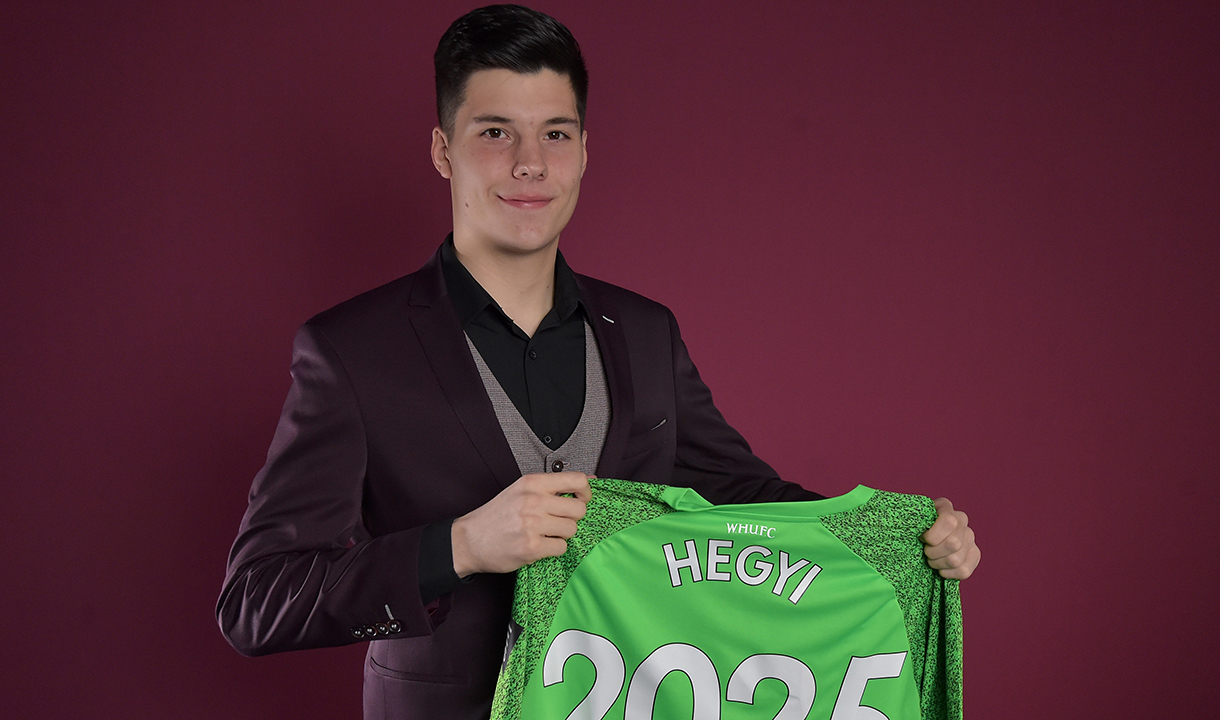 West Ham United is pleased to announce that Krisztián Hegyi has signed a new three-year deal with the Club.

The Hungary U21 international goalkeeper, who initially joined West Ham United in May 2019, has extended his stay with the Irons until the summer of 2025.

The 19-year-old has continued his development in the 2021/22 campaign by featuring regularly for the U23s side, making 18 appearances in all competitions, including 14 in Premier League 2 Division 1.

“I feel at home here. I live five minutes from the training ground, so I know the area, and I really like it. London is a really good city with a lot of things to do, so that’s a major plus for staying here a well.

“I shared the news with my family and they were obviously very happy. My Mum and Dad were buzzing for me and the rest of the family were as well. I’m very thankful for my family. They’ve always been behind me.

“I’m really thankful for my coaches as well because they always push me and I’m happy to continue to my work with them.

“I think this is a big moment, another step in my career. I can’t wait to continue my career with West Ham.”

Regarded as one of the brightest goalkeeping prospects in Europe, Hegyi has made a significant impression since making his debut for West Ham United U18s in April 2019.

It did not take long for the shot-stopper to become a crucial cog in Kevin Keen’s young Irons, as the U18s claimed second place in the curtailed 2019/20 U18 Premier League South table.

Hegyi would also go on to make his first outings for the U23s in the 2019/20 campaign, earning his debut in a 3-1 EFL Trophy loss to Exeter City in one of four appearances at that level.

After 19 outings for the U18s in the 2020/21 season, Hegyi has established himself as the first-choice goalkeeper in Mark Robson’s U23s team this year as West Ham lead the way at the top of the Premier League 2 Division 1 table.

First-team goalkeeping coach Xavi Valero has worked closely with Hegyi since the Hungarian youngster moved to east London and believes the 19-year-old is on his way to fulfilling his potential.

Valero said: “When we signed Krisztián a few years ago as a very young goalkeeper, we thought he was one of the best young goalkeepers in Europe, and I think he is fulfilling those expectations.

“You have different types of goalkeepers; some of them are very reactive, very physical. Krisztián is very balanced, and I think he can manage, with consistency, all aspects of the game.

“He’s still a young goalkeeper, only 19-years-old, but this season he has become the number one for the Hungary U21s, surpassing other older goalkeepers in his country. He’s a young prospect who gives you a feeling of being able to control the game from a very balanced and consistent point of view.

“He has been developing step by step. He has played consistently as a No1 for the U18s and then, this season, playing as the No1 for the U23s. They’re doing great as a team and he, on a personal level, is performing very well.

“I think it’s good news that, as a Club, we’re able to retain the young talent. I believe Krisztián is one of the young goalkeepers we have that has the potential, in the future, to be a part of the first-team squad.”

Hegyi’s performances for the U23s this season have led them to the top of the division, with the side conceding the fewest goals in the league this campaign.

The shot-stopper is relishing his first season as a regular in the West Ham developmental squad and, having extended his stay with the Irons, is eager to keep working hard to achieve his aspirations of playing at London Stadium for David Moyes’ first team.

“I’m enjoying this season. We’re top of the league and we’re doing really well. We’ve conceded the fewest goals in the league as well so, as a defence and as a team, we’re doing well. Hopefully we can keep going and get a bit more out of the season.

“I’m very happy for my teammates and, hopefully in the coming seasons, I can play at London Stadium in front of the West Ham fans. It will take a lot of hard work but I can’t wait for that opportunity.

“My dream is to play at London Stadium for West Ham and hopefully I can achieve that.”

Everybody at West Ham United would like to congratulate Krisztián on his new contract and wish him all the best for his future in Claret and Blue.