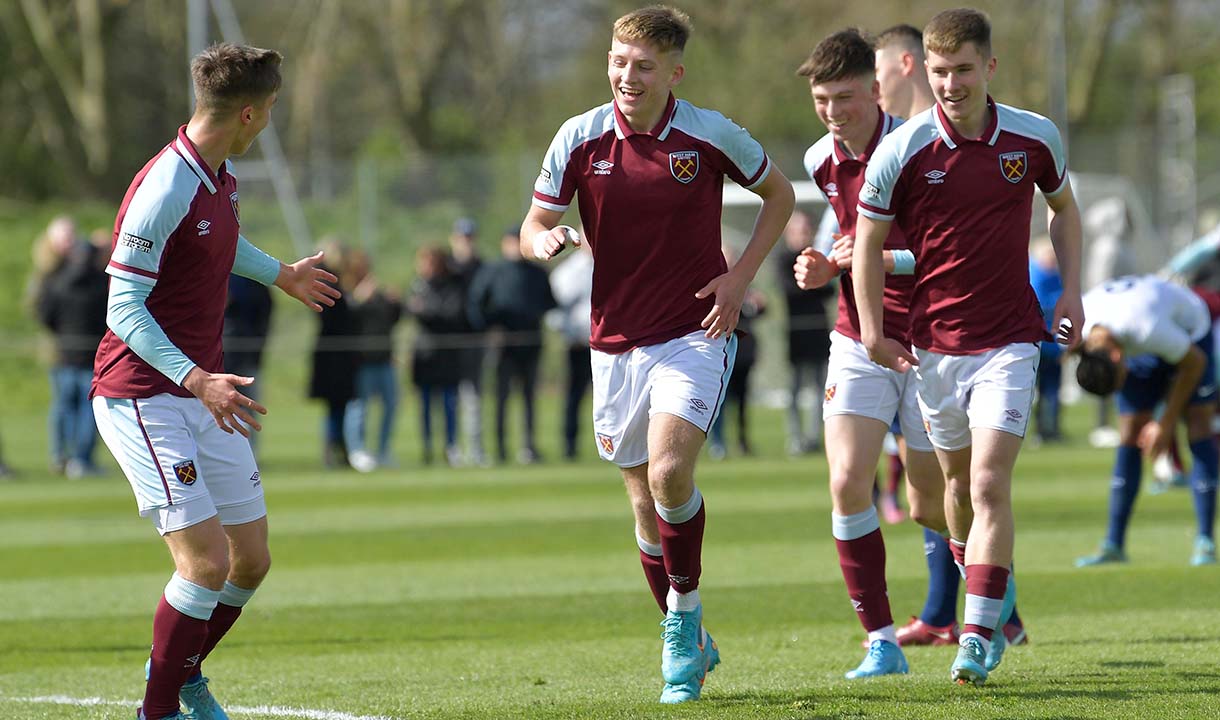 The victory ensures that Kevin Keen’s young side remain hot on the heels of Southampton, with West Ham just one point behind their title rivals in the U18s Premier League South table, albeit with the Saints having one game in hand.

After a first half stalemate, the Hammers flew out of the traps in the second half and took the lead just before the hour mark, with Remy Coddington converting cleverly from a corner.

The lead was doubled after an unfortunate own goal for Chelsea's Harrison Murray-Campbell, before Gideon Kodua adding to his tally for the season with just a few minutes remaining.

U18 lead coach Kevin Keen was delighted with the performance.

"It was really important to win the game,’ Keen evaluated. "The Tottenham game was really disappointing, but you have to put it into perspective and reflect on our fantastic run before that match. It was a little bit of a dip, but we made up for it in the way we played in this game.

"The first half was a bit of a stalemate, but I thought that we were the better team. The one thing we lacked was the final product.  We weren’t working their goalkeeper. We spoke at half time about adding a bit more quality in the final third.

"We said that it could even be from a set piece, which it was in the end. From there it was about work rate, and we forced a mistake for the second goal. The third goal was fantastic, George Earthy did really well and then once again it’s a substitute coming on and making an impact and Gideon Kodua certainly did that."

We had a little bit of a dip, but we made up for it in the way we played in this game.
Kevin Keen

After a quiet opening quarter of an hour, Chelsea registered the first chance of the match. Edwin Andersson cut inside from the left wing and fizzed a strike towards goal, but the effort was comfortably caught by Jacob Knightbridge.

The best chance of the half came just after 20 minutes as Louis Flower raced onto a throw ball. The Chelsea striker found himself one-on-one with Knightbridge and was able to flick the ball over the West Ham goalkeeper. However, he was unable to find the back of the net from a tight angle.

After weathering a period of Chelsea possession, the hosts worked an opportunity of their own. Junior Robinson collected the ball on the right side of the Chelsea box before firing the ball dangerously across the face of goal. Divin Mubama was able to get a touch on the effort, but his strike was well blocked.

West Ham’s struggles in front of goal in the first half looked to only have spurred them on as they came out for the second half full of intensity.

The development side took control of the match and almost took the lead through Lewis Orford; the midfielder’s close-range effort was saved superbly by Prince Adegoke. Robinson looked set to finish on the rebound, and he would have, but for a brilliant goal line block.

Having showed intent from the start of the second period, the Hammers took a deserved lead on 58 minutes. Coddington latched onto Oliver Scarles’ in-swinging corner and delicately flicked the ball into the net.

Keen was full of praised for Coddington after a superb performance from the young forward, following his return from injury.

“I think everyone at the Academy is delighted for him. He’s had a tough, tough season. He pulled his hamstring in preseason and then did it again around Christmas time just as he was coming back. He’s put a lot of hours in the gym, with the sports scientists and with the medical team, all who have been fantastic, they need full credit for the way he’s come back.

“We’ve been patient with him and he’s been coming off the bench a lot, but this week in training he forced my hand. He’s been fantastic in training, really sharp and back to his best so he fully deserved the goal. I think out of all the goals this season, that gave everyone the biggest lift. It was a brilliant finish too.”

With just two games remaining, Keen highlighted the importance of finishing the season on the front foot and applying pressure to Southampton.

"We spoke after about trying to win our last two games and putting Southampton under pressure. They have the advantage, but you never know what can happen, it all gets a bit nervy at the end of the season.

"We have an under-17 Cup final this week and some of the U18s will be playing in that, and then it’s Brighton away next week which will be tough."

Academy graduates Declan Rice, Mark Noble and Ben Johnson were all in attendance, alongside first team coach Kevin Nolan and Keen suggested that this gave his team a slight boost.

"I don’t think there will be many U18 games in which the club captain, the vice-captain and other first team Academy graduate are in attendance. Kevin Nolan was over there too, and they all came over to watch the team.

“I think it was one of our best performances of the season and I think part of that is down to the fact that we have players in our first team taking time to come over and watch the younger boys. I really think that helped inspire us. It shows exactly what kind of club West Ham is."