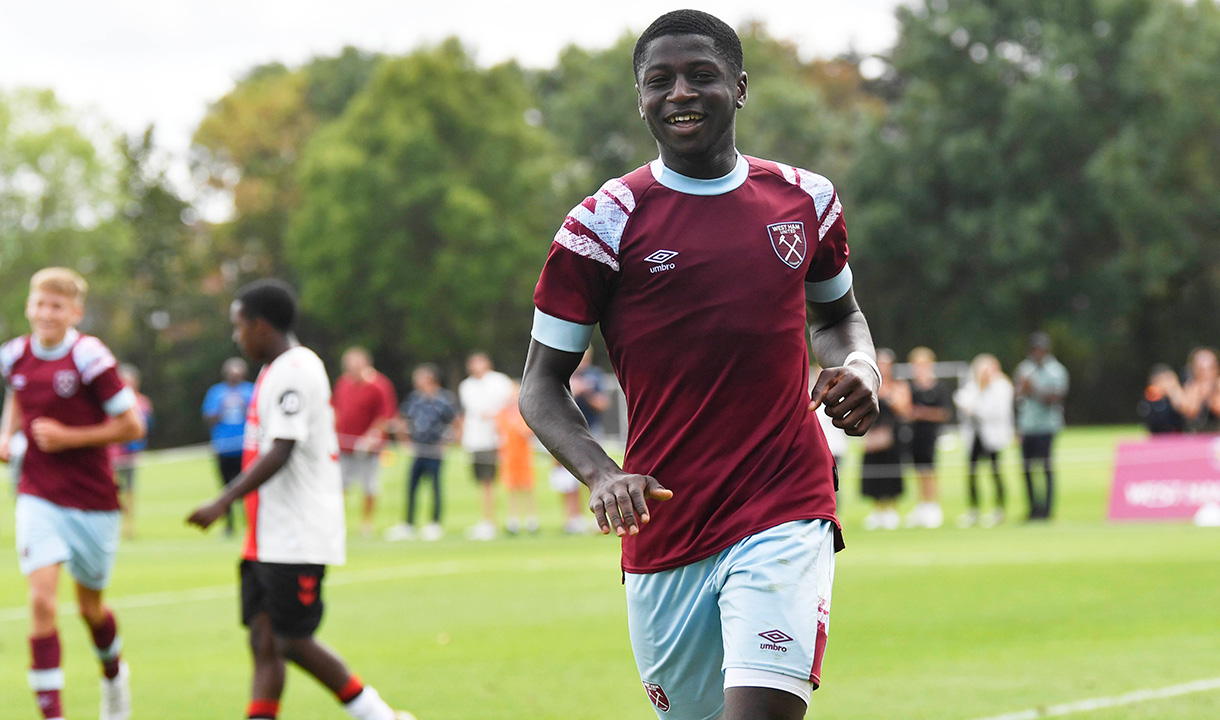 West Ham United U18s produced an incredible second half performance to come back from two goals down and claim a 4-2 victory against Chelsea.

The young Hammers were 1-0 down within five minutes of Tuesday's match, while Chelsea doubled their lead just ten minutes later courtesy of Leo Castledine’s penalty.

Kevin Keen’s U18 side responded superbly in the second period though, scoring three times in the space of five minutes to take the advantage.

Callum Marshall pulled one back on the hour mark and Gideon Kodua levelled the scoreline just one minute later. Kaelan Casey headed the Hammers in front before Kodua secured his brace and the three points in added time.

The Irons are now twelve points clear at the top of the U18s Premier League South table, having won in each of their opening nine matches of the season.

U18s lead coach Keen was full of praise for the mentality of his side after a difficult start to the match.

A match away to Chelsea is always tough and it’s even harder when you are 2-0 down. The response over the next 50 minutes was fantastic.
Kevin Keen

“It wasn’t the start that we wanted,” Keen told whufc.com. “Chelsea were really fast out of the blocks and we didn’t quite match them. They scored a really impressive first goal and then we were really unfortunate with the penalty.

“We were disappointed at that moment because that is not a position that we want to be in after a quarter of an hour. A match away to Chelsea is always tough and it’s even harder when you are 2-0 down. The response over the next 50 minutes was fantastic. I thought that we were very good in the 25 minutes before and after half time.”

The hosts made a fast start and Chelsea took the lead inside the opening five minutes. Tudor Mendel-Idowu committed several West Ham defenders with his mazy run down the right hand side. The attacking midfielder reached the byline before crossing the ball to Donnell McNeilly, who had found space in the box. The Chelsea No9 took a touch before firing a low effort into the net on the half volley.

Chelsea doubled their lead on 14 minutes from the penalty spot after Billy Bates was harshly penalised for handball. Castledine stepped up and smashed the ball into the top right corner past Finlay Herrick.

After a disappointing start to the match, the Hammers looked to respond immediately. Lewis Orford found space in the centre of the pitch and his fantastic cross was met by Divin Mubama, but his powerful header flew just wide of the post.

Keen’s side continued to press in search of a goal. George Earthy’s driving run created space for Oliver Scarles on the left flank. The wing back’s low driven cross was met by the onrushing Marshall but his left footed effort was well saved.

The young Irons’ best opportunity of the first half came just before the interval. Patrick Kelly’s fantastic pass presented Marshall with a shooting opportunity. Max Merrick was on hand to save Marshall’s initial effort and Orford’s rebound attempt forced the Chelsea shot-stopper into a superb double save.

After a dominant start to the second half, West Ham’s pressure was rewarded just before the hour mark.

Orford’s well timed interception rolled towards Scarles, who immediately played the ball over the top of the Chelsea defence towards Marshall. The No10 was forced wide by the Chelsea defence but the striker was still able to precisely strike the ball into the bottom right corner, leaving Merrick with no chance.

Keen’s side found an equaliser just a minute later. Earthy found space on the left wing and the midfielder whipped in a fantastic ball across the face of goal, presenting Kodua with a simple finish just moments after coming on as a substitute.

Casey completed West Ham’s remarkable comeback on 65 minutes. Scarles’ delivery was again perfect, and the towering centre back was on hand to nod the ball into the net from close range.

A match that started with disappointment ended with delight for the young Hammers as Kodua scored his second and West Ham’s fourth of the match. Herrick’s goal kick was flicked on by Mubama, and Kodua raced in behind the Chelsea defence before side footing the ball past Merrick, securing the three points for the Irons.

Despite the Hammers trailing at the interval, Keen was delighted with the response of his side immediately after falling 2-0 behind.

“I was really pleased with how we played after conceding from the penalty,” Keen reflected. “We created several chances in the first half and their goalkeeper made some really good saves. Going into half time, I could see that we were starting to control the game and that chances were coming.

“We didn’t change much at half time for that reason. We still couldn’t find a goal though so we brought Gideon on and went to a back four and that helped us. We scored once and then the floodgates opened. There were some really good goals from our point of view. We showed some fantastic quality during that five minute period in particular which was a really pleasing period of the match for us.”

The young Irons have come from behind to win five of their nine league matches this season and Keen suggested that the mindset of his team will be key if they want to achieve success this season.

“We want to achieve something for West Ham. That’s what football is all about and hopefully we can keep winning matches. Our focus now is on Saturday, we have a tough game against Tottenham so we just want to keep pushing.”

Whilst Keen is delighted with the start to the season, he is determined to stay focused on the challenges to come.

He concluded: “It’s been a good start to the season. We have a really good squad and the quality has been there even when some of the more senior players go off with the U21s. We still have a few more matches to play before Christmas and we want to keep improving.

“Tottenham are a team that we often struggle against so that is the next obstacle that we need to overcome. I also want to give a mention to Finlay Herrick, it was his first start in the league for us today and it is a real achievement to come away from Chelsea on the winning side.”