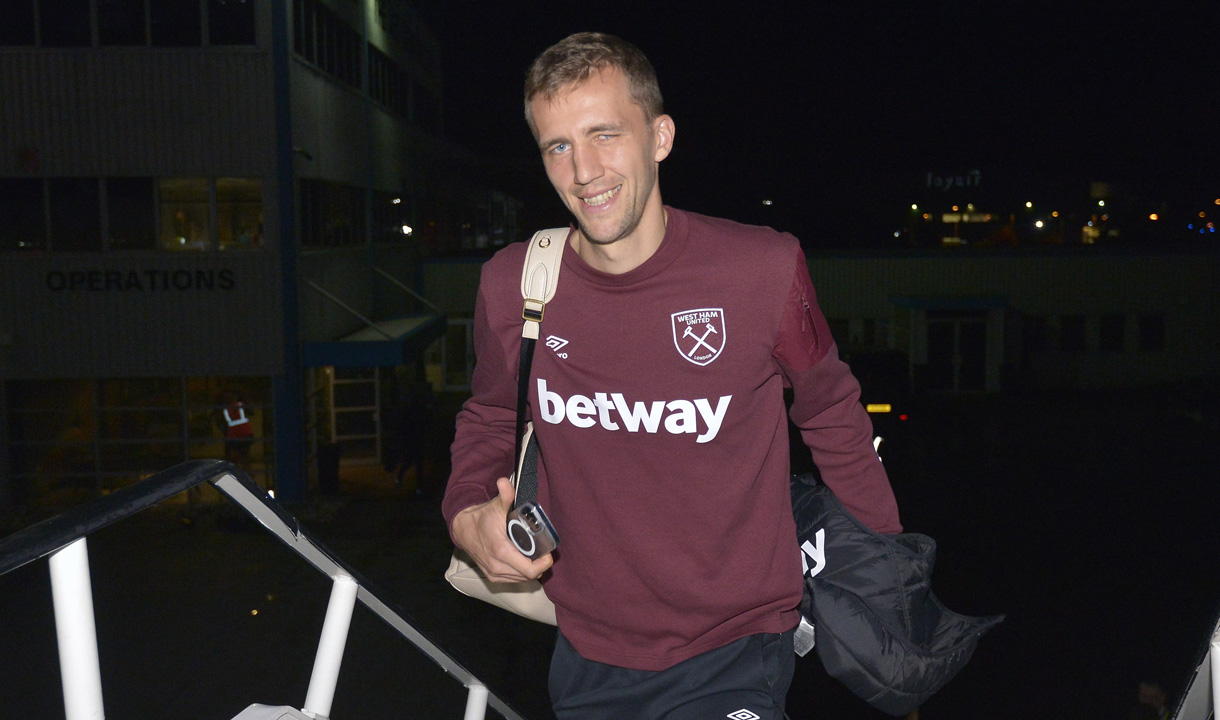 Tomáš Souček: We are in a great way and we want to carry on

Anyone who follows Tomáš Souček on social media will have seen an image of him smiling in training with the Czech Republic in Prague on Monday, less than 24 hours after helping West Ham United to a 3-2 Premier League win over Liverpool at London Stadium.

Sunday’s win marked Souček’s 56th appearance of 2021 and, with two internationals and 12 West Ham matches to be played between now and 28 December, the midfielder could ultimately play an amazing 70 games in the calendar year.

But while some players would relish a day off after such a busy year and a recent schedule of seven games in three competitions in the space of 22 days, the Czech captain could not wait to meet up with his national teammates and start preparing for their final 2022 FIFA World Cup qualifier.

Souček – along with fellow Hammers Vladimír Coufal and Alex Král – host Kuwait in a friendly in Olomouc on Thursday before welcoming Estonia to Prague for their final Group E fixture in Prague next Tuesday.

Rather than take a well-earned week off, the 26-year-old is eager to play in both matches as the Czechs work towards the play-offs, being played in March 2022, which will decide whether they go to Qatar.

Whatever happens in the November internationals, Souček will then return to east London to round out a year packed with memorable moments for Club and country, with West Ham still fighting on four fronts at home and abroad.

Before flying home, the reigning Hammer of the Year spoke to whufc.com…

Tomáš, even with your famous fitness levels, it has been a busy period, but one we can be proud of with six wins in our last seven matches?

“If I can remember, since the last international break, we had four Premier League games and four wins and we had two Europa League and one EFL Cup tie, and in each game we were successful, so maybe it’s a shame that it’s an international break now!

“We all have to be ready for the next game in two weeks and we are all enjoying our lives playing football in front of our fans. We can nice have a nice rest from the Premier League and look at the table and like what it looks like.

“It’s still only eleven games, though, and our next game [at Wolverhampton Wanderers] will be even harder because we are in a really good position and they will be more hungry to beat us, but we are in a great way and we want to carry on.”

It’s nearly two years since you joined at a time we were fighting relegation, so what has changed to bring about our form over the last 18 months?

“When I came, I joined from the best team in my former league (Slavia Prague in the Czech Republic) and, to be honest, I felt we were not in the right way but, since COVID time, we changed mentality in our Club and even at the training ground we want to win each small game.

“Because of this, our mentality and our ambition is going higher and I said before the season that my ambition is that if I am going to play in the league than I want to win the league, because every team has a chance. We take it game-by-game and see where we are at the end.

“We go into each game to win the game and, although anything can happen, we have to do our maximum and show that we want to win.”

Have our results over the past few weeks given us even more belief after we beat teams like Everton, Tottenham Hotspur, Manchester City and Liverpool?

“I think our confidence is the same in every game, and I don’t want to think ‘We are playing against Liverpool or Tottenham and it will be much harder than it will be against other teams lower in the table’.

“I want to go into every game thinking that we have good shape, we are good tactically, are confident and we are ready to win the game. It doesn’t matter if we’re playing against City or Liverpool, someone from another league or someone lower down the table – every game is similar because it is football, so anything can happen and we must be ready.”

Finally, you are off on international duty again this week, which I presume you're looking forward to as Czech Republic captain?

“I fly on Monday morning to Prague and on Monday afternoon we have training! It will be an easy and fun session with some running and ball work, so everyone is looking forward to it and I like it!

“Although we are already in the play-offs because of winning our Nations League group, we have our last qualifier which we want to win and we want to finish strong because we want to please our fans and also prepare for our play-off for the World Cup.

“I hope it’s like here at West Ham and we win both games. I like this life of a footballer and I want to play in both games!”