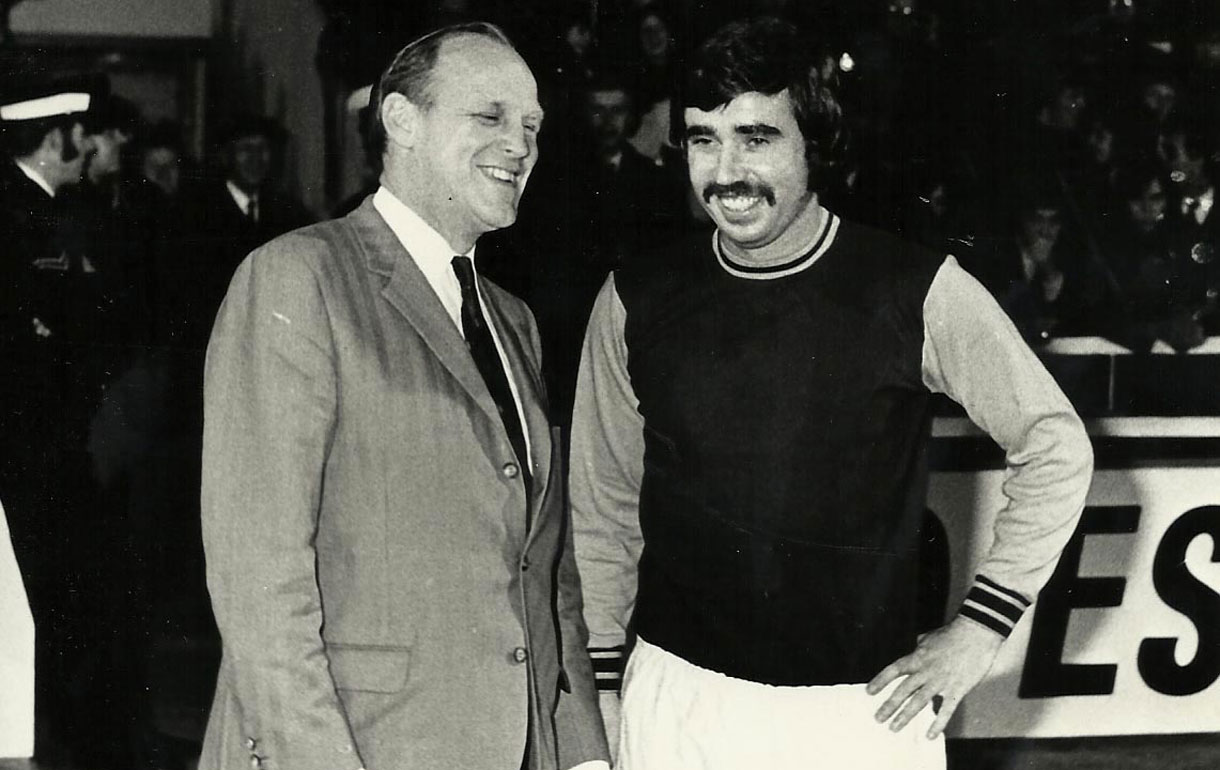 West Ham United honoured one the Club’s all-time favourite sons with a memorable Testimonial match on this day 47 years ago.

Nearly 20,000 supporters descended on the Boleyn Ground on the evening of Monday 13 November 1972 to celebrate the loyal, illustrious and successful career of long-serving midfielder Ronnie Boyce.

Born just a short distance from Upton Park in East Ham, Boyce joined his local side as a schoolboy, before making his first-team debut at the age of 17 in a 5-2 First Division victory over Preston North End in October 1960.

And sitting alongside O’Farrell in the Red Devils dugout was coach Malcolm Musgrove, who had scored a hat-trick in that win over Preston.

In between his debut and his Testimonial, the tireless Boyce had made well in excess of 300 appearances, covered hundreds of miles and scored some of the most-important goals in West Ham United history.

In March 1964, ‘Ticker’, who was presented with a watch in honour of his stamina-based nickname, netted twice against Testimonial opponents Manchester United in a dramatic FA Cup semi-final win at a muddy Hillsborough.

Six weeks later, it was the proud East Ender who popped up in the last minute of the final to head Peter Brabrook’s cross into the Preston net and secure the Hammers’ first major trophy.

And come September of the same year, it was Boyce who scored the first European goal in West Ham history, in a 1-0 European Cup Winners’ Cup first-round first-leg win over La Gantoise in Belgium.

The following May, he was back at Wembley alongside his great mates Bobby Moore, Geoff Hurst, Ken Brown and Brian Dear, helping the Hammers defeat TSV 1860 Munich and win another piece of silverware.

Boyce’s stature meant his Testimonial was well-supported, while O’Farrell honoured him by fielding a strong team that included Bobby Charlton, George Best and Sammy McIlroy.

Sadly, international duty meant Bobby Moore and Denis Law could not be present, but the 19,247 fans who turned out were still treated to a thrilling evening of football.

Two goals from Dudley Tyler either side of McIlroy’s equaliser had the Irons in front at half-time, before two from Pop Robson and one from Trevor Brooking put the game well beyond the visitors.

Brian Kidd did pull a goal back for the Red Devils late on, but it could not ruin a memorable evening for Boyce, who would make his final first-team appearance against Leicester City two months later.

Boyce finally retired in 1995 and was recognised with the Club’s Lifetime Achievement Award in May this year.