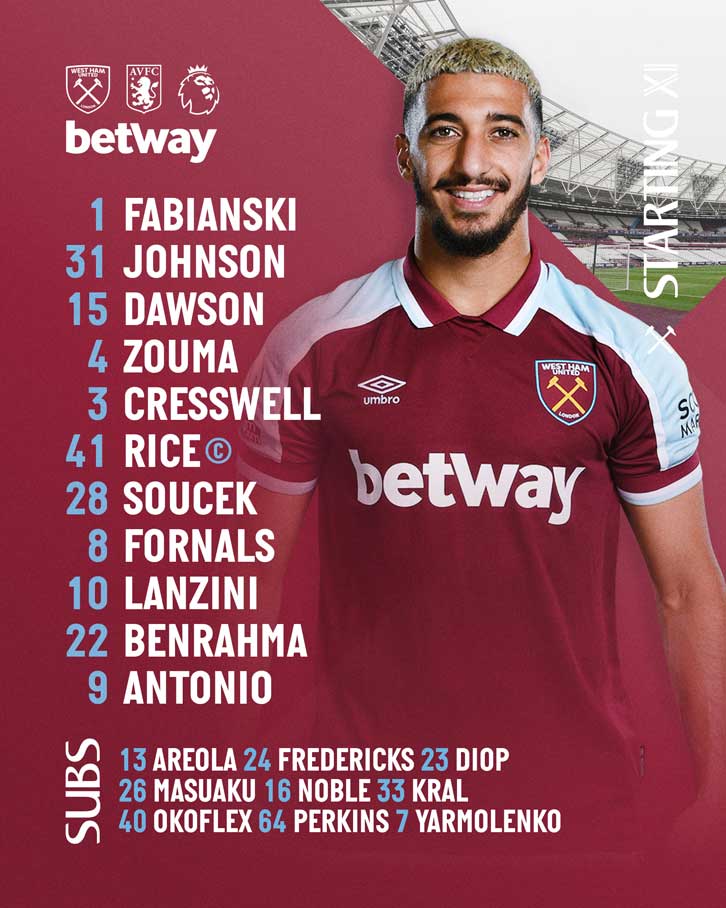 Saïd Benrahma has been named in the West Ham United starting XI for this afternoon's Premier League match with Aston Villa, while Andriy Yarmolenko returns to the matchday squad.

Benrahma's inclusion in the starting XI is one of two changes for David Moyes' Irons from Thursday's UEFA Europa League round of 16 first leg against Sevilla, with goalkeeper Łukasz Fabiański also returning to the team.

Midifelder Yarmolenko is certain to receive a rapturous reception from the 60,000 in attendance at London Stadium this afternoon after being named in the squad for the first time since mid-February, after being granted compassionate leave in the midst of the crisis engulfing his home country of Ukraine.

Experienced shot-stopper Fabiański comes back into goal for his 307th Premier League appearance while the Irons back-four remains unchanged; Ben Johnson - who scored in the away tie against Aston Villa in October - Kurt Zouma, Craig Dawson and Aaron Cresswell continue in defence for the side.

Declan Rice, who missed the last Premier League outing due to illness, is back in midfield and captains the team on appearance number 158 in the Premier League, partnering Tomáš Souček in the centre of midfield.

Benrahma makes his first start since the home draw with Newcastle in mid-February and will be joined by Manuel Lanzini and Pablo Fornals in supporting Michail Antonio up front.

Alphonse Areola, Ryan Fredericks, Issa Diop, Alex Král and Arthur Masuaku are also options, as are U23s forward Armstrong Okoflex and Sonny Perkins, who combined to score for the developmental side away to Chelsea on Friday evening.