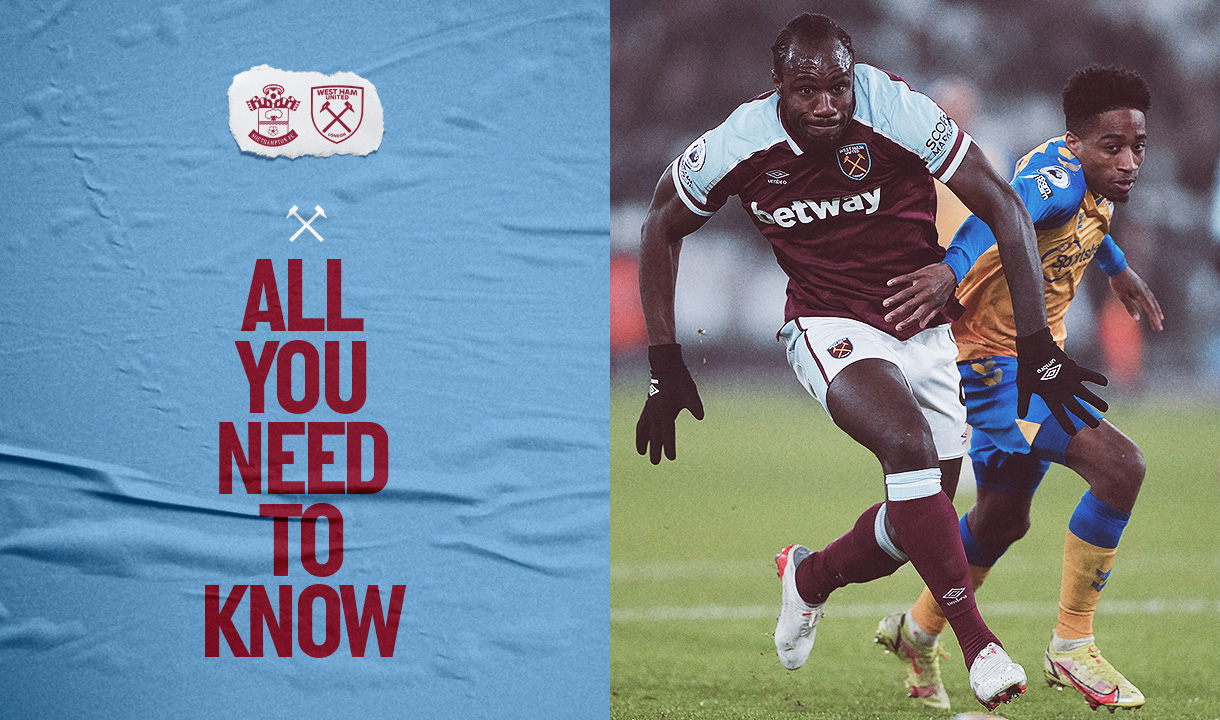 Southampton v West Ham United - All You Need To Know

West Ham United head for the South Coast to face Southampton in the Emirates FA Cup fifth round on Wednesday evening.

The tie will pit the Hammers against their Premier League rivals in a 7.30pm kick-off at St Mary's Stadium, with the winners progressing to the sixth round and within a victory of playing at Wembley Stadium in the semi-finals!

David Moyes' men - and a 4,802-strong Claret and Blue Army - travel to Hampshire in buoyant mood after an improved performance brought a 1-0 Premier League win over Wolverhampton Wanderers at London Stadium and extended the Londoners' unbeaten run to five matches in all competitions.

The Irons will need to play well, really well, to defeat the Saints, though, as Ralph Hasenhüttl's side have lost just one of the 14 matches they have played on home turf in 2021/22 - a 1-0 Premier League defeat by Wolves back on 26 September last year.

West Ham reached the fifth round with a 2-0 home win over Leeds United before sneaking past National League North challengers Kidderminster Harriers 2-1 in extra-time, while Southampton needed an extra 30 minutes to defeat EFL Championship sides Swansea City and Coventry City 3-2 and 2-1 respectively.

Wednesday's tie will kick-off at 7.30pm.

Our allocation of 4,802 Standard Tickets sold out to Season Ticket Holders and Bondholders with 10+ Priority Points. For Accessibility Ticket information, click here.

For supporters travelling to St Mary's Stadium, click here to view our Over Land and Sea guide to Southampton.

However, tickets are on General Sale now for our upcoming home games versus Aston Villa on Sunday 13 March, Sevilla in the UEFA Europa League on Thursday 17 March and Everton on Sunday 3 April.

Wednesday's tie will be broadcast live on the BBC iPlayer, the BBC Red Button and BBC Sport Website.

Andriy Yarmolenko has returned to training at Rush Green after being granted compassionate leave in the midst of the crisis engulfing his home country of Ukraine.

The Eastern European country was invaded by Russian forces last Thursday, quickly advancing on the northern city of Chernihiv, where the West Ham United grew up, and a number of other large population centres, including the capital Kyiv, where Yarmolenko played for the country’s leading club Dynamo for a decade.

On Friday, Moyes revealed the No7 had requested and been granted time off, but the forward has made the voluntary decision to return to Rush Green and train with his teammates on Monday. However, the manager said in his pre-match press conference that the 32-year-old will not be rushed back into competitive action.

Wednesday's game will see Michail Antonio face his former club, having helped Southampton win the Football League Trophy during a season-long loan from Reading in 2009/10.

Both VAR and Goal line technology will be in operation for Sunday's tie.

Nine Substitutes can be named of which five can be used. Clubs have three occasions during open play to make substitutions (excluding half-time) – multiple substitutions can be made during each occasion.

Each Club shall also be permitted to utilise up to two ‘concussion substitutes’, as appropriate.

Southampton have enjoyed something of a resurgent 2021/22 season under Ralph Hasenhüttl.

The Saints finished 15th in the Premier League last term, having been as high as third in the table after 13 matches played.

A devastating loss of form in the New Year saw Southampton lose six Premier League games in a row, including a 9-0 defeat at Manchester United, and the Hampshire club collected just 14 points in their final 21 top-flight matches.

Hasenhüttl's position was called into question, but the Austrian has regrouped, recruited well last summer and has led the Saints into the top ten in the Premier League and the FA Cup fifth round.

The signings of full-backs Tino Livramento and Romain Perraud have added vibrancy down the flanks, while young Albania centre-forward Armando Broja has provided a focal point in attack during his season-long loan from Chelsea.

Southampton's form has been outstanding at home, where they have lost just once in 14 matches in all competitions, while they have drawn both Premier League matches with leaders Manchester City.

The Saints have won the FA Cup once in their history, as a Second Division side, shocking top-flight Manchester United 1-0 at Wembley Stadium in 1976 through Bobby Stokes' 83rd-minute goal.

Southampton reached the final again in 2003, but a Robert Pires goal saw Arsenal settle the final between the two Premier League clubs at the Millennium Stadium in Cardiff.

And Wednesday's hosts have reached the semi-finals twice in the previous four seasons, losing 2-0 to Chelsea in 2018 and 1-0 to Leicester City in 2021.

West Ham United have won all three previous meetings with Southampton in the FA Cup.

The last time we faced the Saints in the competition was in the third round back in 1975, when goals from Frank Lampard and Bobby Gould secured a 2-1 win. West Ham went on to lift the trophy for the second time in our history a few months later.

Prior to that, we also won a fourth round second replay (at Villa Park!) on the way to our first appearance in the final in 1923, having also got past Southampton 3-1 in the first round in 1920 in our first season as a League club.

Marriner, who turns 51 on New Year’s Day, was added to the Select Group of professional referees in 2005, and FIFA’s list of international officials in 2009.

Marriner has refereed a host of high-profile fixtures, including the 2010 Championship Play-Off final between Blackpool and Cardiff City and the 2013 FA Cup final.

He has refereed West Ham United on 41 occasions previously, with the most recent being our 3-2 home Premier League win over Chelsea in December 2021.