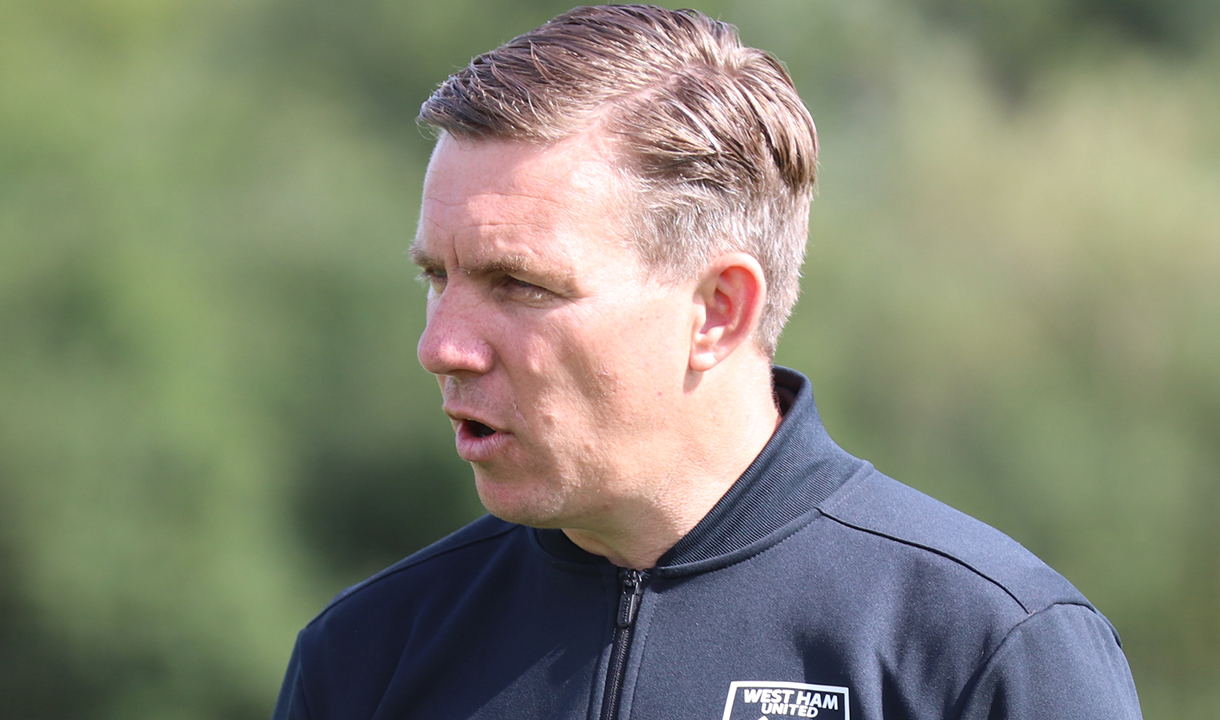 Ricky Martin: I’m proud of the Academy of Football’s development this season

On results and debuts alone, Academy Manager Ricky Martin has plenty of cause to reflect with pride on the first half of the season.

That West Ham United have done so whilst fostering an inclusive, education and fulfilling environment makes Martin just as proud, as he looks back on the successes of 2021/22 so far – and with the promise of more to come…

What are your overall thoughts on the first half of the campaign for the Academy, Ricky?

I’ve got to say I’m very proud due to not only the performances of our teams and individual players, but also the really positive development which has gone on throughout the whole Academy, from the Foundation Phase right the way through to the Professional Development Phase.

This season has been the closest we’ve been to a normal programme for a couple of years. We’ve benefitted from that structure, and individual players have really developed and kicked on.

That has resulted in some of our teams doing very well, with the U16s progressing through in the Premier League Cup, which they will continue in the new year, and also getting to the national finals of the Premier League’s U16 tournament.

The U18s have had some very good performances in the league, developed as a team and have had players progressing into the U23s, and with the U23s, we’re obviously very pleased for them, sitting top of the table going into the new year.

Another area of development I’ve been really connected to is the work we’ve done on our staff recruitment, ensuring we bring in highly-skilled and qualified experts, some of whom also have a great connection to the Club.

We talk about developing players the West Ham Way, and we’ve been able to recruit staff who, themselves, were developed the West Ham Way. This really helps to create a positive environment, conducive to player development.

How do you look back on the first-team fixture against Dinamo Zagreb, a remarkable night for the Academy of Football?

The success of individuals and the teams within the Academy is the foundation and platform for our young players to progress into senior football. Ultimately, it is always about progressing players into first teams, so that night against Dinamo Zagreb was a very special one for the Academy.

Seven of the U23s players featured, and of the five starters, two of them were U18s. That’s a great motivation to the rest of our Academy players, showing what they could achieve at West Ham.

Off the back of that, Harrison Ashby has made his Premier League debut. The first team have done extremely well in all competitions this year, and for Harrison to actually get on the pitch was a reward for all his hard work and efforts to date.

After the game, Mark Noble spoke to the West Ham TV cameras to compliment the youngsters not just as footballers, but as young people…

One of our core values is togetherness, and the togetherness of all our multi-disciplined staff at the Academy.

Everyone is connected to the success and failure of any Academy programme that we have, and at the moment, the staff, supporters, families and parents are all working hard together and seamlessly to ensure that progression continues. Mark Noble reflected that so well in his words after the game.

Mark also plays a big part in that, as a motivator to our young players, and he’s also part of our Academy Technical Board, another area we’ve really developed this year, consisting of first-team staff and Academy senior staff, to discuss our young players and highlight, push and promote them as and when we see fit.

Within the overall Academy programme, that’s one thing I’m really proud of: our Equality, Diversity and Inclusion work, and the forums, groups and life skills programme we deliver to our players.

Some of this work goes on behind-the-scenes, and some is more prominent, but we’re delighted with the work we’ve done within this space, both internally and within the community.

When you look back over your two-and-a-half seasons as Academy Manager, do you see an element of continuous improvement?

It’s hard for me to personally make that statement myself – I can only go on feedback that I receive from the opposition, on match-days and at different events around the country.

The common message I’m receiving at the moment is that they see our teams being more competitive than they have been in many years, so that’s probably the easiest way for me to reflect and know that the Academy is progressing.

It’s also really welcoming when you hear the manager complimenting the U23s squad in his press conferences. He’s played a big part in that, setting the standards he expects at West Ham.

The manager wants any team who represents the Club to be competitive and looking to win games. That’s the environment and mindset that’s certainly been created in the first team and it’s trickled down into the Academy, the U23s and the U18s.

As Academy Manager, what do you hope for from the second half of the season?

Obviously, we’ve set standards now of what we expect both on and off the field.

It’s up to us to build on those foundations and the connection that we have with the first team, and to really have an impact and to develop our Academy even further.

We won’t be resting on our laurels or relaxing in the second half of the season. We want 2022 to be a fantastic year for the Academy, our individual players and the development of our staff, so we will build on the fine work we’ve put in place.

I’d just like to wish everyone at the Academy a successful 2022. I’m really excited with the quality of our players and our dedicated staff, who work tirelessly to help create the next generation of West Ham United players.

Merry Christmas and a Happy New Year to our West Ham family. Come on you Irons!