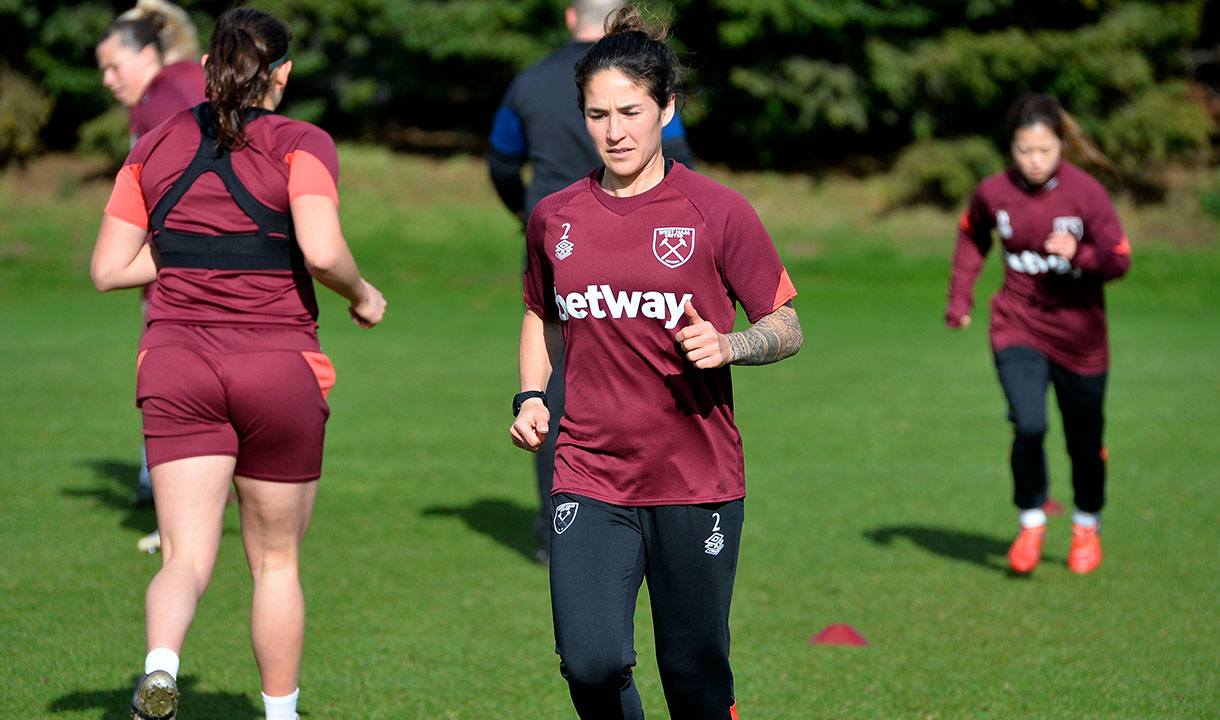 West Ham United are back in Vitality Women’s FA Cup action on Sunday afternoon, when they take on Reading in the Fifth Round of the competition at the Select Car Leasing Stadium.

The Hammers overcame FA Championship outfit Sheffield United at the end of January took book their place in the fifth round and will be hoping to beat the Royals to advance into the quarter finals.

However, Reading are expected to provide stern opposition, and Olli Harder’s side will have to be at their best to reach the latter stages.

Tickets for the game at the Select Car Leasing Stadium are available to purchase from the Reading FC website, which you can visit by clicking here.

Unfortunately, the game will not be available to watch live, so the only way to watch the action will be to attend!

With an international break between their most recent fixture against Leicester City, players that didn’t head off have been working hard at the team’s Chadwell Heath Training Ground.

After missing out against the Foxes, Lucy Parker has recovered from her knock that she sustained against Aston Villa the previous weekend and is available for the clash in Berkshire.

Maisy Barker and Grace Garrad are confirmed absentees and are continuing with their individual recoveries.

The likes of Dagny Brynjarsdottir and Katerina Svitkova are returning from international fixtures, so Harder and his coaching staff will have to assess those players when they arrive back in east London.

Further team news will be available from 1pm on Sunday!

After a slow start to the campaign, Reading have managed to climb up the Barclays FA Women’s Super League table and sit one place above the Hammers in sixth place.

The Royals lost their opening four matches of the season, but since then have only lost one of their previous nine in league competition, which makes them one of the most in form outfits in the division.

However, like the Hammers, they tasted defeat in their last outing - a 4-1 defeat to Brighton and Hove Albion at The Peoples Pension Stadium.

Last time the two sides met was in a 2-2 draw in November at the Chigwell Construction Stadium, as Emma Harries scored an injury time equaliser to share the spoils – which was incidentally Reading’s only draw of the season so far.

In the FA Cup, the two sides met in the Semi-finals of the competition back in 2019, where the east Londoners booked their place in the semi-final with a penalty shoot-out win. From the side that played against the Royal on that day, only Gilly Flaherty and Kate Longhurst remain.

Deanne Rose: An explosive winger, the 22-year-old Canadian has had a solid debut season so far in the FA WSL. At just 22 years of age, Rose has 61 caps for her country – and this season for Reading, has scored three goals and two assists.

Natasha Dowie: At 33-year-old, Natasha Dowie is still a huge threat. The forward has six goals this season and will be the Royals’ main goal threat on Sunday.

Emma Harries: A 19-year-old attacker that scored the decisive equaliser in the first meeting between the two sides – Harries has three goals this season for Reading. Harries recently featured in for England U23 in the international break.

Tickets are available to purchase from the Reading website by clicking here!