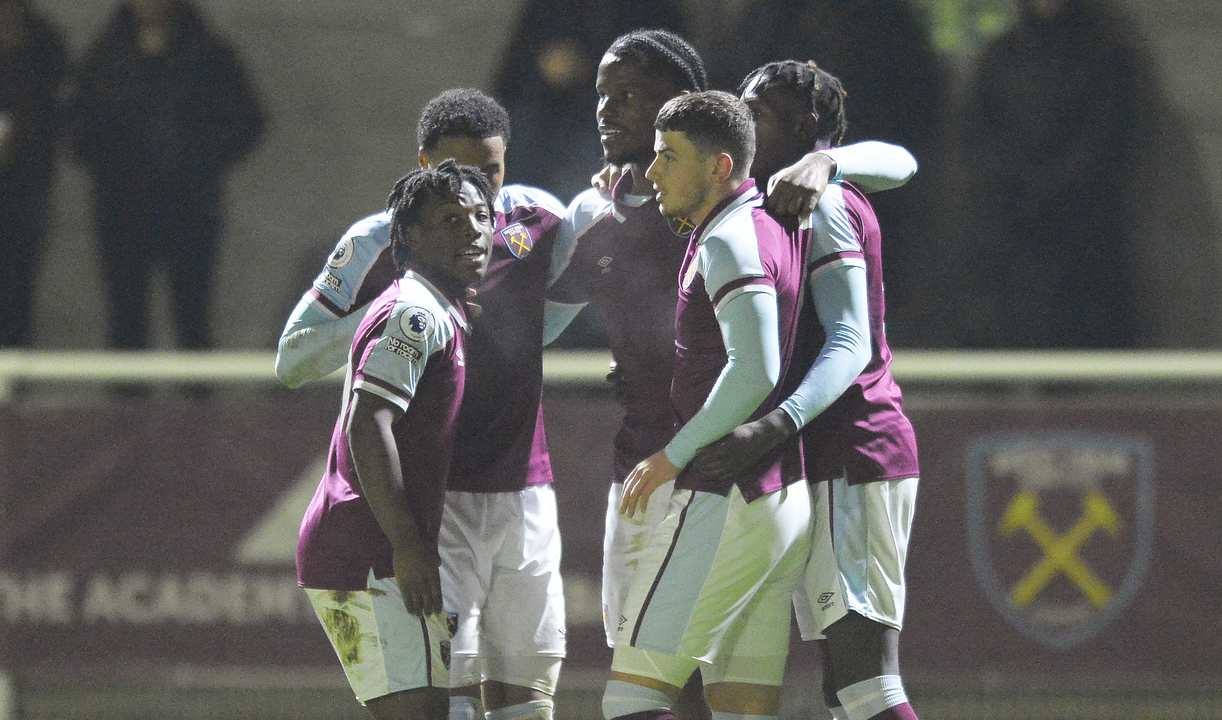 Pierre Ekwah: Leeds win is a great start to 2022

A goal, a clean sheet and three points in the bag all add up to a superb start to 2022 for Pierre Ekwah and West Ham United U23s.

Ekwah bagged the Hammers’ first goal in a 3-0 victory over Leeds United on Monday evening to extend West Ham’s lead at the top of the Premier League 2 Division 1 table to four points.

Conor Coventry, in his first outing since returning from loan, and Armstrong Okoflex would also net for Mark Robson’s Irons in a deserved win at Rush Green Stadium.

Midfielder Ekwah was delighted to get on the scoresheet for the second time this season, but was even happier at the overall result and performance after almost a month without a game for the U23s.

“I think this a great start to the year for us," Ekwah told whufc.com. “We need to get back on track because we didn't have a game for so long, so the first game of 2022 has been really great.

“It’s a great win and it’s great to secure a clean sheet. It doesn’t get better.

“It’s always good to score. It’s my second of the season now. And it’s always good, but the best thing is us winning and getting another clean sheet again today. It’s brilliant for the team.

“It’s not just winning games. It’s the clean sheet as well. Our attacking has to be good but we have to defend our goal as well, obviously."

It's a great win and it's great to secure a clean sheet. It doesn't get better.

Despite West Ham enjoying the bulk of possession and the better of the chances in the first half, the home side found themselves kept at bay by a stubborn Leeds side.

It wasn’t until Ekwah superbly placed a left-footed effort into the bottom corner in the 56th minute that West Ham got a well-earned breakthrough, before Coventry’s powerful strike and Okoflex’s thumping effort ensured victory.

“The second half was brilliant,” the midfielder continued. “I think we had a couple things that we needed to do and, at half time, and the coaches took us through it and talked to us about it.

“And then we just came out and did what they told us to do in the changing room. We brought those lessons onto the pitch and scored the three goals in the second half.”

Having not played a match since 13 December, against Wolverhampton Wanderers, Ekwah noted that the Irons U23s continued their hard work on the training pitches despite not having a scheduled competitive fixture in almost a month.

The 19-year-old feels the intensity has benefitted the side, who maintained their fitness levels up until the final whistle.

He said: “We’re at a Club where we like to be known as a hard-working Club. You won’t burn out if you just work hard and I think that was shown in this game.

“None of us were really exhausted or couldn’t run, come the end of the match. We were still giving 100 per cent for each other and for the team, which is good.”

Ekwah and his teammates face a quick turnaround as they prepare to visit Arsenal on Friday.

The Hammers defeated the Gunners 6-1 in the reverse fixture earlier this campaign but Ekwah knows the north London side - who sit in fourth in the league - will be out for revenge at Boreham Wood.

He added: “It will be a great game, a nice game because they’re up there at the top with us so I think it’s going to be a really good game.

“I think Arsenal are going to be looking to prove a point, but so are we, so we’ll keep going and try to keep our good run going.”