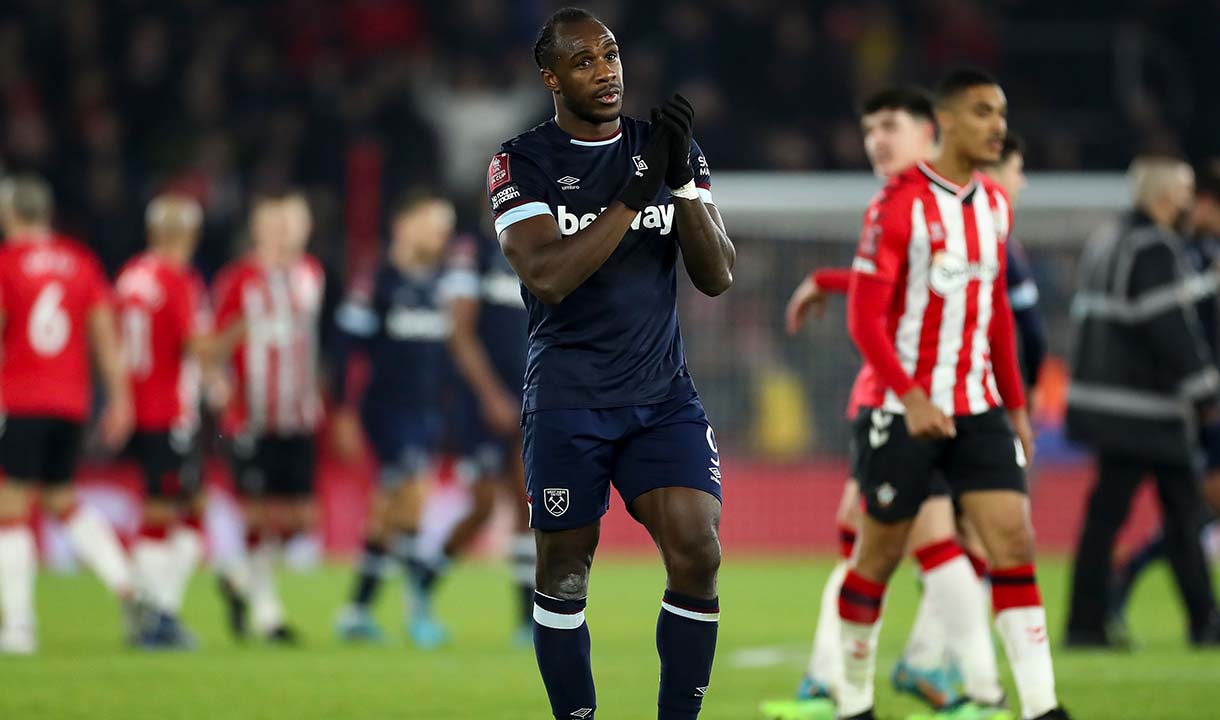 Michail Antonio: We are frustrated - but nothing keeps us down

The No9's first goal since New Year’s Day – a poacher’s finish from a loose ball inside the box – had looked set to provide a platform for the Irons to build upon in the second half, drawing them level following Romain Perraud’s long-range finish for the hosts on 31 minutes.

However, defensive errors proved the Irons’ undoing and, despite arguably having the better of the play overall, West Ham saw their FA Cup journey curtailed for another season.

Nevertheless, whilst paying tribute to the outstanding support provided by the travelling Hammers’ fans -who backed their team vociferously in Hampshire on a weekday night - Antonio maintained that his side will be ready to compete again at Liverpool on Saturday.

We started off quite positively.

We did well until they scored their goal, and then we tried to chase and get back in, and we made a couple of mistakes.

It was a very frustrating night. Onwards and upwards, basically. We’ve got to pick ourselves up from this and go again on Saturday.

It was just a frustrating night.

Obviously we wanted to go further in this competition [the FA Cup] and now we’re out, so all we’ve got to do is concentrate on what we are in now, and that’s the Europa League and the Premier League.

We’re still going for the top four, so with all the negatives that have happened today, we’ve got to think about the positives for the season.

We’ve got the top four chase still and we’re in the last 16 of the Europa League. Let’s just see what we can do with those and keep moving forwards. Onwards and upwards.

I’ve been saying it over the last couple of weeks that I feel like a goal’s been coming.

I worked quite hard for the team against Wolves and managed to get the assist, so I said it was coming – I could feel it.

I managed to get the goal today so hopefully this goal can get me on a nice little run to finish off the season.

The fans were unreal. Even when we went 1-0 down, they were still out-singing the Southampton fans.

They were unbelievable. They helped lift us to get the goal. Even when we went 2-1 down, they were still singing our names, so the fans were unreal and I’d give them applause for that.

Thanks for turning out and hopefully we can do you guys proud on Saturday.

One thing about us is that nothing knocks us down.

We don’t stay down. We get up and we go again.

It’s a big game on Saturday [against Liverpool].

It’s a game to show how we stand in the league, and basically stand our ground - to show that we’re there for the rest of the season.