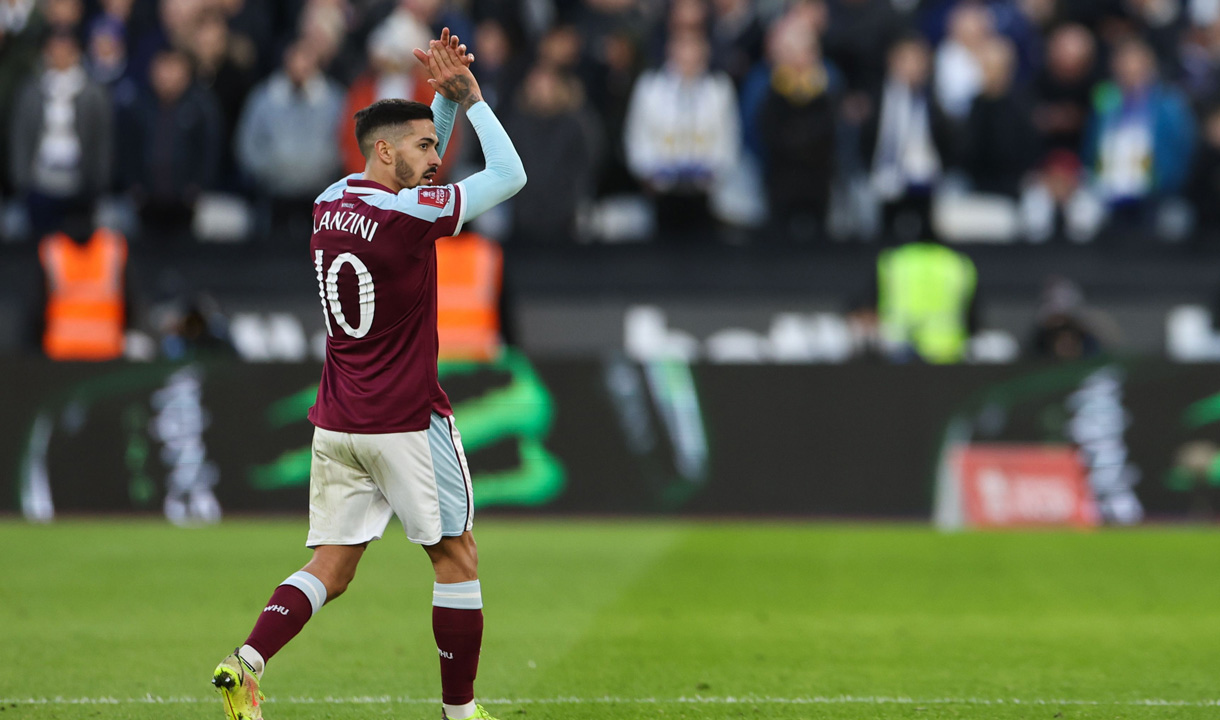 Manuel Lanzini is feeling good on and off the pitch after another match-winning performance for West Ham United.

The attacking midfielder followed his two-goal New Year’s Day show at Crystal Palace with another strike in the Hammers’ 2-0 Emirates FA Cup third round win over Leeds United at London Stadium on Sunday, taking his tally to six for the season.

However, the No10’s goals are just part of the reason why West Ham supporters and the man himself are feeling excited, as his all-round game is arguably at the highest level it has been since before he suffered serious knee injuries in the summers of 2016 and 2018, tragically ruling him out of the Olympic Games and FIFA World Cup finals.

Still just 28, Lanzini is looking sharp, elusive and confident in body and mind, while is ever-growing influence on David Moyes’ team is producing goals and wins on an increasingly regular basis.

Speaking to West Ham TV following Sunday’s win, this is what the long-serving fans’ favourite had to say…

Manu, that’s three goals in two victories to kick-off 2022, so it's been a happy new year?

“I started the year very good, but more important is for me to help the team and score goals and win as it’s important for our confidence, so we need to keep it like this.

“I hope I score more goals. I try to do my best for the team to help us win the games.”

You look like you’re really finding a natural rhythm on the pitch with your teammates?

“It’s easy to play with players like this, as Nikola [Vlašić], Jarrod [Bowen] and Mikey [Antonio]are very good players. Also, we know Leeds follow us each one (by marking man-to-man), which is crazy. The intensity means you move more, so we tried to play together.

“We practiced like this in training and I think we did a very clever game. It’s not easy because they play with great intensity and they have good players, but I think it was a clever game from us.

“We’ll try to play at the same level [when we play them in the Premier League next weekend] and keep going like this and get the same result.”

You’ve been playing in the No10 position in recent weeks, after playing in a deeper role last season?

“I love it there! Like I said, I try to help the team and to get confidence in myself is good. I also like playing in a deeper role because I like to take the ball and help the team keep the ball, so both positions are good for me.”

You also look as if you have full confidence in your body now?

“We need to play like this, keep going like this and work hard because we have a very good team and if we stay like this, we’re going to win more games.”

The atmosphere was special again on Sunday, particularly with it being an FA Cup tie with 8,500 Leeds fans adding to the noise, too?

“It’s amazing. The fans here are amazing and very passionate, so it’s crazy. For me, it’s very good because I came from Argentina, where it’s the same!”