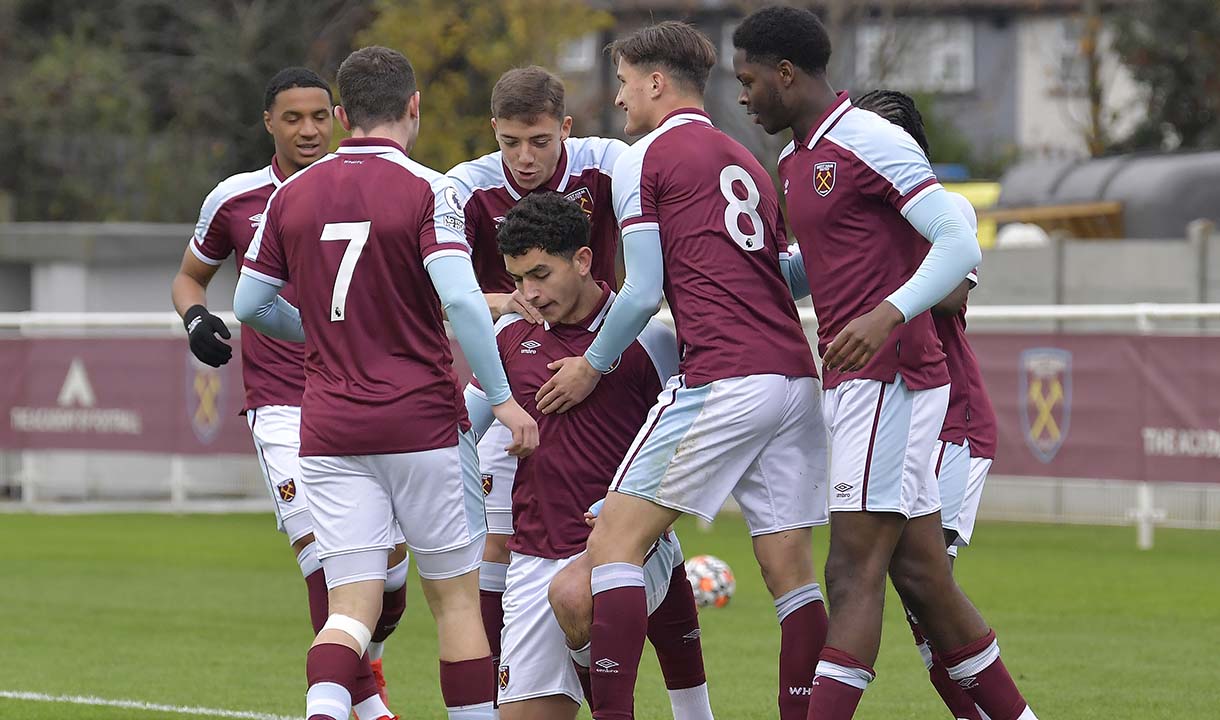 West Ham United U23s return to league action on Sunday with a huge top-of-the-table clash away to Manchester City.

Second-placed West Ham play first-place City on Sunday 20 February at 12pm, with all the action being streamed live on City TV.

Just a couple of weeks ago, West Ham United U23s were top of the table in Premier League 2 Division 1, having started 2022 with an emphatic win over Leeds United and a credible draw away to Arsenal.

Back-to-back league defeats at the hands of Leicester City and Manchester United, however, mean the Irons have only collected one point from their last three league games, allowing Manchester City – this weekend’s opponents – to leapfrog them in the table.

Mark Robson’s side have been impressive throughout most of the 2021/22 campaign so far, seeing off Swansea City in the last game; a Premier League Cup Group F fixture.

With a round of 16 place confirmed, attention now turns back to league football, and a huge test in City away.

The Citizens have played a game more than the Hammers and sit top of the league on 39 points, four points clear of the Irons in second. Sunday’s match will be huge for both teams.

Arsenal have narrowed the game in third, and are now on 32 points, three points behind West Ham, while Tottenham Hotspur are fourth with 29 points.

Manchester City U23s are the reigning, defending champions in Premier League 2 Division 1, and are well in the fight for a second consecutive title.

Coached by Brian Barry-Murphy, who arrived as U23s head coach from Rochdale over the summer, the Citizens have won 12 of their 19 league matches so far this campaign, sit top of the division and are the league’s leading scorers as well.

England U21s international Cole Palmer – who started against West Ham in the Carabao Cup fourth round earlier this year– has been City’s U23s talisman in recent campaigns, famously making an appearance in the Premier League against Burnley in October before going on to score a hat-trick in PL2 on the same evening.

The 19-year-old also bagged a treble against the young Hammers last season, who will be well aware of the dangerous winger’s undoubted talent.

With Palmer spending more and more time with Pep Guardiola’s side, however, City U23s have looked to bed in new talent, and none have performed more consistently that 19-year-old James McAtee. The midfielder has played 18 times this season, scoring 17 goals and providing four assists.

Norwegian Oscar Bobb has also been in excellent form for the U23s, netting six times and providing eight assists in 21 showings.

It was an eagerly anticipated contest when second-placed West Ham United took on third-placed Manchester City at Rush Green Stadium in mid-November, in new lead coach Mark Robson’s first game in charge of the developmental side.

Both West Ham and City had started the season superbly but there was only one goal to separate the two teams last time out, as Sonny Perkins netted after just 90 seconds.

The striker combined well with Kamarai Swyer before unleashing a cool finish from a tight angle to put the Irons in front.

Despite heavy pressure from the visitors, West Ham held on for an outstanding win against the reigning Premier League 2 Division 1 Champions.

You can watch highlights from the victory here!

West Ham United U23s lead coach Mark Robson: “It’s a top-of-the-table clash and it’s a game that, if we can win, it puts us in a really good position for the remainder of the season. But at the same time, Manchester City are probably looking at in the same way.

“It should be a really good game and no doubt they’ll have a really strong team out, so it will be a good test for our boys. We hope we can come out on top.”

West Ham United U23s’ match away to Manchester City U23s will be played at the Academy Stadium on Sunday 20 February 2020, with a 12pm kick-off time.

Tickets to Sunday’s Premier League 2 fixture can be purchased through the host Club, and are available at £3 for adult tickets and £1 for under 23s and over 65s.

Alternatively, fans will be able to watch the action through City TV, who will be live-streaming the fixture.

Updates from the game will be provided through our regular live blog at whufc.com and on Twitter, while reaction and highlights will be available on Sunday afternoon and Monday morning.