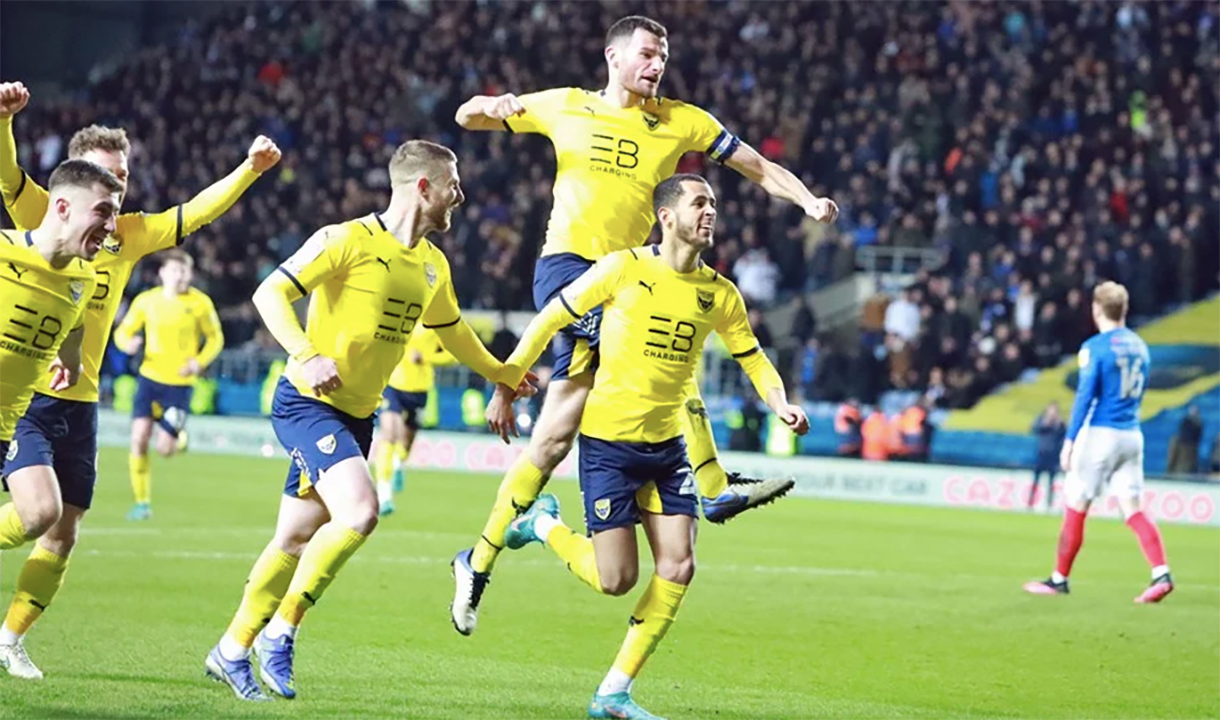 Nathan Holland came off the bench to produce a moment of magic to come up trumps for Oxford United as all three Hammers on loan in EFL League One finished on the winning side.

The 23-year-old winger won the game for the U’s deep into injury time at home to Portsmouth, sending Karl Robinson’s side – and the majority of Kassam Stadium – into delirium.

The two teams had already traded goals inside the opening ten minutes through Oxford’s Luke McNally and Portsmouth’s Michael Jacobs, before the visitors’ Joe Morrell was shown a straight red card on the quarter-of-the-hour mark.

Perhaps predictably thereafter, Oxford laid siege to the Pompey goalmouth, producing 28 shots to the visitors’ three over the course of the afternoon, but they looked set to be frustrated when Ronan Curtis gave Portsmouth the lead shortly after half-time.

On came Holland with 35 minutes remaining to attempt to inspire Oxford, and the nimble winger achieved precisely that, peppering the visitors’ box with shots and several teasing deliveries.

In the end, the winger could even claim the assist for Cameron Brannagan’s 82nd-minute equaliser, squaring the ball for his teammate to curl in a marvellous effort from 30 yards.

Then, in the sixth minute of injury time, Holland’s own moment of inspiration arrived.

Picking the ball up from a throw-in on the left, the winger dribbled round three trailing defenders and, 25 yards out, swung a delightfully dipping effort right the way across the goalkeeper and into the bottom corner, in one fell swoop winning the game for his side.

Both the goal and assist were Holland’s fifth of the season and kept the U’s promotion challenge on course, with Oxford now fifth, just three points off the automatic promotion places.

In a match which also featured two other former Hammers – Anthony Scully played for Lincoln whilst Dan Kemp made his Dons debut off the bench – the Republic of Ireland U21s captain was typically influential.

After Scully’s cross had led to Lincoln taking an early lead through John Marquis, Coventry kickstarted the move which resulted in Harry Darling heading in an equaliser five minutes before half-time.

Warren O’Hara then headed in the Dons’ second moments after the restart to seal a 2-1 win over the Imps, Coventry’s third in four appearances since joining Liam Manning’s side on loan for the rest of the season. MK Dons now sit third, just a point behind Wigan in second.

And Mipo Odubeko also finished on the winning side for Doncaster Rovers, the bottom-of-the-table side springing a major shock by beating Sunderland 2-1 at the Stadium of Light.

Odubeko played 75 minutes of the surprise victory which saw the Donny record just 25 per cent of the possession but, crucially, defend stoutly to see out the win, with the West Ham loanee an ever-willing runner for balls over the top.

As it were, such direct play earned Doncaster a two-goal lead at half-time through Reo Griffiths and Tommy Rowe, rendering Corry Evans’ late strike a mere consolation for Sunderland.

Odubeko twice came close to opening his account in Doncaster colours, but it was his work rate and link-up play which shone through at the Stadium of Light as his side attempt to overhaul a seven-point gap between themselves and the edge of the relegation zone.

In the League of Ireland, goalkeeper Joseph Anang picked up a clean sheet on his St Patrick’s Athletic debut: a 1-0 friendly win at home to Cork City FC in which the 21-year-old admittedly had little to do.

And in Ligue 2, shot-stopper Nathan Trott was on the bench for AS Nancy’s 1-1 draw at home to Caen, a result which keeps Nancy nine points within the relegation zone.