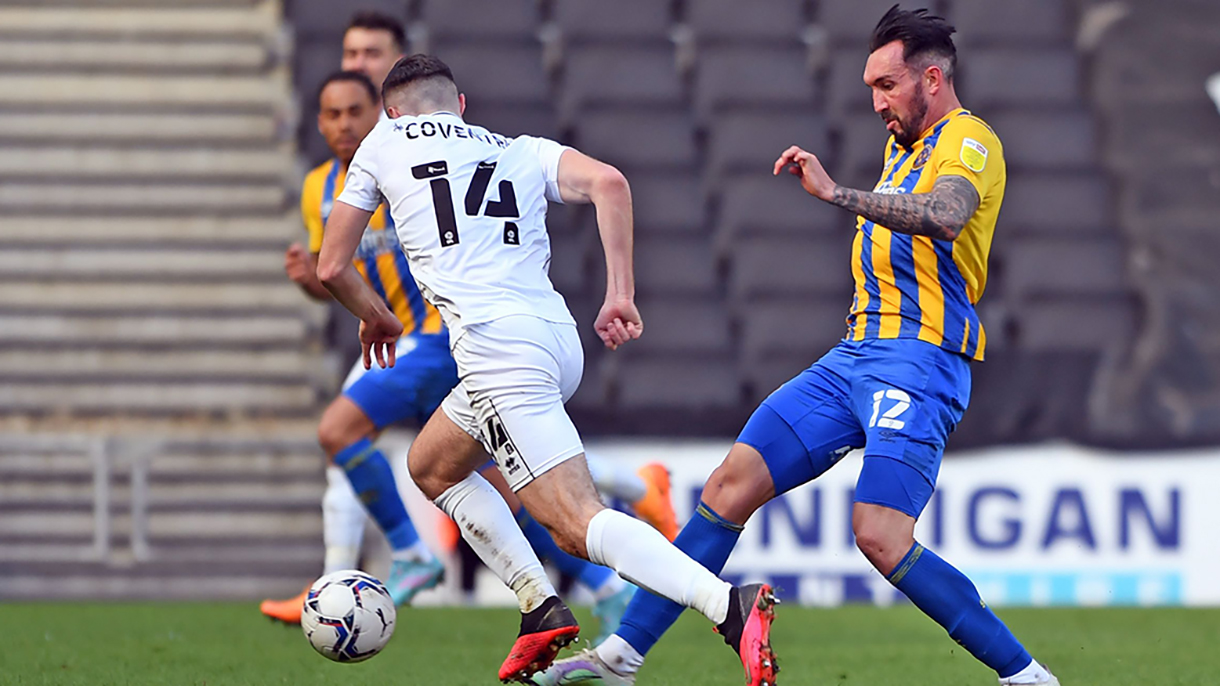 Loan Watch: Another win for Coventry and MK Dons

Conor Coventry and MK Dons’ scintillating form continued on Saturday, with a tenth win in 14 League One matches since his loan switch in January.

The Republic of Ireland U21s’ skipper, buoyed by a brilliant win over Sweden in UEFA Euro U21 qualification during the international break, once again helped the Dons dominate the ball in a 2-0 win over Shrewsbury at Stadium MK.

And Coventry’s incisive distribution from a deep-lying position once again played a key part in unpicking the opposition defence, one particularly clever diagonal pass leading to Daniel Harvie curling an effort against the base of the post.

Shrewsbury did come close to equalising as the half wore on but were undone by a smart finish from Twine early in the second half, with Coventry going close to adding a third late on with a fierce shot beaten away by goalkeeper Marko Maroši.

As it was, Liam Manning’s Dons team moved within a point of top spot in the League One table with their victory; Rotherham United and Wigan Athletic have both won a point more, with the Millers having played one game fewer and the Latics two.

Next up for MK Dons is a home game against Crewe Alexandra on Tuesday.

Slightly falling off the promotion push pace in recent weeks have been Oxford United, for whom Nathan Holland was a late substitute in a 1-0 defeat at Plymouth Argyle.

The 23-year-old West Ham loanee played the final eleven minutes of the defeat at Home Park, inflicted upon the U’s by a Joe Edwards effort early in the second half.

Holland had little time to produce his customary magic as defeat took Oxford outside of the Play-Offs spots by the margin of a single point, but will hope to reclaim his place in the team for the away trip to struggling Morecambe on Tuesday.

Mipo Odubeko was also a late substitute for Doncaster Rovers on Saturday, who suffered a 2-0 defeat at Wycombe Wanderers – and now sit eight points from safety with five games remaining.

Coming on a single goal down, the recent Republic of Ireland U21s debutant came on for the final 20 minutes and helped apply pressure to the Wycombe goalmouth at Adams Park, but saw his side unpicked on the counter-attack late on.

Doncaster will need to get points on the board when they host Crewe Alexandra at Keepmoat on Tuesday night.

In the League of Ireland Premier Division, goalkeeper Joseph Anang and St Patrick’s Athletic returned to their domestic duties with a 1-1 draw at home to mid-table Drogheda United.

The ‘stopper had little chance with the game’s opening goal after 17 minutes, a sliced clearance playing Dayle Rooney through to round the West Ham loanee goalkeeper.

And having pressed for an equaliser for the remainder of the game, Darragh Burns’ flick 13 minutes from time drew the Saints level – yet despite dominating, they were forced to settle for a point, slipping seven behind early league leaders Derry City.

Elsewhere, goalkeeper Nathan Trott was an unused substitute for AS Nancy in their 2-0 home defeat to title-chasing Ajaccio on Monday evening.

Bottom-of-the-table Nancy now require at least eleven points – if not, realistically, more – from their final seven games to avoid relegation from Ligue 2.