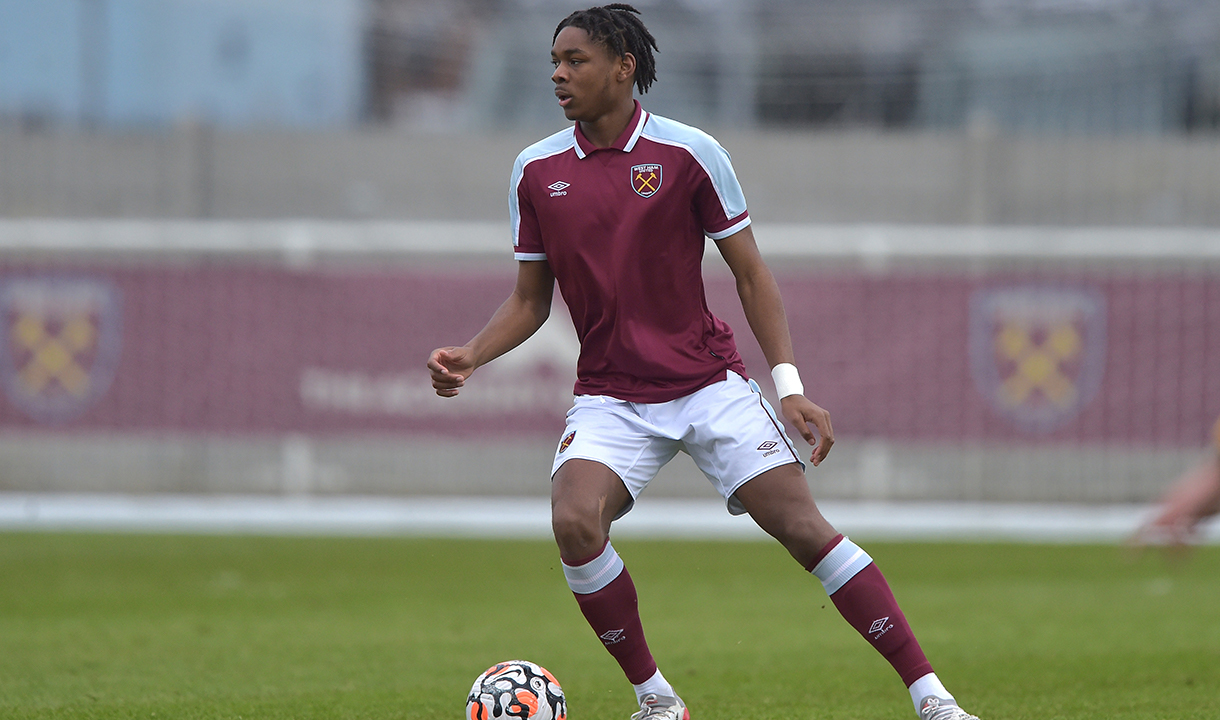 At the culmination of an outstanding first half to their season, West Ham United U23s will hope to finish for their winter break in style when they travel to Liverpool U23s on Sunday afternoon.

Holding a four-point lead over nearest challengers Tottenham Hotspur, West Ham’s development squad are guaranteed to sit top of the Premier League 2 table at the turn of the year, but will be hoping to maintain that cushion with a trip to Merseyside.

The game – which will be played behind closed doors at the Liverpool Academy training ground – kicks off at 2pm on Sunday 19 December, and here’s everything you need to know about it…

The 2021/22 numbers, so far, make for exciting reading for Hammers supporters.

West Ham’s U23s have played 21 competitive games since the start of the season. They have won 14 of them, scoring some 48 times.

Those 14 wins encompass ten in Premier League 2, in which Mark Robson’s development squad hold a four-point advantage over Tottenham in second; five over Arsenal in third; and seven over reigning champions Manchester City in fourth.

There remains a lot of football to be played, but the young Hammers have earned, the right way, their plaudits and – in recent weeks – their raft of first-team debuts and opportunities under manager David Moyes.

With all Academy football set to enter its pre-planned festive break after this weekend, the young Hammers have one final fixture to fulfil to round off a 2021 in which they have sparkled: away at Liverpool U23s on Sunday afternoon.

Robson’s team go into the game, however, having failed to win at home for the first time this season, playing out an admittedly drab 0-0 draw with Wolverhampton Wanderers U23s on Monday which saw them miss the chance to go top of Group F in the Premier League Cup.

They remain on course to qualify from the group stages of that competition, but having got accustomed to that winning feeling in recent weeks, Robson’s youngsters will want to put an impressive display to – as the lead coach surmised neatly after Monday – maintain, and build upon, the standards which have helped them progress so far this season.

Standing in their way on Merseyside are a Liverpool U23s team which have also won opportunities for a number of its regulars, but have struggled to establish consistent form in Premier League 2 this season.

They have been managed since the summer of 2020 by former Wigan Athletic and Bolton Wanderers academy coach Barry Lewtas, who joined the Reds in 2013, lifted the FA Youth Cup with their U18s in 2018/19 and stepped up to the U23s role following Neil Critchley’s departure to Blackpool.

Liverpool U23s have bounced back from a run of four successive defeats in the autumn to win three of their last seven games, including a thumping 3-0 win over title challengers Arsenal on Merseyside two months ago.

In that run, however, lie defeats by the same scoreline to Brighton & Hove Albion, Crystal Palace and – just last month – West Ham, summing up the inconsistent nature of the performances which have led to them sitting tenth in the table.

All-action midfielder Tyler Morton, 19-years-old from nearby Wallasey, recently made the headlines after enjoying a full Liverpool debut in the UEFA Champions League win over Porto, with other products including rampaging left-back Owen Beck; midfielders Kaide Gordon and Elijah Dixon-Bonner; and forwards Max Woltman and Harvey Blair all stepping up to the first-team picture this season.

Woltman, Dixon-Bonner and midfielder Mateusz Musialowski are Liverpool’s top scorers in Premier League 2 so far this season with three goals apiece, but in general, their current U23s crop is on the more youthful – and therefore understandably – inconsistent side.

Robson will therefore be in no doubt that West Ham must assert their dominance on the contest and not allow Liverpool to show their real promise.

Sonny Perkins’ deadly double and a Thierry Nevers strike – in what proved Dmitri Halajko’s last game in charge before moving to the Premier League – were enough to cap an impressive display of finishing and general control.

Last time out at the Liverpool Academy in March, the two teams played out an entertaining 1-1 draw, Kai Corbett’s deflected effort for West Ham cancelled out by Liverpool right-back Conor Bradley’s low drive.

Since the formation of the Professional Development League, the Academy of Football have won five of 13 games against Liverpool U23s, drawing two and losing six.

They are, however, unbeaten in their last three away games on Merseyside, winning there twice in 2018.

"The boys are really disappointed after the 0-0 draw with Wolves and that’s good, because I think they realise we’re miles better than what we showed. That’s a good sign.

"It’s the last game before Christmas so it’d be nice to go to Liverpool and get three points, but more importantly to get a performance that we can talk about happily."

You can still follow proceedings, however, with our live blog on whufc.com from 1.30pm and Twitter updates, and there will be post-match reaction and highlights pieces available over Sunday afternoon and Monday morning.