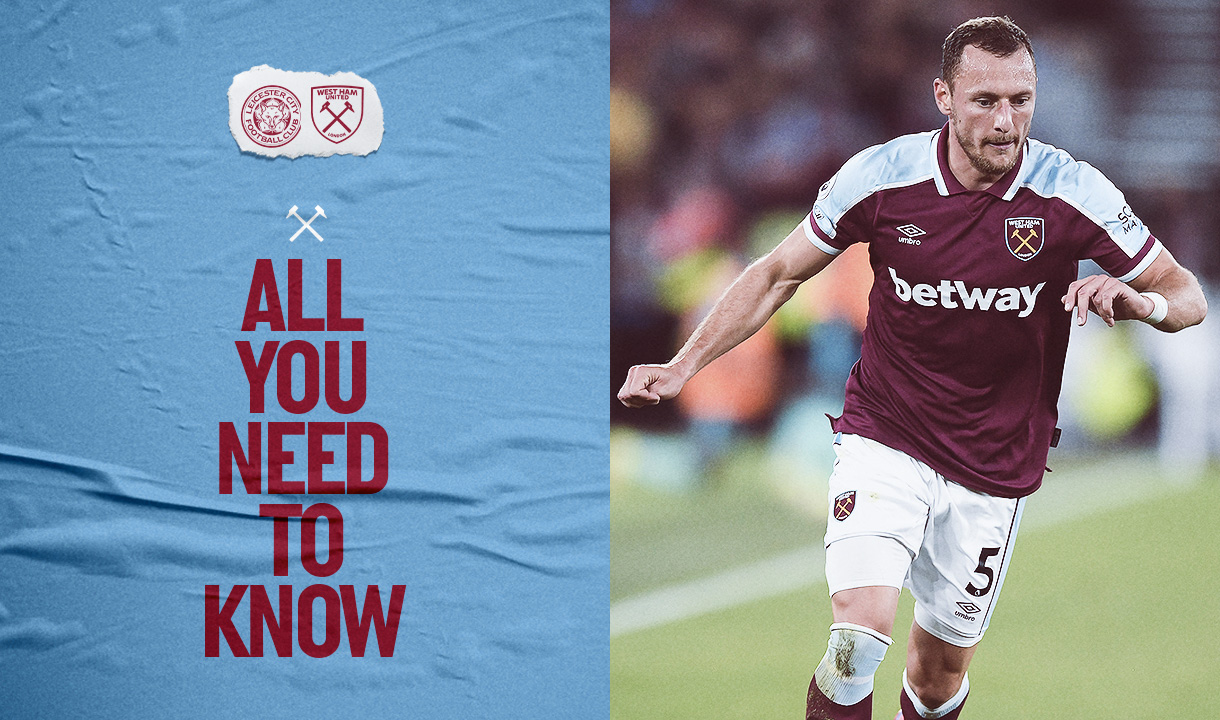 The Hammers head to the East Midlands seeking to build on a 1-0 home win over Watford on Tuesday evening - a result that ended a two-game losing streak and saw David Moyes' side climb back into the top four. We kick-off the weekend with 40 points from 24 matches played.

While the teams immediately below West Ham have games in-hand due to COVID issues earlier in the season, a victory at King Power Stadium would mean the Irons keep up the pressure on the likes of Arsenal, Manchester United and Tottenham Hotspur.

You would expect Leicester to be in that list of clubs challenging for a top-six finish too, but the Foxes have endured a frustrating season thus far. After a Thursday evening defeat at Liverpool, Brendan Rodgers' side go into the weekend with 26 points from 21 games played, so wins in their games in-hand on the teams above them could yet see Leicester close the gap on the top six or seven.

Sky Sports have selected this match as their Super Sunday offering, which means kick-off at King Power Stadium is at 4.30pm and the game will be broadcast live in the UK by Sky Sports Main Event, Sky Sports Premier League and Sky Ultra HD.

Whether you're part of the Claret and Blue Army at Leicester or watching from home, a bar, with friends or family, enjoy the game!

Seats for our Premier League home game with Newcastle United are available on the Ticket Exchange, while tickets are on General Sale for the London Stadium fixtures with Wolverhampton Wanderers and Aston Villa, while Season Ticket Holders and Bondholders can buy tickets and additional seats for our UEFA Europa League round of 16 home leg on Thursday 17 March.

Leicester City have published COVID-19 guidance for fans attending Sunday's match at King Power Stadium, which you can read here.

Summarised, Leicester tell fans that following the UK Government’s easing of COVID-19 restrictions across the country, supporters attending Premier League fixtures will no longer need to present a COVID Pass as a condition of entry.

Despite the easing of restrictions, it remains important that everyone attending Leicester City fixtures follows the latest public health guidance to help prevent the spread of COVID-19 and are encouraged to continue to wear face coverings while indoors or in crowded areas.

There remains a number of straightforward ways to keep as safe as possible on a matchday, including:

Meanwhile, you can read our Over Land and Sea guide to our trip to Leicester here!

Sunday's 4.30pm kick-off will be broadcast live in the UK by Sky Sports Main Event, Sky Sports Premier League and Sky Ultra HD. If you are based overseas, you may be able to watch the game in your territory. Click here for overseas broadcast listings.

West Ham United manager David Moyes will definitely be without Angelo Ogbonna, who is recovering from a knee ligament injury. Wing-back Arthur Masuaku missed Tuesday's win over Watford with a knee issue.

Premier League champions in 2016, UEFA Champions League quarter-finalists in 2017, current FA Cup and FA Community Shield holders and fifth-place finishers in each of the previous two seasons, Leicester City have become one of English football's leading lights over the past decade.

Well-run and hugely popular in their one-club city, Leicester have broken through the established 'big six' - something West Ham United are trying to do - and are now widely considered to be a force not just domestically, but continentally.

A show of Leicester's strength on and off the pitch came when their Thai owner and Chairman Vichai Srivaddhanaprabha passed away suddenly in October 2018, when a helicopter carrying him crashed seconds after leaving King Power Stadium following a Premier League fixture with West Ham.

That tragedy could have torn some clubs apart, but instead it drew Leicester closer together, while the outpouring of love and support from across the football world was widespread and sincere.

Three-and-a-half years on, Leicester remain a model club that so many others would do well to follow, with a passionate fanbase, an experienced manager, innovative leadership and a strong squad.

Which is perhaps why the Foxes' current relative struggles are such a surprise.

Leicester have been wildly inconsistent this season, winning seven and losing nine of their 21 Premier League fixtures, being knocked out of the EFL Cup, UEFA Europa League and FA Cup and seemingly out of the race for European qualification.

The loss of important players to injury has not helped but, even so, Leicester's results have been something of a shock.

There is still time for things to turn around and Leicester are still in the UEFA Conference League and could yet challenge for a top-six Premier League finish, but it will need to happen sooner rather than later.

And the Hammers made it three wins in succession over the Foxes with a thumping 4-1 success in east London in our first home game of the current campaign back in August last year.

Overall, the two clubs have met 29 times in the Premier League, with West Ham holding the edge with 14 wins to nine, with six draws.

As he continues his final season on home turf as a West Ham player, Club captain Mark Noble has faced Leicester 16 times as a West Ham player – eleven in the Premier League, four in the Championship and once in the EFL Cup. Noble has scored two goals in those fixtures, including a memorable volley to secure a 2-0 win at King Power Stadium that kept the Irons in the Premier League in May 2018 (pictured, above). He was also sent-off in a 1-1 draw at the same venue in November of the same year.

He has refereed West Ham United on 32 occasions, including the penultimate game at the Boleyn Ground against Swansea City in May 2016, and most-recently the 4-1 Premier League home win over Leicester City in August last year and the 2-1 defeat at Manchester City in late November.