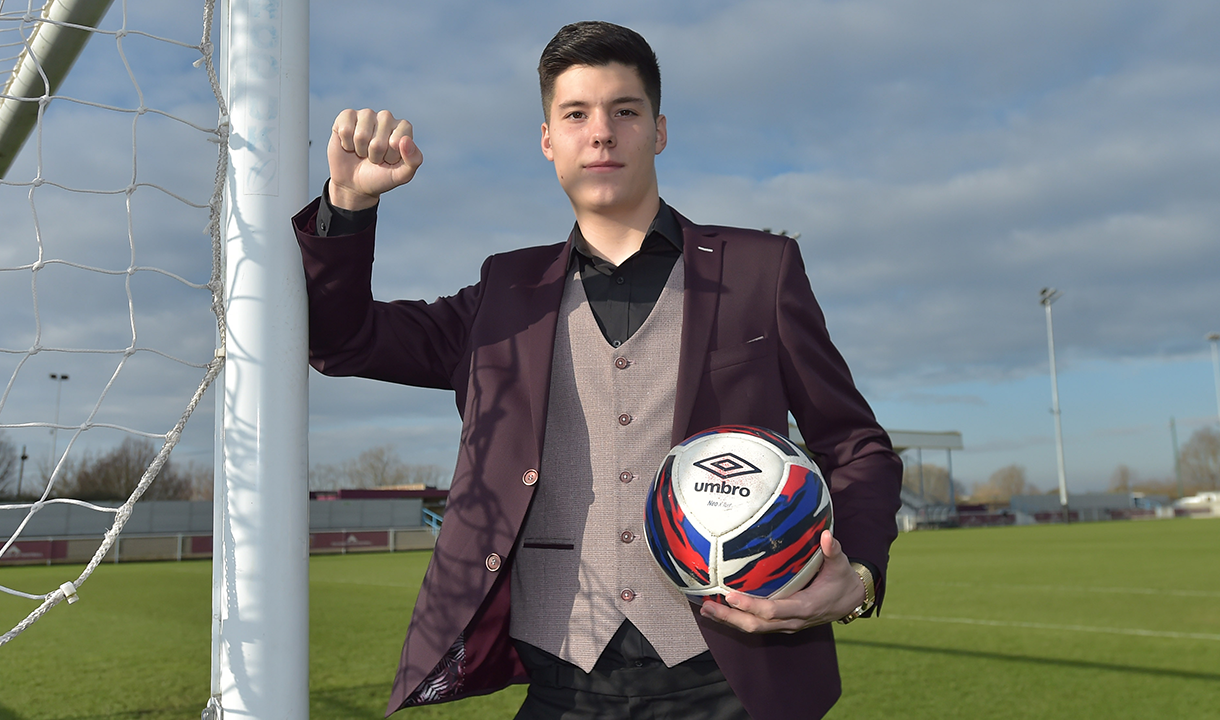 Krisztián Hegyi hopes to make even more memories at West Ham United after penning a new contract at the Club.

Hegyi signed a new three-year deal with West Ham in January, extending his stay with the Hammers until 2025.

The Hungary U21 national team goalkeeper has been with West Ham since 2019 and, while admitting life in England was an adjustment, has loved his time in east London over the last couple of years.

“I’ve really enjoyed my time here so far,” Hegyi told West Ham TV. “It’s been a good two-and-a-half years so far. Obviously, we’ve had the COVID-19 Pandemic and there was a time when we stopped training but, aside from that, it’s been really good and I’ve enjoyed it.

“It wasn’t that easy to get used to England at the start, to be honest. I didn’t speak English at the start so I had to learn the language, so it was a bit hard at the start. But as time has gone on I’ve really enjoyed myself here.

“Obviously now I play for the U23s which is a big step up from last year, when I was with the U18s. I’m really happy with that step up and with my time here so far.”

The 19-year-old has been plying his trade as a goalkeeper for a little over a decade, having first stepped between the sticks at the insistence of his youth team coach at eight-years-old.

Having also played handball as a child, Hegyi was well equipped for the challenge.

He recalled: “When I was eight-years-old, I played both handball and football, so obviously I wasn’t scared to catch the ball because I was playing handball as well.

“One of my best mates was the goalkeeper for our football team, but he got injured and the football coach knew I wasn’t scared of the ball. He just told me that I had to bring gloves with me for the next training session.

“I went in goal and, in that first tournament we took part in, I won the ‘best goalkeeper’ award. After that, I couldn’t get out!

“It’s a funny story because my mother didn’t want me to be a goalkeeper, but my coach really wanted me to stay in goal. They were fighting over whether to keep me in goal, but my coach won! I think I’m happy that he won.

“You do have to be a bit crazy to be a goalkeeper, but you also have to work hard, and I think what I enjoy the most is when I’m able to make a good save and help the team out. We’re doing really well this season and hopefully we can continue on this path.”

You do have to be a bit crazy to be a goalkeeper, but you also have to work hard

Hegyi’s progression through the West Ham ranks has seen the shot-stopper step up from the U18s into the U23s, while also regularly working with the first team.

The youngster was invited by first team goalkeeping coach Xavi Valero to train with the senior side during the pre-season trip to Scotland and has also worked with the likes of Lukasz Fabianski, Alphonse Areola and Darren Randolph at Rush Green.

Hegyi knows those sessions, and the teachings from Valero, are essential for his own development.

“I’ve learned a lot from Xavi,” he added. “He’s taught me a lot of things, like how to see the game differently from the goal. He has helped me a lot. Billy Levine has also helped me a lot, so I’m really grateful to them.

“Xavi has given me a lot of advice, such as staying solid and not doing silly things in goal. That means then that your teammates and your coaches can trust you. He’s also taught me a lot of things about positioning and timing, and how to be in the right position and being ahead of the game. I think those things are very important for any goalkeeper.

“I think working with the experienced goalkeepers has also been a massive help for me. Training with them is always a good time and I learn a lot from each of them. I love to watch how they train and what they do. That’s very helpful for me.”