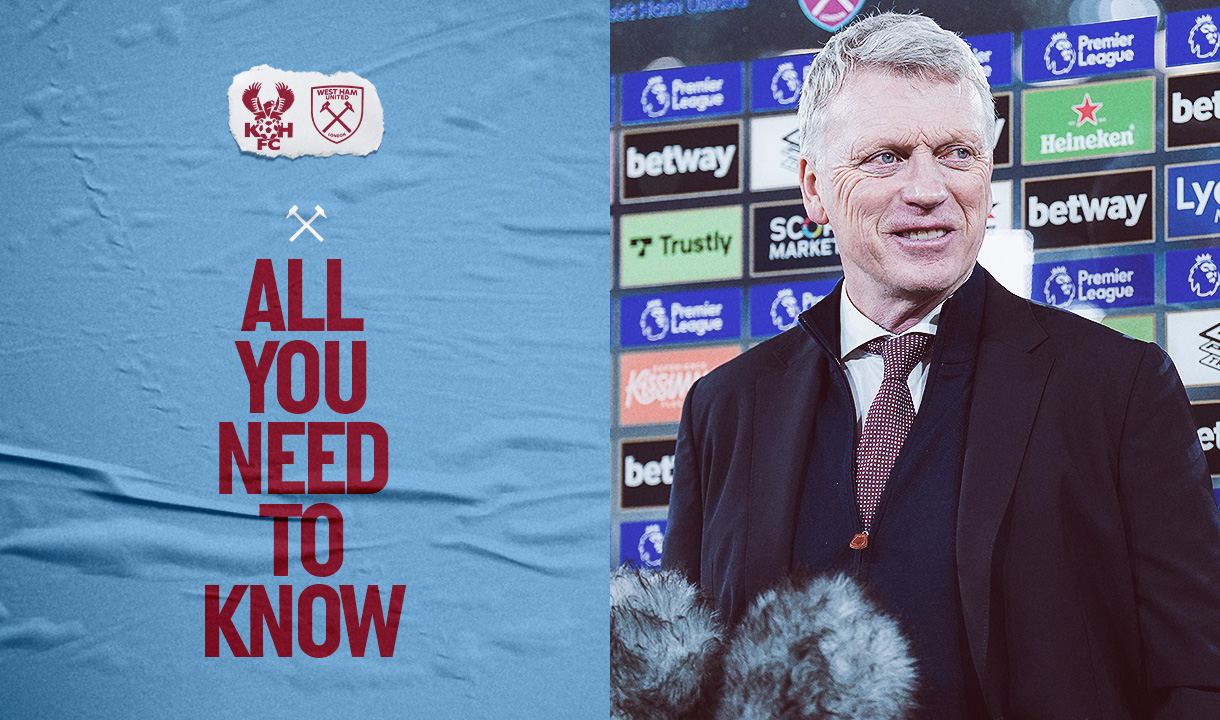 West Ham United travel to Kidderminster Harriers for just the second time in the Club's history for an Emirates FA Cup fifth round tie this weekend.

The BBC cameras will also be in the Worcestershire town, no doubt hoping for an upset, as the Premier League Hammers take on their National League North hosts in a Saturday 12.30pm kick-off. There will also be a 6,444-strong crowd present at Aggborough Stadium, with the vast majority eyeing a home win.

Kidderminster have enjoyed an outstanding FA Cup run which began in the second qualifying round back on 18 September 2021. Kiddy have beaten Sporting Khalsa, Ware, Bedfont Sports, National League Premier opponents Grimsby Town and FC Halifax Town and EFL Championship side Reading (pictured) to reach the fourth round proper.

Saturday's tie marks the second season in succession that David Moyes' side have faced non-league opposition in the FA Cup, as Craig Dawson's header took them past National League outfit Stockport County in the third round in January 2021.

It is also the second time West Ham have been drawn to face Kidderminster in the FA Cup, as Lee Chapman's header saw Billy Bonds' side edge past Harriers in the fifth round in February 1994 - the only time Kiddy have gone that far in the competition, and the hosts will hope to shock West Ham and emulate that feat this time around.

Moyes, who was part of the Preston North End team beaten by Kidderminster in the fourth round back in 1994, will of course hope his West Ham side can safely avoid their banana skin and make it safely through to the last 16.

You can watch a West Ham TV feature focusing on that tie 28 years ago by clicking here.

If you are travelling up to Kidderminster, check out our guide for travelling fans here.

However, tickets are on General Sale for the home Premier League ties with Watford on Tuesday 8 February, Newcastle United on Saturday 19 February and Wolverhampton Wanderers on Sunday 27 February. Secure your seats now for those games now by clicking here.

Season Ticket Holders and Bondholders can also secure their seats for the UEFA Europa League round of 16 second leg at London Stadium, which will be played on Thursday 17 March.

For information about the COVID guidelines in place at Aggborough Stadium, click here.

Saturday's 12.30pm kick-off will be broadcast live in the UK by BBC One, BBC iPlayer and the BBC Sport website from 12noon. If you are based overseas, you may be able to watch the game in your territory. Click here for overseas broadcast listings.

David Moyes will be without Angelo Ogbonna (knee), while Michail Antonio is also set to be unavailable after only playing in a FIFA World Cup qualifier for Jamaica in the early hours of Thursday morning. Jamaica were beaten 1-0 at home by Costa Rica to end their hopes of reaching Qatar 2022.

Saïd Benrahma is available again after representing Algeria at the CAF Africa Cup of Nations in Cameroon.

A number of young professionals have been training with the first-team squad this week and could be included in Moyes' matchday squad.

In the event the scores are level after 90 minutes the match will go into extra-time and if the scores still remain level then the match will be decided on penalties. Neither VAR and Goal line technology will be in operation for this fixture.

Each manager can name nine substitutes, of which five can be used (different from Premier League). Managers have three occasions during open play to make substitutions (excluding half-time) – multiple substitutions can be made during each occasion. An additional (fourth) opportunity to make a substitution is provided if the match goes into extra-time (excluding the break between full-time and extra-time and half-time during extra-time).

Each Club shall also be permitted to utilise up to two ‘concussion substitutes’ and/or two ‘additional substitutes’ (as appropriate) from those substitutes listed on the Team Sheet.

Founded in 1886, Kidderminster Harriers hail from the Worcestershire town made famous by its textiles industry - hence one of the club's nickname of The Carpetmen.

Kidderminster won the FA Trophy in 1987, defeating Burton Albion in the final, before winning the Conference in 1994, only to be denied promotion to the Football League due to the condition of their Aggborough Stadium. The same year, they had beaten a Preston team  (pictured) including David Moyes on their way to the FA Cup fourth round, where they were edged out 1-0 at home by West Ham United in front of a capacity 8,000 crowd.

Kiddy won the title again in 2000 under former Liverpool midfielder Jan Mølby and were promoted to the Football League for the first time. The remained there for five seasons before being relegated into the non-league again in 2005.

Kidderminster were relegated to National League North in 2016, and have remained there ever since.

This season, however, under manager Russell Penn, not only have the Carpetmen excelled in the FA Cup, but they are also third in the table, just four points behind leaders Gateshead with 19 games still to play.

As mentioned, West Ham United have visited Aggborough Stadium just once previously for a competitive fixture.

You can watch a West Ham TV feature focusing on that tie 28 years ago by clicking here.

West Ham would go on to lose to Luton in a sixth round replay at Kenilworth Road, while Kidderminster would win the Conference title, but be denied promotion due to the state of their home ground.

Born in Sunderland in 1970, Jon Moss won a football scholarship at Central Connecticut State University in the United States but completed his studies with a degree in teaching and physical education at the University of Leeds.

The 51-year-old has refereed West Ham United 32 times in total since a 2-1 Championship defeat at Derby County on New Year’s Eve 2011.

He was in charge for the Hammers' 1-0 Carabao Cup third-round win at Manchester United in September 2021, and our most-recent Premier League fixture, a 1-0 defeat by the Red Devils at Old Trafford a fortnight ago.

As an aside, Moss famously runs a record shop in Leeds called... Vinyl Whistle!