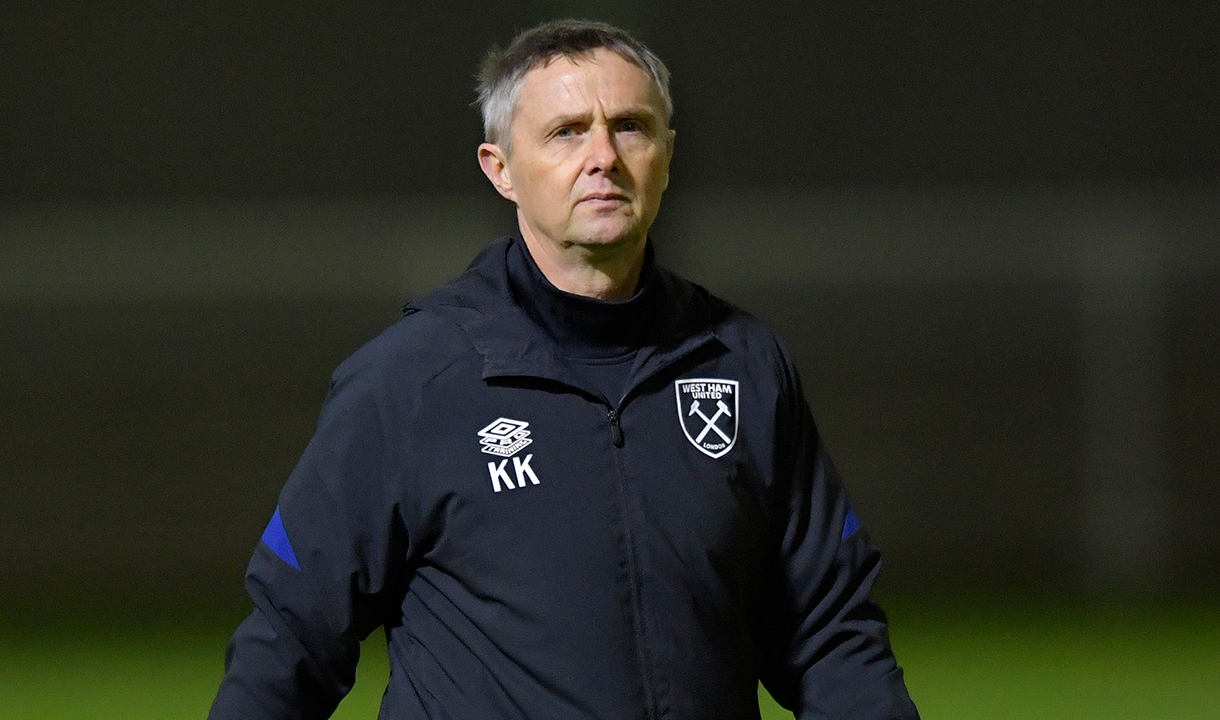 West Ham United U18s will attack the second half of their 2021/22 season confident that they can make an impact on the upper echelons of the U18 Premier League South table, according to Kevin Keen.

The U18s lead coach feels that, at just under the halfway mark of the campaign, his squad possesses all the elements required to serve as title challengers – and has called on his young charges to prove him right…

Kevin, at just under the halfway stage of 2021/22, what’s been your assessment of the campaign so far?

I’ve got a really tight group of young players and staff. Everybody’s together, with a real West Ham mentality, and I think we’ve had a good start to the season.

We’re playing a couple of 16-year-olds each week, which I don’t think many other youth teams have been doing. We’re a good squad, very much together. However, the crucial games in the U17 Premier League Cup, the U18 Premier League Cup and the Youth Cup, have been lost, so that’s something we need to look into a little bit.

It’s going to sound a bit strange, but my half-term report was that, other than that, I think we’ve done well and played some fantastic football, scoring good goals. However, when it’s been those bigger games and tight moments, we’ve come up a little bit short.

Maybe that’s down to the inexperience of the squad a little bit, but it’s something we need to make sure we get right between now and the end of the season.

We’ve set the goal of trying to finish in the top three of the league. With the way that we've been playing, seven league games unbeaten and having won our last four, I think that’s a realistic target for this young squad. I’d like to think we can get somewhere close to that.

What have been the standout results or performances of the season so far?

In youth football terms, Chelsea are very much one of the top teams in the Southern part of the league. They have fantastic, athletic players, and spend a lot of money on their squad. To go to them and win 2-1 was a fantastic result.

I would also highlight the Norwich game, our last game before Christmas, even though it was only 2-0. It came the week after the Youth Cup defeat and the lads put that behind them and showed resilience.

I wouldn’t say football-wise it was our best performance, but in terms of the mentality – the grit and determination to get through their disappointment, get a clean sheet and win 2-0 away from home – that stands out as well.

Sonny Perkins began the season as an U18s player, and made his first-team debut just over three months later…

I don’t think there are many teams in the Premier League where you’ll get that kind of progression, that quickly.

When you reflect on those four or five months before Christmas, you have to talk about all those players making debuts in the UEFA Europa League [against Dinamo Zagreb]. It was just a standout moment, and I’m really proud for Ricky Martin and the Academy. And to have a couple of U18s make full debuts in the Europa League…

Full credit to Sonny. His progression was very quick. Obviously, there can be a little bit of luck within that – the first team were maybe short a little bit up front then – but at the same time, as a player and a young man, you have to grab that opportunity. Sonny’s done that.

I’m not sure he’ll play for the youth team between now and the end of the season. He’s welcome to come and play for us, but I’m not sure we’re going to see him!

It sums up West Ham United as a Football Club. It’s been like it ever since I’ve known it.

For an U18s player, that could be jumping up to the U23s, or even up to the first team. It’s why a lot of young players want to come here: because they know they’ll be given an opportunity if they’re good enough.

It was recently confirmed that a former teammate of yours, Kenny Brown, had joined the Academy. How important is that connection to the Club through yourself, Mark Robson, Steve Potts, and so many other former players, coaching the next generation of Hammers?

When I was 14 or 15 and having to make my decision as to where to come, the fact that it was such a family club and had that feel was a massive motivation for me.

To have Kenny back, joining with myself and Robbo and players from past teams, is brilliant, because everyone here wants to work the West Ham Way.