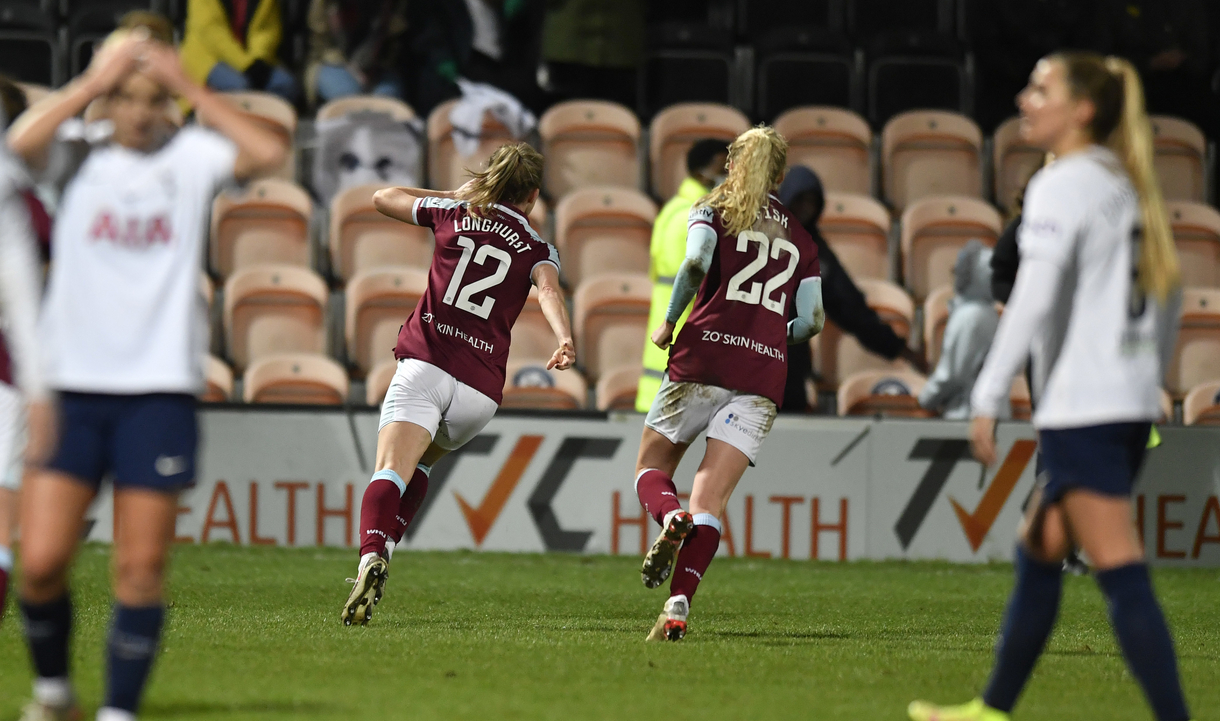 Kate Longhurst is relishing living the dream of every West Ham United fan after netting a late equaliser against Tottenham Hotspur.

The lifelong Hammer looped in a superb header from Dagný Brynjarsdóttir’s cross in the second minute of added time at the end of a highly competitive Barclays FA Women’s Super League match with Spurs on Sunday, securing the Irons a share of the points.

Tottenham had taken the lead in the contest in the second half, thanks to Rosella Ayane’s penalty, while Hawa Cissoko’s dismissal following a second yellow card had given Olli Harder’s team a difficult task.

Having dug in deep, defended resolutely, and seen out several spells of Spurs pressure, Longhurst was thrilled to play such a pivotal role in ensuring West Ham left The Hive with something to show for their efforts.

As a West Ham fan, that’s what you want. You want to score against Tottenham!

Longhurst said: “I actually think that’s my first goal in the WSL since my debut for West Ham, which is a few years ago now. I’ve just connected well and– as a West Ham fan – that’s what you want. You want to score against Tottenham. And that’s what I managed to do!

“I just wanted Dagny to get the ball in the box and, when it came to me, I just wanted to get something on it. Thankfully I connected with it enough but, as I headed it, I wasn’t sure if it was going to go over. I couldn’t tell where the ball was going, so once it went in, it was amazing.”

The experienced midfielder admitted losing Cissoko and going down to ten players affected the away side but, while West Ham had hoped to claim three points, Longhurst says the team was content to take a point after their injury-time leveller.

She continued: “I think in terms of our performance, we dug deep and we did what we had to do. Obviously, it didn't help going down to ten and we just knew that we just had to keep defending and, if we can get one chance, we take it.

“So, obviously for me to score it… of course everyone would always say you'd rather have three points. But when you hear the injury time and you manage to get an equaliser, it was a great feeling which you could probably see from me running half the length of the pitch!”

Longhurst was also keen to heap praise on Lucy Parker, who  played a pivotal role following her introduction from the bench in the second half.

Parker made a goal-line clearance from Ashley Neville’s effort and injected new blood into the defensive line, something the No12 credits as being a huge boost for the side.

“She gave us that bit of energy when she came on. She gave us real energy in the defence area and the clearance off the line, it was a key moment and allowed us to get something from the game.”

Longhurst’s late leveller means West Ham have taken four points from six against Spurs this season, something she feels shows the team’s progression in recent months.

She added: “We’ve struggled against Tottenham in this league so it’s nice to be unbeaten against them this season. It’s not always a pretty game and, in both of the games, I actually think it’s been some of the worst football we’ve played this season.

But we got four points from the two games and we can’t complain about that.”