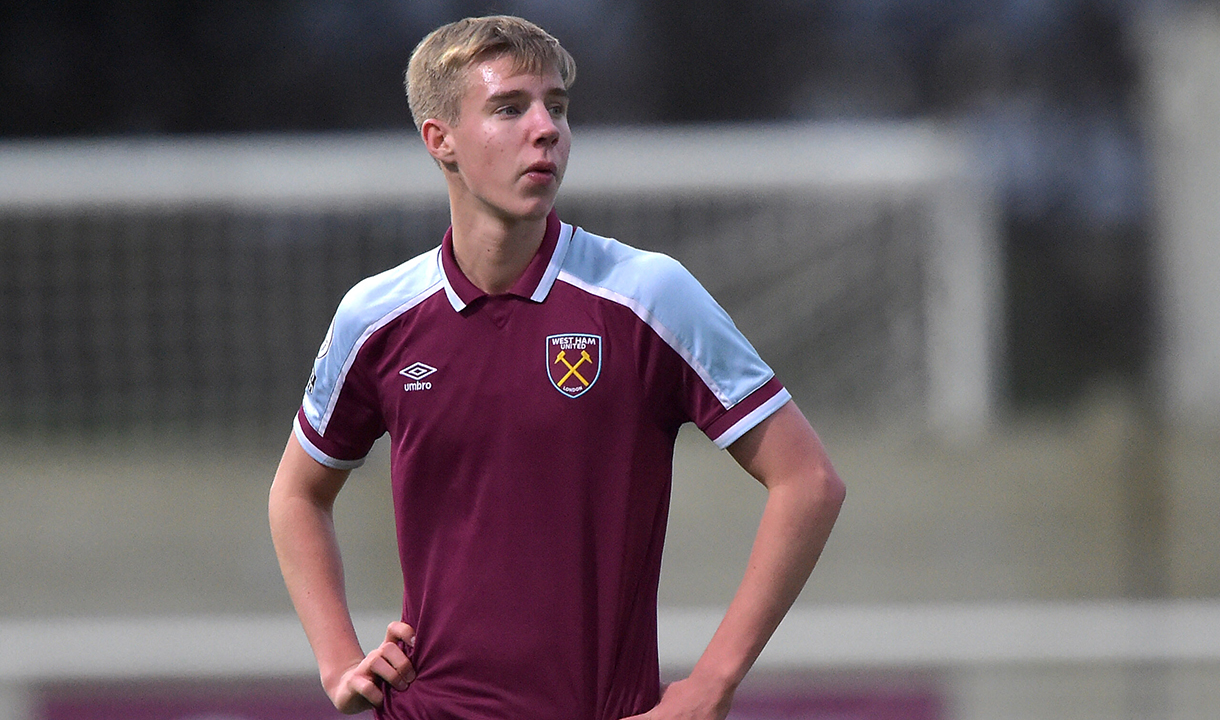 Kaelan Casey: I was glad for my West Ham United U23s opportunity

Academy of Football debuts have not just been limited to the first team in recent weeks, as centre-back Kaelan Casey became the latest of the current U18s to make their West Ham United U23s debut on Monday afternoon.

The 17-year-old centre-back came on for the final 25 minutes of the development squad’s 0-0 draw with Wolverhampton Wanderers U23s in the Premier League Cup.

The defender demonstrated little hesitancy in throwing himself straight into the challenge, putting in an excellent tackle five minutes after coming on to deny Nathan Fraser on the turn inside the box, in turn earning the praise of U23s lead coach Mark Robson on the sidelines.

Casey’s composed defending helped his side keep hold of their clean sheet and earn a point to solidify second place in Group F, and the 17-year-old reflected at full-time on a successful first outing at U23s level.

“It’s been coming,” the centre-back smiled, speaking to whufc.com. “I’ve been on the bench a few times but I was glad I got the opportunity today.

“I was really keen when I came on. I just want to keep on playing at this level. It was a good run out for me and although it wasn’t a great result for us overall, it was fine.

“Wolves were a good side. They defended quite well and, for us, we just couldn’t find the back of the net in the end.”

Casey admitted that his defensive instincts kicked in when he saw Fraser turn inside the box with 20 minutes remaining, and stuck to his task diligently.

The imposing defender also felt he learned some valuable lessons from the experience.

He explained: “I just thought I needed to put my body in the way at that moment, and hopefully it would get cleared away, which it did!

“The intensity is a lot higher at U23s level – the speed of the game is quicker. Really, it’s just about being aware of other players and what’s around you.

“Now we’ve just got to focus on the next few games and keep playing like we know we can.”

Casey’s second appearance at Rush Green Stadium in the space of a week arrived shortly after the disappointment on an FA Youth Cup third-round exit to Newcastle United U18s on Friday.

I’d like to try and play U23s football more regularly if I can, and get higher up the table in the U18s league

The centre-back, however, feels his side’s display on that occasion did not reflect their true ability, and now hopes to help his teammates in their quest to push up the U18 Premier League South table – as well as bolster his hopes of more U23s appearances in the future.

“We were unfortunate on Friday in the FA Youth Cup,” he admitted.

“To be honest, we should’ve played better really, but we’ve got to pick our heads up and go again. There are lessons we can learn from it.

“It’s been a good season for me. In the U18s, we’ve been quite consistent with our performances – there was just one game really where the result was off. We’re just trying to get results and climb the table.

“I’d like to try and play U23s football more regularly if I can, and get higher up the table in the U18s league.”