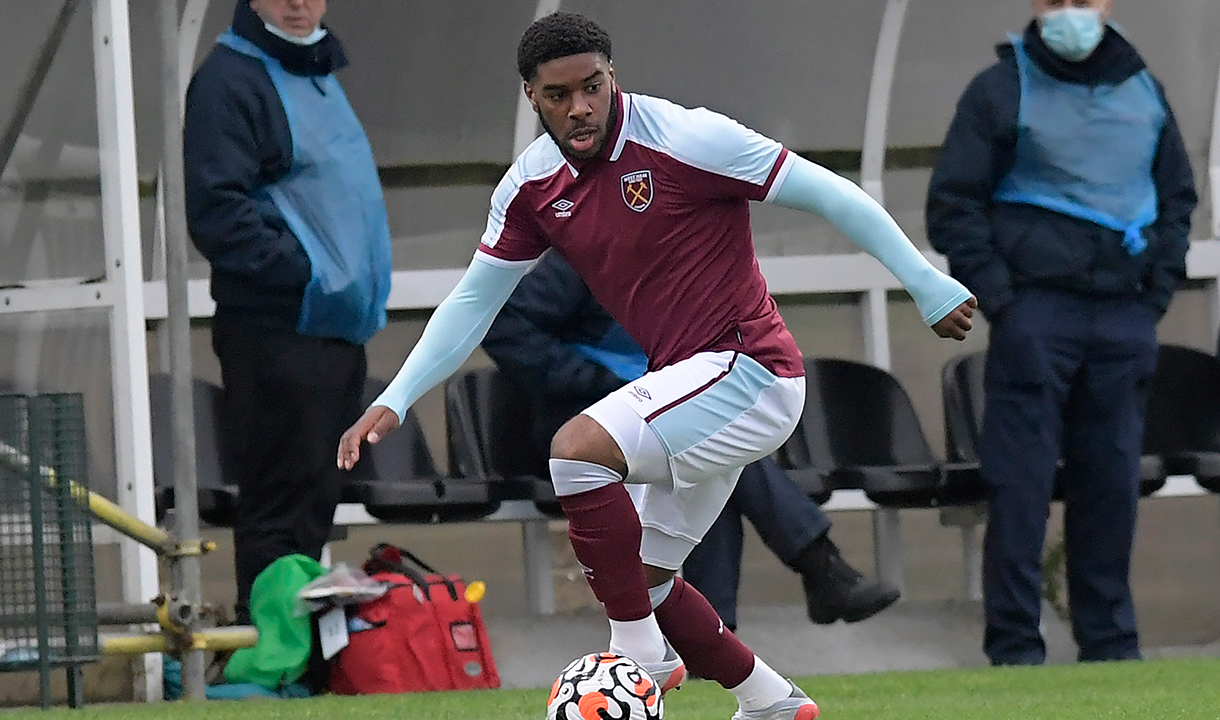 Jayden Fevrier: I’m excited to see what this season holds

Jayden Fevrier has been forced to bide his time – but the West Ham United U23s winger might now just be about to seize it.

The 18-year-old enjoyed an eventful summer off the pitch, signing his first professional contract as a footballer and winning the 2020/21 Dylan Tombides Award for the best scholar, but endured a more challenging time off it.

The popular teenager, who became West Ham’s youngest-ever reserve team player in October 2018, had been out of action since March with a knee injury which put an end to Fevrier in full flight.

That it came just days after the youngster had put in arguably one of the Academy’s top performances last season, scoring, registering and assist and captaining the U18s in their 5-0 win over Norwich City at Carrow Road in the FA Youth Cup, seemed a cruel irony.

So the welcome sight of Fevrier making his return to action on Saturday afternoon as a late substitute in the U23s’ 1-0 win over Manchester City – a result which temporarily took the West Ham development squad top of Premier League 2 – received cheers and applause from substitutes, coaching staff and spectators alike at Rush Green Stadium.

“It feels unreal coming back after so long,” Fevrier smiled. “Just to come out onto the pitch and play again was an amazing feeling.

“Being away for the game for so long has a lot of downs, so this is the biggest step – coming back and being on the pitch again.

“I’ve loved being back in training. I think everyone can tell you I’ve come in with a smile on my face because I was excited to play the game. I appreciate more every day that I’m here, having been out, and it’s just been lovely to be back.

“Now, I’m just really excited to train every day, play, and see what this season holds.”

Fevrier’s first appearance of the season coincided with not only a big fixture against the reigning Premier League 2 champions, but the first game under new West Ham U23s lead coach Mark Robson, who replaced the outgoing Dmitri Halajko over the November international break.

The positive winger typically threw himself straight into the action, making several direct runs at his City marker during a five-minute cameo in which he also fired a deflected shot narrowly wide of the upright.

“He [Robson] just told me to play my game really,” Fevrier explained. “I was just excited for this to be my first game back.

“I like to play against the big teams because I feel like I’m a big player, so I can show what I can do against them. It doesn’t really faze me who we’re playing, to be fair, it’s just lovely to be back.

“My game is really about making an impact. I hope you’ll see that for the rest of the season from me."

Fevrier was also delighted to receive both the Dylan Tombides Award for his efforts last season, having fought back from a knee ligament injury the previous campaign to play a pivotal role in the U23s’ fightback in Premier League 2 Division 1 and registering a further five goals and four assists for the U18s.

He smiled: “To be winning awards when I was not even playing, it shows that what I did when I was fit was recognised, and that gives me a lot of self-esteem and confidence to come back and keep going, so it was really good to be noticed.”

With West Ham’s U23s fighting at the opposite end of the table this season, sitting second – just a point behind leaders Arsenal just a game short of the halfway mark – Fevrier is hoping his return can spur his team on to further success.

The teenager noted: “That’s what you want: to be competing near the top.

“We’re very much capable of doing that this season and I hope I can come back and add more to the team – because we want to win the league.”