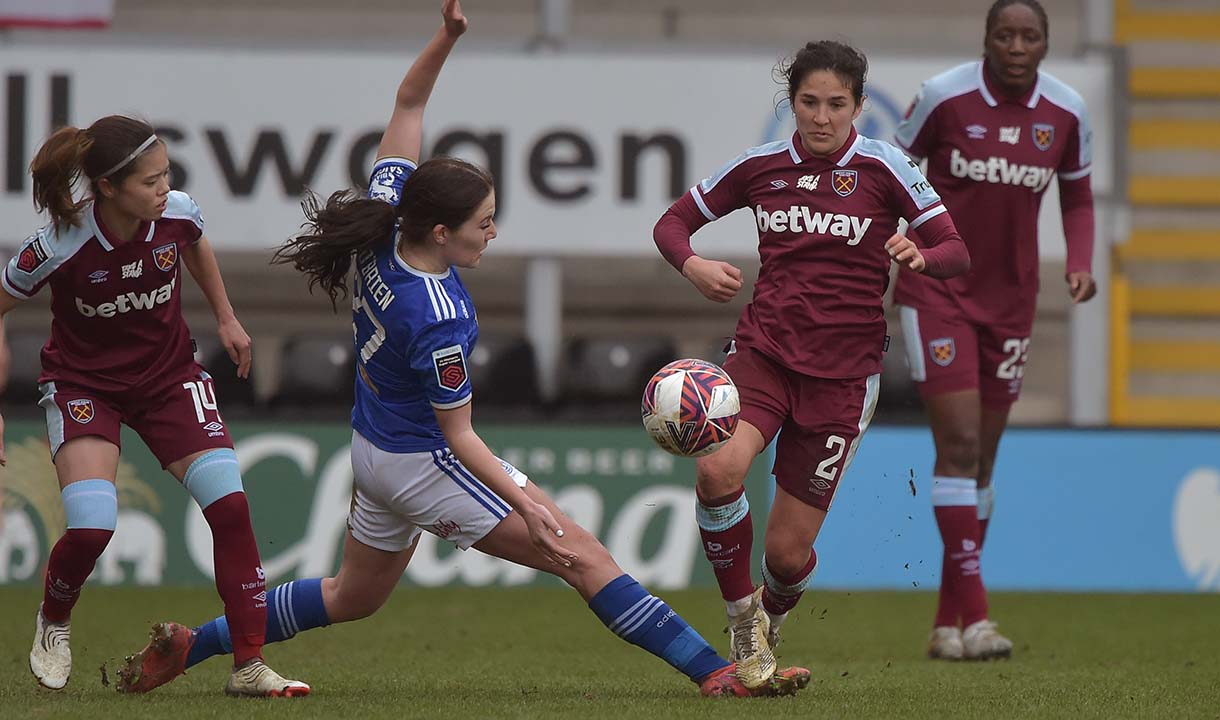 West Ham United fell to a disappointing 3-0 defeat away to Leicester City in the Barclays FA Women’s Super League.

Two early goals in the first half were a huge factor on the final result as a wicked, unfortunate deflection gave the Foxes a second-minute lead through Natasha Flint, before Ashleigh Plumptre headed in the home team’s second on nine minutes.

The Hammers pushed for a way back into the game as Yui Hasegawa and Katerina Svitkova both went close, but Leicester secured the three points with their third goal early in the second half as Freya Gregory tapped in at the far post.

The away side got off to the worst possible start as Leicester City took the lead after less than two minutes, albeit in fortunate circumstances.

A long ball was sent into the West Ham half for Leicester’s Flint to run on to. The forward had work to do but goalkeeper Mackenzie Arnold covered ground well to reach the ball first and looked to clear. Her clearance ricocheted back off Flint and looped over the Australian, into the empty net to give the Foxes the advantage.

Behind early on, the Irons had to go on the hunt for the equaliser. Kate Longhurst made a superb burst from the right wing-back position in possession, pushing into a dangerous area on the edge of the box, only for her effort to be blocked.

A set play on West Ham’s left would result in a second for Leicester inside the first ten minutes of Sunday’s match. Jemma Purfield’s free-kick evaded the Hammers defence and was met by Pumptre, who headed into the bottom corner under Arnold’s outstretched fingertips.

West Ham pressed for a way back into the match but had to remain cautious of Leicester’s counter-attack. Yui Hasegawa would go closest for Olli Harder’s side on the half-hour mark, collecting the ball from a failed clearance and unleashing a curling left-footed effort from distance. Her shot went narrowly wide of the far post. A positive in a difficult 45 minutes.

Manager Harder made two changes at half-time as the Irons sought a way back into the contest. Emma Snerle and Tameka Yallop took to the field in place of Claudia Walker and Mel Filis.

The first real chance of the second period would lead to Leicester’s third, however. Flint would clip the ball over to Shannon O’Brien, who sped past Gilly Flaherty and played a cross over to Gregory, who tapped in at the back post.

With it all to do, West Ham continued to press and search for a way back into the game. The best chances undoubtedly came through Katerina Svitkova, who twice forced Demi Lambourne into saves.

The first came as Zaneta Wyne’s deep cross reached the No10, only for the first-time effort to be tipped away, while a mazy run from the Czech Republic international resulted in a power shot straight at the Leicester goalkeeper on 63 minutes.

The Foxes, in truth, could have added to their tally and should have perhaps scored a fourth on 77 minutes when Flint played in substitute Charlie Devlin. The midfielder skipped past Arnold, only for Grace Fisk to recover exceptionally well and clear the ball away before the shot was taken.

Clear chances for the Irons were at a premium and defeat at the Pirelli Stadium was only West Ham’s fourth in the Barclays FA WSL this season.