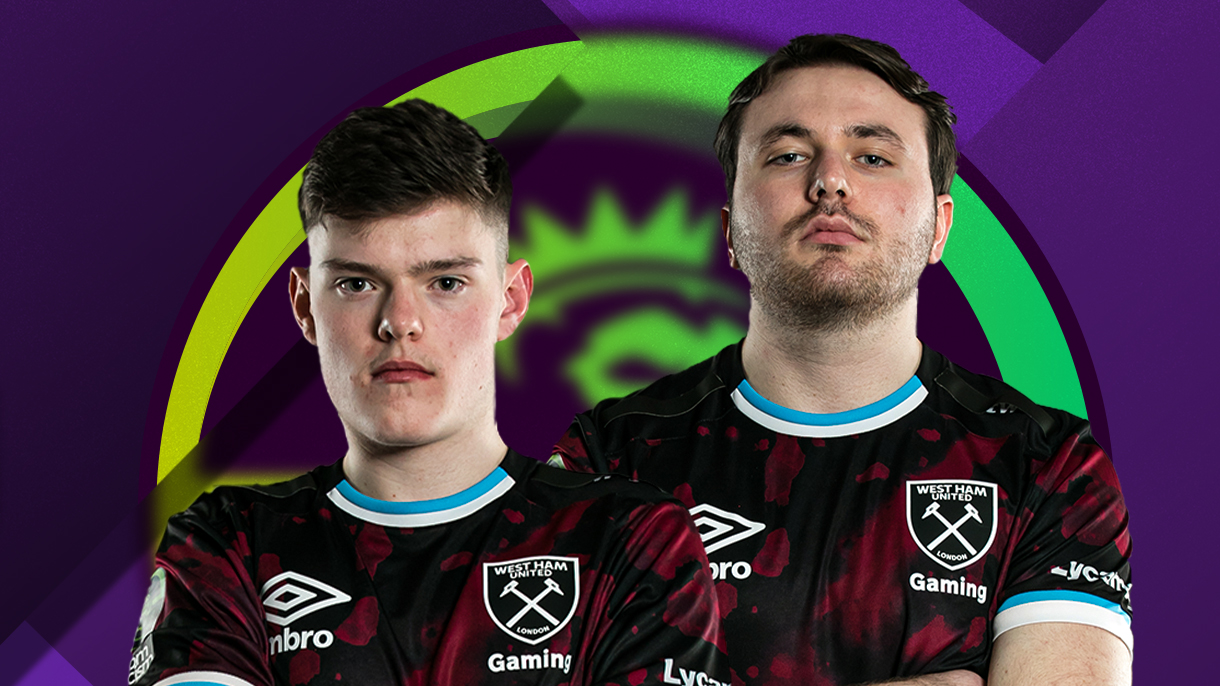 West Ham United departed the 2021/22 ePremier League Finals in the group stages, following a challenging round of matches over the course of Saturday.

Represented at the fourth iteration of the annual EA SPORTS FIFA event by Alfie 'AC RedLac' Calder and Tom 'TomSmithh7’ Smith – the former a West Ham Gaming professional, and the latter a lifelong Club fan – the duo were placed in a testing group, and struggled to establish themselves against more experienced opposition, losing three of their four games.

The Finals were the first major in-person FIFA event in the UK since March 2019, and were played with a spectacular backdrop at Here East in Queen Elizabeth Olympic Park to an audience of tens of thousands across numerous networks.

The tournament also boasted a new format for the 2021/22 season, with both players each playing one of two legs on their respective consoles – RedLac on Xbox Series X|S and TomSmithh7 on PlayStation5 – to generate an aggregate scoreline against every opponent.

The duo needed to secure a top-two finish to advance from Group A, but were drawn against top-tier talent in the form of representatives from Arsenal, Chelsea, Brentford and Brighton & Hove Albion.

It was the latter whom they kickstarted their campaign against on Saturday morning, RedLac getting the Hammers off to the perfect start with two early goals – and a steely defensive display – to secure a 2-0 first-leg triumph against ‘Jayden’ Groden.

The perfect start to our #ePremierLeague!@AC_RedLac has given us an early lead against @OfficialBHAFC! ⚒️

But the Seagulls got back into the game in the return match on PS5, as 2020 ePremier League Grand Finalist Marc ‘Marley’ showed all of his quality in securing a 3-1 second-leg win to ensure that – after a 3-3 draw on aggregate – both West Ham and Brighton started out with a point apiece.

After a short lunch break, the Irons then took on group favourites Chelsea, with RedLac once again first up, but this time falling to Jack ‘JSharp’ Sharp 0-2 in the first leg.

Dat passing tho 😍@tomsmithh7 gets us back in the game against @ChelseaFC!

And while TomSmithh7 played some superb FIFA in twice bringing the deficit back to just a single goal – causing some nervy late moments for Dan ‘Stingrayjnr’ Ray in the process – the Hammers ultimately fell to a 2-3 defeat on aggregate.

With just a solitary point on the board from their opening two games, West Ham knew that their next game, against newcomers Brentford, was a mathematical must-win.

Yet the Bees were to prove the competition’s Day One surprise package, with breakout stars Sam ‘SamBrwster’ Brewster (Xbox) and ‘Czohino’ (PS5) securing 3-2 and 4-0 wins respectively – the latter a result of the Hammers’ need to commit players forwards late on – before going on to top the group for Brentford.

Those results confirmed West Ham’s status as the first team to exit the 2021/22 Finals, with just eight of the 20 Premier League clubs set to advance to the quarter-finals on Day Two.

And a tough event for the Irons came to a close late on Saturday evening with a 3-4 defeat on aggregate to Arsenal.

Super strike from @tomsmithh7's Sancho to give us the lead vs @Arsenal! 💪

RedLac was up first and secured a 2-2 draw on Xbox against ‘AFC Billy’, before TomSmithhh7 was beaten 1-2 by Ryan ‘actualemperor14’ with virtually the last kick of a game he deserved more from, leaving the Hammers with just a single group-stage point for the day’s efforts.

Nevertheless, both players can take pride in their play in several particularly closely-fought legs, as key moments in crucial fixtures ultimately took Group A away from them on the day.

RedLac will now look to bounce back straight away, as he works towards preparing for the next individual FIFA Global Series major event in early April.