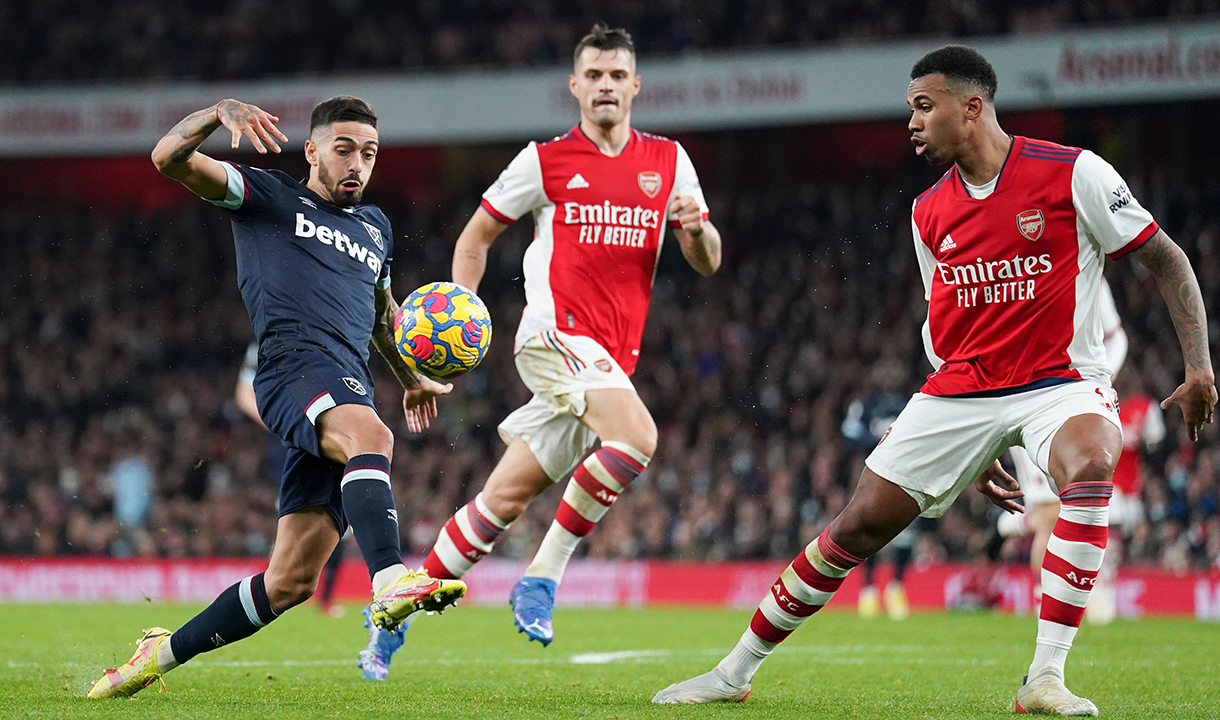 West Ham United were leapfrogged by Arsenal in the Premier League table following a 2-0 defeat at the home of their North London rivals.

Clinical finishes at the start and end of a fiercely-contested second half ultimately proved the Hammers' undoing in a match they finished with ten men, following a contentious second yellow card for Vladimír Coufal midway through the period.

Gabriel Martinelli had raced clear to roll the ball past Lukasz Fabianski two minutes into the half, the Pole later superbly saving Alexandre Lacazette's penalty kick having earlier turned Kieran Tierney's volley onto the crossbar.

The dismissal made West Ham's task all the more difficult in the closing stages as they sought a route back into the match, and Emile Smith Rowe eventually netted the home side's second goal on the counter attack late on.

The Hammers began Wednesday’s game two points ahead of their hosts, and the proximity between the two sides was reflected in a competitive opening to a game contested by two committed sides.

Indeed, it was West Ham who enjoyed the first sight of goal when Manuel Lanzini won a free-kick which – after some initial confusion – culminated in Declan Rice’s low cross being played back for Craig Dawson to strike. The No15 duly produced a centre-back’s finish from 25 yards, slicing across the ball and skewing his effort wide.

Often dropping back, Rice made three good clearances from Arsenal set-pieces in the opening 20 minutes, before his own side threatened from one. The presence of Michail Antonio – on his 200th West Ham appearance – caused Aaron Ramsdale to flap at the ball from a Jarrod Bowen corner, but no Hammer could get on the end of the loose ball.

Despite David Moyes’ men getting off to a decent start, however, it was the home side who began to dominate the possession – and shot count – as a stop-start first half wore on.

West Ham remained compact in the face of waves of Arsenal pressure, owing much to centre-back Dawson for a series of well-timed challenges – the first coming when Ødegaard teed up Lacazette for a strike inside the visitors’ box.

And it was a persistence which almost paid off during the Hammers - who had struggled for fluency prior - in their best spell of the first half.

Bowen drilled a free-kick into the box which was headed out by Ben White, but only as far as Pablo Fornals on the corner of the box. The Spaniard killed it instantly, set himself well and whipped a shot narrowly wide of Ramsdale’s far upright.

Moments later, Arthur Masuaku almost provided a repeat of his winning London derby goal against Chelsea, striking across a Lanzini lay-off and only just firing over Ramsdale’s crossbar.

But it was Dawson who was impressing the most in a West Ham shirt, diving in front of Ødegaard’s first-time effort after Bukayo Saka had made inroads down the right-hand channel.

And when the ball was cleared as far as Kiernan Tierney on the edge of the box, the Hammers were indebted to a superb save from ex-Gunner Lukasz Fabianski, who scrambled across his goal to turn a dipping half-volley onto the crossbar before the ball was smuggled away.

Just a minute before the whistle, Dawson was in the right place at the right time once more, sliding in to prevent Gabriel Martinelli from tapping into an empty net after Fabianski parried Lacazette’s curling low effort.

It was a level of pressure which West Ham simply could not sustain – and Arsenal took full advantage in the moments immediately after half-time.

Lacazette dropped into midfield and, espying a small gap between Dawson and Coufal, slipped in strike partner Martinelli, who rolled the ball across Fabianski and into the bottom corner.

Only a fine sliding block from Dawson then prevented Xhaka a clean strike at goal from the edge of the box, but the Irons remained in contention, and when Ødegaard played a sloppy square ball across his own area, Bowen seized on it and curled towards the far post – a deflection off the trailing leg of Gabriel forcing a fine stop from Ramsdale.

Ødegaard was the next Arsenal player to test Fabianski with a low free-kick – admittedly on the goalkeeper’s side, before Dawson once again put his body on the line to take Partey’s half-volley from range on the chest.

The Hammers enjoyed a brief resurgence midway through the second half, Bowen shooting wide at the near post from Antonio’s low cross, but those hopes looked set to be extinguished at the culmination of Arsenal’s next move.

When Diop’s header fell short for Dawson, Lacazette was first to the loose ball and Coufal – sliding in to cover his teammate, was penalised for catching the Frenchman on the follow-through.

After a brief pause, referee Anthony Taylor awarded Arsenal a penalty and showed Coufal an arguably harsh second yellow card, the right-back pleading his case for having successfully won the ball – but nevertheless given his marching orders.

And so the chance arrived for Lacazette to net in a fourth consecutive appearance against the Hammers – but Fabianski, stretching every inch to his left, produced an outstanding penalty stop to keep his side within touching distance.

The Irons were clinging on to their opponents’ coattails, with Diop the next defender to make a crucial intervention and deflect Saka’s close-range finish round the post after Martinelli had squared.

There was still time for 20-year-old Harrison Ashby – awarded his full debut in the UEFA Europa League the previous week – to make his Premier League debut as a late substitute for Fornals.

But the points were wrapped up late on when, with the Hammers pushing numbers forwards, the Gunners countered at pace and Emile Smith Rowe, himself a second-half substitute, smashed a low finish between the legs of Diop and into the bottom corner.