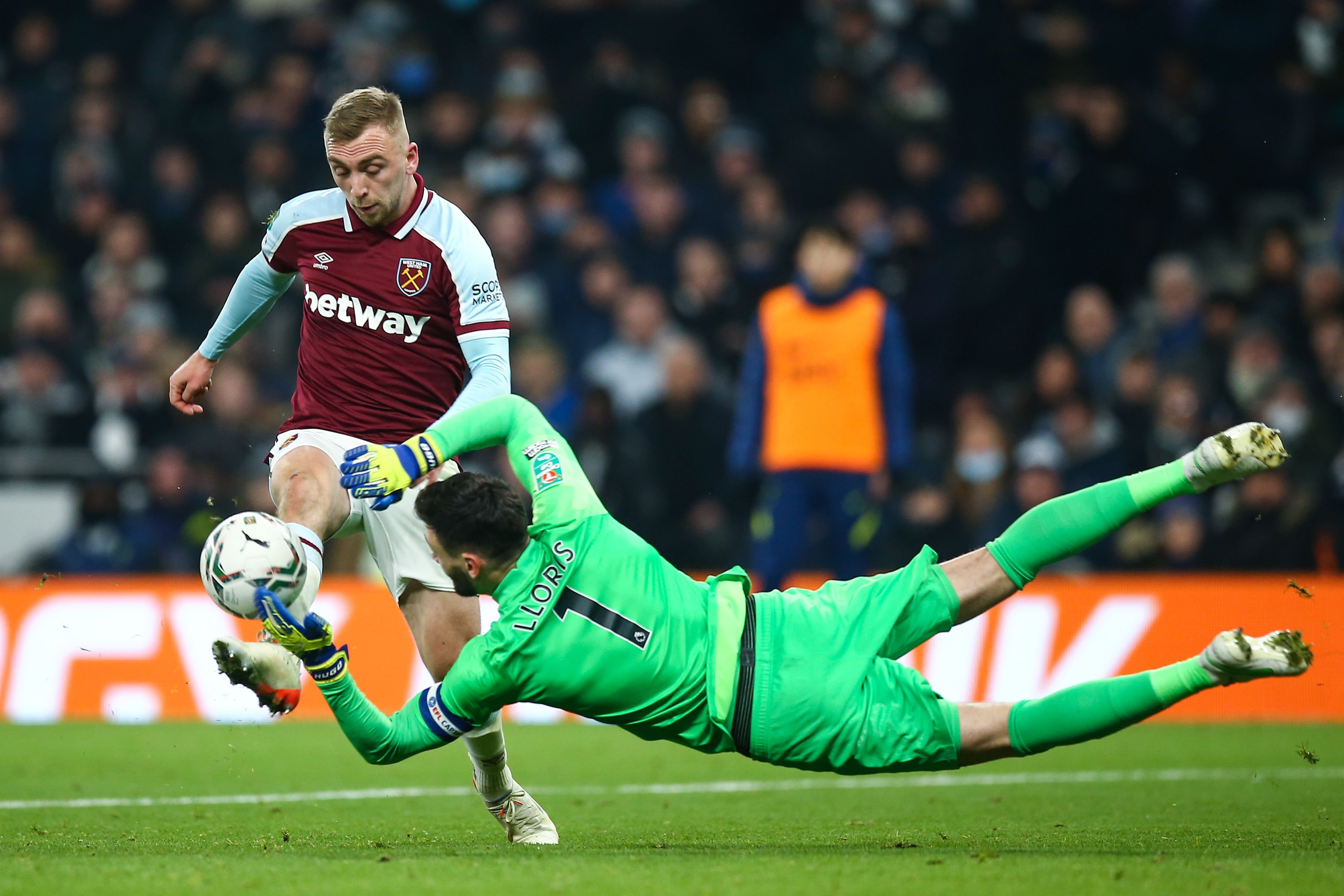 West Ham United's 2021/22 Carabao Cup campaign came to a close in the fifth round of the competition with a narrow 2-1 defeat at Tottenham Hotspur.

The Hammers put in a positive performance and arguably provided the majority of the attacking thrust in the game, seeking their first berth in the semi-finals since 2013/14.

But David Moyes' team came out on the wrong end of a madcap quickfire exchange of goals midway through the first half which saw Steven Bergwijn side-foot the hosts ahead, Jarrod Bowen turn and finish neatly for the Hammers moments later - and, almost immediately afterwards, Lucas Moura restore the hosts' advantage from close range.

West Ham toiled and fought for a route back into the tie in a tighter second half, but came up against Tottenham goalkeeper Hugo Lloris in inspired form, and ultimately could not find a second equaliser.

After a rare week’s gap between games following the postponement of their last Premier League fixture, Hammers manager Moyes made four changes to his starting XI from the defeat at Arsenal, with Ben Johnson returning from a four-match absence and 20-year-old Harrison Ashby handed a third senior start of his career.

Goalkeeper Alphonse Areola returned between the posts for the Cup tie, with Croatian Nikola Vlašić starting in the Carabao Cup for the second round in succession and Bowen selected to lead the line in the absence of Michail Antonio.

A lively start saw both sides supply the kind of tackles you’d expect of a London derby which coincides with a Carabao Cup quarter-final.

After several speculative efforts, the first clear chance arrived after eleven minutes courtesy of an admittedly outstanding through ball from Lucas Moura, freeing Harry Kane in behind. Forced wide, the England captain arrowed a shot across Alphonse Areola – but the Frenchman duly responded with a strong two-handed save.

The Hammers were quick to respond, Ashby winning a free-kick on the right which Bowen curled in with typical venom. A near-post deflection caused uncertainty for Hugo Lloris, who reacted to punch away with two hands – and then did similarly moments later from Manuel Lanzini’s corner kick.

Nikola Vlašić was next to go close in Claret and Blue, controlling an Arthur Masuaku pull-back and taking perhaps a fraction too long to unleash his shot, eventually being closed down.

But despite the direction of the traffic, Tottenham were the side who opened the scoring, Steven Bergwijn pinning Craig Dawson with his back to goal, exchanging passes with Pierre-Emile Højbjerg and finishing low from the return pass.

Once more, West Ham were quick to respond, Vlašić curling in a cross which Tomas Souček, running across Davinson Sanchez, glanced towards the top corner – only for Lloris to produce a stunning fingertip save.

That same combination linked up after the Irons recycled possession from the subsequent corner, Vlašić’s high ball this time met by a looping header from the Czech midfielder – again requiring Tottenham’s No1 to tip the ball over his crossbar on the stretch.

And from the immediate subsequent corner, Bowen curled in, Declan Rice pinned Lloris and – from five yards out, albeit admittedly likely unsighted – Craig Dawson nodded over the unguarded net.

After Souček won the ball high up the pitch, Vlašić attempted a low drive from 25 yards which fell for Bowen with his back to goal. The No20 still had plenty of work to do, but did it with some aplomb, switching feet swiftly onto his right and placing a delightful low finish into the bottom-left corner.

The game had exploded into life, but sadly West Ham could not hold onto that parity as Tottenham immediately retook the lead. Bergwijn beat Lanzini with several stepovers before slipping the ball across for Moura, whose scuffed low finish squeezed beneath Areola.

The chances were arriving quicker than the raucous atmosphere could respond, Lanzini curling an excellent low cross towards Souček and only a last-ditch sliding tackle from Oliver Skipp denying the midfielder another immediate equaliser.

The breakneck pace settled slightly but Bergwijn was continuing to look lively for the home side, testing Dawson’s timing and reactions after some hesitant defending just before half-time looked to have allowed the Dutch forwardto  run onto the ball in a threatening position.

The early exchanges of the second half were played at a more pedestrian pace as Tottenham looked to manage the game, but the ever-lively Bowen attacked an early in-swinger from Masuaku and saw his header fly only just wide of the post.

The West Ham No20 had the game’s next opportunity, being picked out by a brilliant over-the-top ball from Lanzini. Bowen ran between two defenders but, as he brought the ball down, Lloris sprinted from his line to get a hand to the ball, and it squirmed away from the Hammers’ attacker.

It was a rare clear opening in the third quarter of the game which saw Tottenham defend deep and look to break on the counter-attack, only an important intervention from Issa Diop stopping a Harry Kane cross from finding substitute Harry Winks.

Moyes made a double substitution heading into the final 20 minutes of the game, playmakers Pablo Fornals and Said Benrahma both entering the fray as the Irons sought further invention.

And it was a decision that almost paid instant dividends, Ashby’s cross deflecting kindly off a Tottenham defender into the path of Benrahma, who attempted an ambitious turn and strike, but saw his effort fly high over the bar.

The Algerian continued to look sharp, firing a couple of efforts from distance which were blocked on the edge of the box, but Tottenham had numbers back and were doing all they could to run down the clock.

And it was Benrahma who produced the next moment of inspiration with ten minutes remaining, flicking up Andriy Yarmolenko’s square ball on the edge of the box and firing a dipping volley narrowly wide of Lloris’ bottom corner.

Attacking momentum belonged only to the team in Claret and Blue in the closing stages, with Moyes’ men dominating possession and pinning the hosts back into their own box.

But it was just not to be their day, with Yarmolenko's injury-time shot looping off a Tottenham defender and landing, agonisingly, on top of Lloris' crossbar, Tottenham seeing out the additional period to advance at the Hammers' expense.