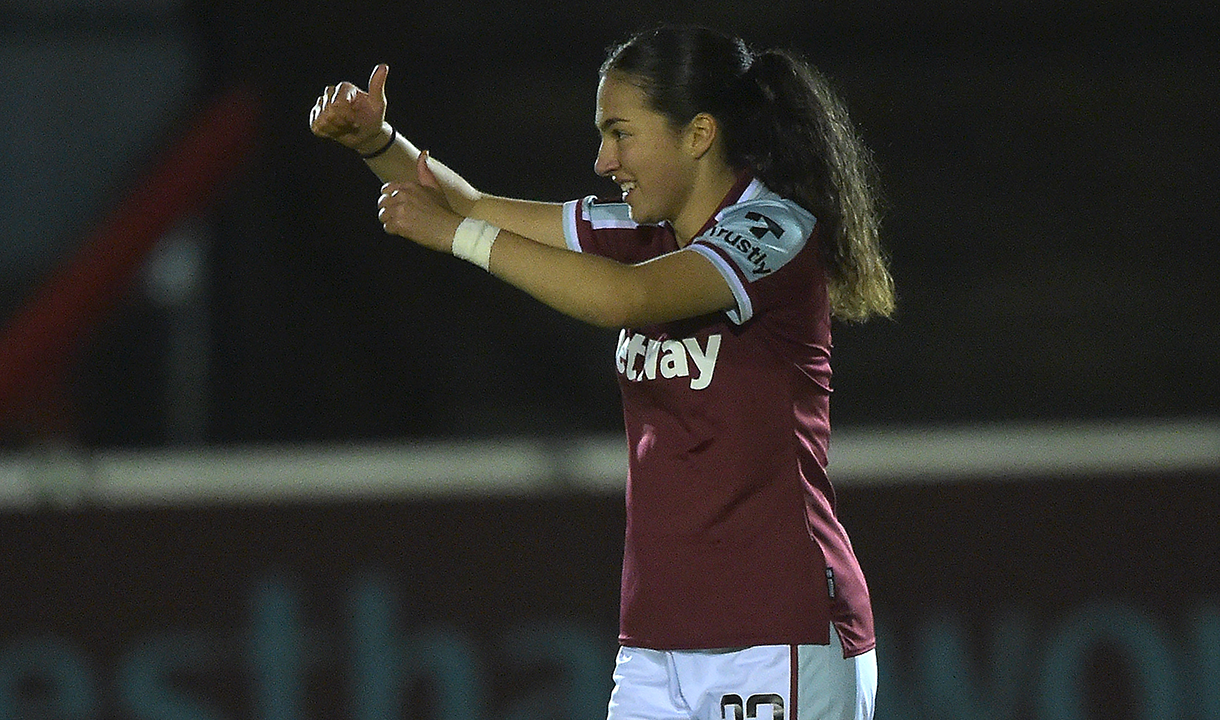 Young West Ham United fans across the world dream of scoring a goal for the Club they support, and one of them got to live it on Wednesday evening.

Halle Houssein, who signed for the Irons on a dual registration deal from Arsenal earlier this month, came on to make her debut for Olli Harder’s side against Chelsea in Wednesday’s Continental League Cup quarter-final.

Just moments later, with only her second touch as a senior player in the West Ham team, the 17-year-old had her first goal in senior football, coolly sweeping home past the experienced Ann-Katrin Berger in the Chelsea net.

While West Ham would lose the highly competitive contest 4-2 at the Chigwell Construction Stadium, Houssein achieved a moment that will live with her for the rest of her life.

It’s a dream come true for me to score on my debut for the team I support.

“I never dreamed my debut be like this,” the midfielder told West Ham TV. “It’s a dream come true for me to score on my debut for the team I support.

“It’s a bit bittersweet, of course, because we didn’t win the game, but I’m pleased with my goal. I really enjoyed that moment.

Houssein got a loud welcome from the West Ham supporters when she entered the fray on 81 minutes, at a time when the Irons found themselves 4-1 down to the reigning champions of England.

Kateřina Svitková had given West Ham hope in the first half with a sensational strike from distance, levelling the score at 1-1 after Pernille Harder’s opener, but the Chelsea forward would go on to complete her hat-trick while Erin Cuthbert would also net for the away side.

Reflecting on the game, Houssein said: “We were very good in the first half. We dominated, I think, and then Chelsea had to up themselves to get on top and we lost it from there. There were some good signs, though.

“When I came on, the manager told me to just do what I do in training. I get a lot of encouragement from him, from Paul Konchesky, from Brian as well. Aidan [Boxall, West Ham United Women General Manager] has done a lot of mentoring of me as well. So Olli told me to do what I do best and not to think about it too much.”

The youngster has impressed during training sessions since beginning work with the Hammers earlier this month, and Houssein is enjoying the opportunity to show what she is capable of in first-team football.

With a quick turnaround for West Ham United Women, at home to Everton on Sunday, the midfielder hopes to keep getting better and knocking on the first team squad’s door.

She added: “I’m finding training really good. I’m really enjoying it. Being here and playing first-team football has got me moving the ball quicker and got me thinking quicker as well. I’m improving every time I train.

“We need to take some of the positives from this game into Everton on Sunday. You play your best football when you’re confident, so we need to check what we’ve done good in this game, keep improving on it, know our weaknesses and what we need to be better at, and be ready for the next game.”