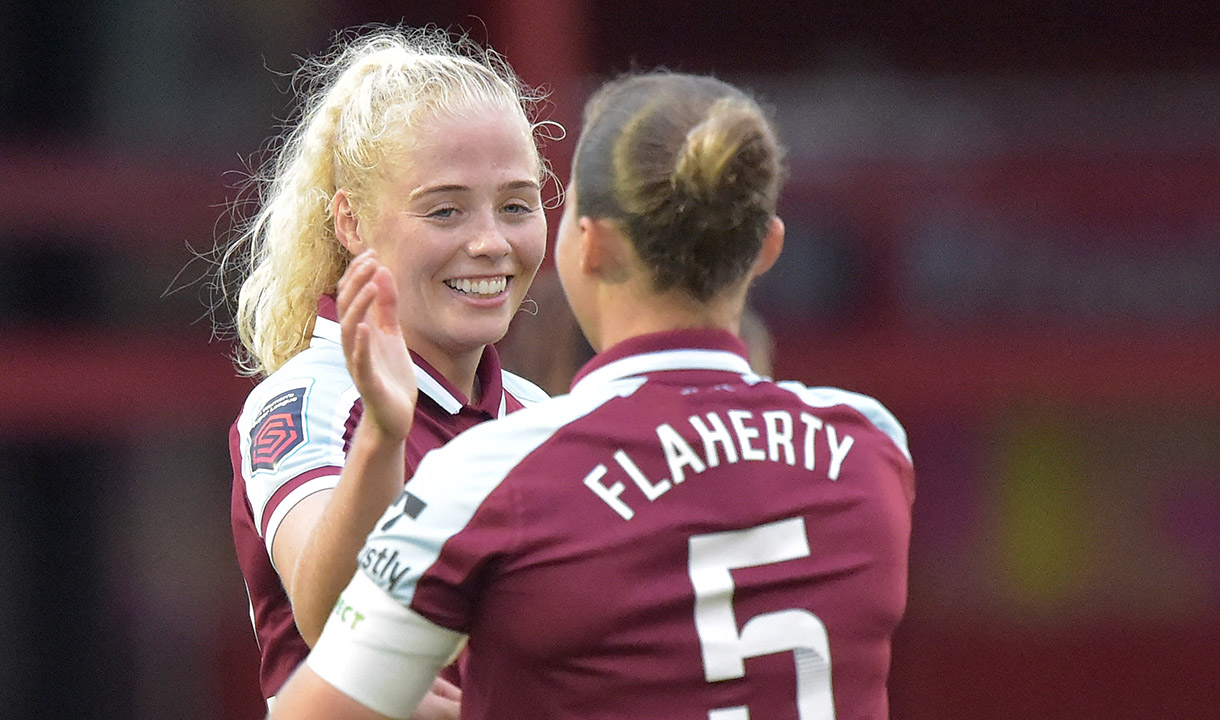 Grace Fisk: West Ham United Women have to brush ourselves off and go again against Birmingham City

Grace Fisk has called on West Ham United Women brush off Sunday's disappointing 2-2 draw against Reading - as they prepare to face Birmingham City in the Continental League Cup on Wednesday evening.

Fisk scored her first goal for the Club in the draw – heading in the second after Lisa Evans had also notched her first in Claret & Blue. But a valiant comeback from the Royals was clinched as Emma Harries stabbed the ball home deep into second half injury time - inflicting heartbreak on the east Londoners.

The 23-year-old defender reflected on what was a frustrating result after her team had dominated for the majority of the match.

“It’s disappointing to not come away with the win considering we were 2-0 up in the game, Fisk told whufc.com. “We’re all frustrated by it [the result] but having this three game week means that we’ve got to get over it pretty quickly and go again on Wednesday.

“We’re back in training, working hard on trying to fix the things that didn’t go so well in that second half – we played some really good football and had a lot of chances to kill the game off and then in the last 15 minutes we were under the cosh a bit.

“We need to be smarter and savvier when we’re ahead and making sure that we hold on in those situations - we’ve got to brush ourselves off now and go again.”

It’s been a frustrating start to the new campaign for Fisk, with the defender going off injured on the opening day and has been restricted to a substitute appearance against Arsenal since that fixture.

And for a player that played every single minute of the 2020/21 Barclays FA Women’s Super League campaign, the spell out of action has been challenging. However, the feeling of scoring her first goal for the club saw all of that frustration vanish – albeit until the full-time whistle sounded.

“It was lovely to be back out there, it’s been a good few month now so it was nice to be back on the pitch with the girls.

“Getting my first goal for the club was also good – it was a lovely assist from Gilly. It was obviously overshadowed a little bit by the result, as three points is the most important thing but it wasn’t to be.

“It’s not enjoyable for anyone to be on the sidelines, but I had Maisy [Barker] with me, as well as Grace Garrad and Lisa [Evans] at different spells during my time out injured – so it’s nice to be able to do your rehab with fellow players.

“I still felt connected to the team and I had to make sure I was doing everything that I could to be back out there as quickly as I could, ready to compete.”

The Hammers will hope to put Sunday’s defeat behind them when they take on Birmingham City, who’s draw against Olli Harder’s side is their only point so far this season.

It’s also a big opportunity for the east Londoners to put themselves within touching distance of the knock-out stages of the competition – with their final match in Group E coming up in December against Brighton & Hove Albion.

Fisk thinks that her side owe it to themselves to go out and get three points after only drawing with the Blues in the league back in October.

“We all came away from the last game against Birmingham thinking that we should have got more than just a point. From my view on the sideline, I think the team definitely deserved all three points, but it wasn’t to be.

“It gives us that extra incentive to go there and get all three points. We go there with the full intention to win the game as I’m sure they are as well – the Conti Cup is a competition that we want to go far into and hopefully all the way.

“It’s a big game for us and we need to make sure we play to our best ability – Birmingham are good at what they do which is shutting out teams, so we need to bring the tempo and pace to the game,” she concluded.