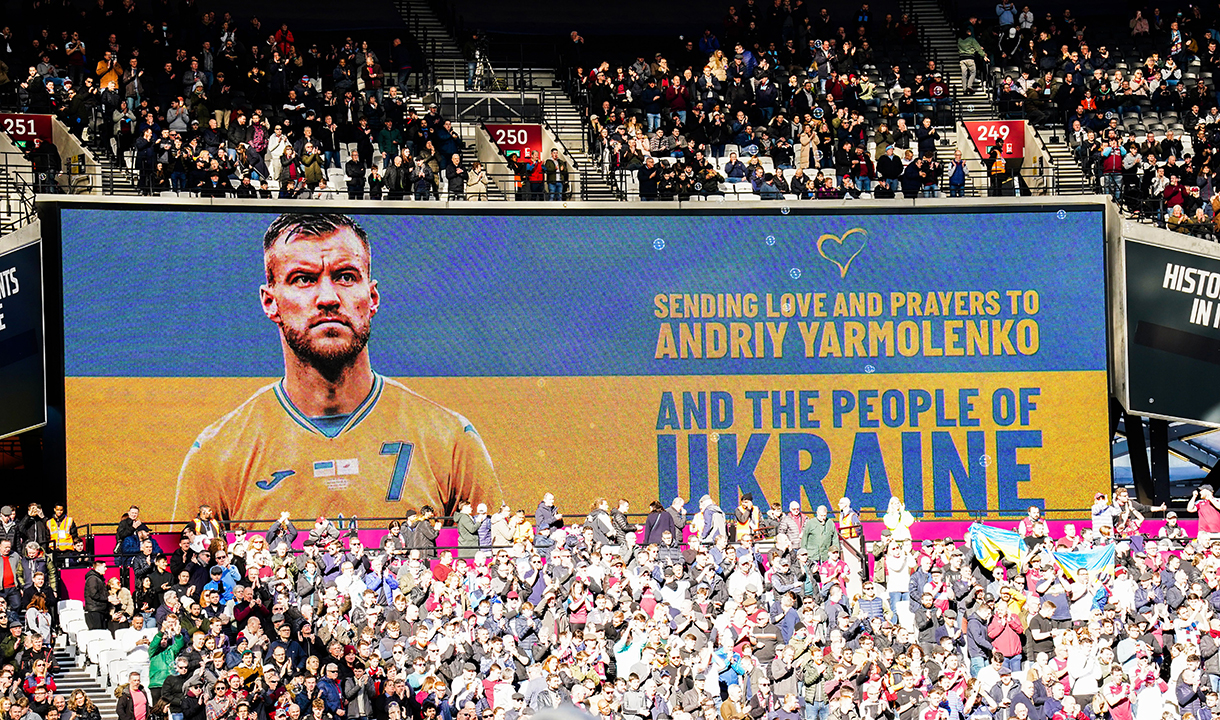 While some might have stated otherwise, life and death really is more important than football – and that was clearly evident at London Stadium on Sunday.

West Ham United, its players, staff and supporters – and Wolverhampton Wanderers – came together in support of Andriy Yarmolenko and against the ongoing crisis in Ukraine.

The big screens inside and outside London Stadium displayed a huge digital banner showing Yarmolenko – known as ‘Yarma’ at the Club – and the colours of his country, yellow below blue, representing a cornfield under a bright sky.

Sadly, darkness has fallen over our No7’s homeland in recent days, with an invasion by Russia drawing international condemnation, with football players and fans throughout Europe and beyond showing solidarity for their Ukrainian brothers and sisters.

West Ham’s players warmed-up in t-shirts emblazoned with Yarmolenko’s name and number, reminding Ukraine’s 106-cap captain and second highest goalscorer of all-time that he may be on compassionate leave, but he remains at the front of all our minds.

Then, as he led his team out, captain Declan Rice held the forward’s Claret and Blue shirt in a further show of unity, to loud acclaim from the capacity crowd inside London Stadium.

Few players can be more popular in their dressing rooms than Tomáš Souček is in West Ham United’s!

The gentle giant leads by example with his work ethic, while his amiable personality and sense of humour have also endeared him to his teammates, manager, coaches and supporters alike.

However, manager David Moyes has conceded that the No28 has not hit the heights of the 2020/21 season in recent weeks and months, and Souček himself expressed a determination to rediscover his best form.

He did that on Sunday, covering every blade of grass at London Stadium, repeatedly breaking up Wolverhampton Wanderers’ attacks and, of course, arriving in the perfect place to prod West Ham to a valuable Premier League victory.

If the Czech Republic captain can start finding the net consistently again over the closing third of the season, West Ham’s chances of finishing 2021/22 as strongly as they did 2020/21 will be significantly boosted.

Kurt Zouma has undoubtedly stepped up in the absence of Angelo Ogbonna, and on Sunday the France international produced his best performance yet in a West Ham United shirt.

The 27-year-old was quite simply unbeatable against Wolverhampton Wanderers, taking full advantage of David Moyes’ 5-2-2-1 formation to step up and dominate his opponents throughout.

The defender has yet to be dribbled past this season, by anyone, and he was again perfect in his ground duels.

And Zouma was also outstanding in the air, repeatedly towering above his opposite numbers to head the ball powerfully clear of danger.

Factor in 85% passing accuracy and what you had was a Man of the Match performance from our No4.

He might not have scored his first Premier League goal since New Year’s Day, but nobody could doubt the effectiveness and selflessness of Michail Antonio’s performance against Wolverhampton Wanderers.

The No9 have absolutely everything for his team on Sunday, giving Wolves’ three centre-backs no time to settle, pressing high, coming short, holding up the ball, spinning and running in behind time after time.

While his distribution may never be his strongest point, Antonio made a team-high four key passes and provided the assist for Tomáš Souček’s second-half winner with a well-weighted, accurate square ball that the Czech could guide past goalkeeper José Sá with one touch.

Earlier, the centre-forward had tested Sá with a rasping shot and was denied another clear chance when Zouma took the ball off his toe on the edge of the six-yard box.

But, while he didn’t score, Antonio’s all-round performance was one to savour and provide plenty of encouragement for big games in league and cup in the coming weeks.