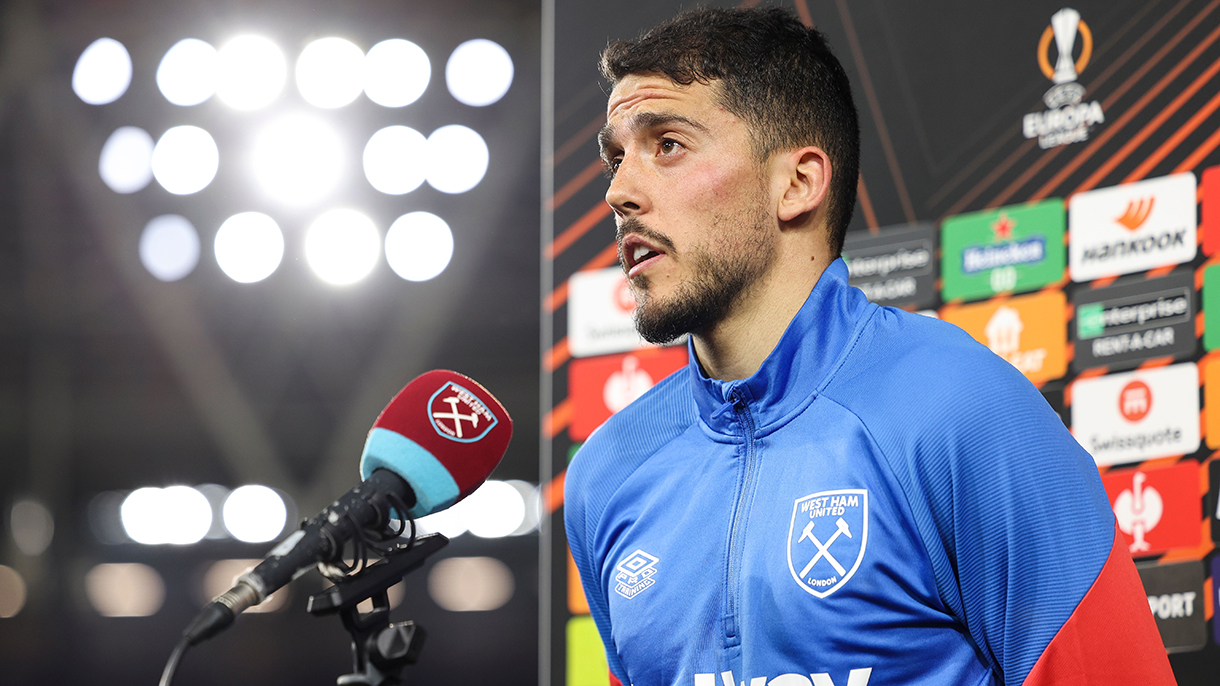 Fornals: We can take a lot of good things forwards

Although Pablo Fornals admitted he went into West Ham United’s UEFA Europa League quarter-final against Olympique Lyonnais wanting more from the home leg, the midfielder was pleased to emerge with a 1-1 draw.

The Hammers rose to yet another challenge on the continent against technically impressive Ligue 1 opposition at London Stadium on Thursday, having gone a man down on the stroke of half-time when Aaron Cresswell was controversially dismissed.

Despite the visitors understandably going on to dominate possession and the shot count in the second half, Fornals and his teammates were not deterred.

Indeed, the No8 was on hand to intercept a Lyon pass and kickstart the move which led to a through-ball – via a deflection off Jerome Boateng – reaching Jarrod Bowen, who squeezed home the tie’s opening goal.

Tanguy Ndombele’s equaliser would ultimately peg the Irons back, but Fornals was pleased with his teammates’ collective response to gruelling circumstances.

“I think it was an unbelievable performance with the characteristics of the game,” the 26-year-old told West Ham TV.

“Nobody expected to play more than 45 minutes with one player less. I didn’t see, I didn’t check it, but I think in a game at this level, one decision like that can destroy the whole week of a team.

“After that, the work of the team – we stuck at it – was really good. Everyone worked their socks off for the whole game and we’re still alive for the second leg.

“If we can play like this with one player less, I can’t imagine how we’re going to do it with eleven.

“It wasn’t easy to be fair. Everyone had to run more than ever, but even like that, we had good chances to score and not just the goal – we had a few more.

“Obviously they’re a good team, of course. They are here for a reason, so they saw it with us as well and they tried to play short passes, going out to cross, but I think everyone was brilliant.”

The abolition of the away goals rule in European competition this season means the Hammers will travel to Lyon next week with the quarter-final tie truly all square.

With that in mind, while Fornals admitted that Bowen’s strike – his second in two games since returning from a four-match absence with injury – wasn’t the cleanest goal, it certainly could carry vast significance in the grander context of the tie.

“A goal is always a goal,” he noted. “Obviously for us, Jarrod is massive.

“He’s been back two games and scored two goals, so for us he’s unbelievable. It’s what we need from him and we are happy to have Jarrod back.”

Fornals was also delighted with the backing of the capacity crowd at London Stadium, who once again spurred their side on to an impressive showing in the Europa League.

The midfielder smiled: “Obviously here at home, we didn’t expect less than this and with one player less, I think the support of the fans equalised the game a bit more, giving us fresh heart for the last moments and for the whole second half.

“I think we can take a lot of good things from today, also learn from the bad things, and try to improve as we always try to do.”