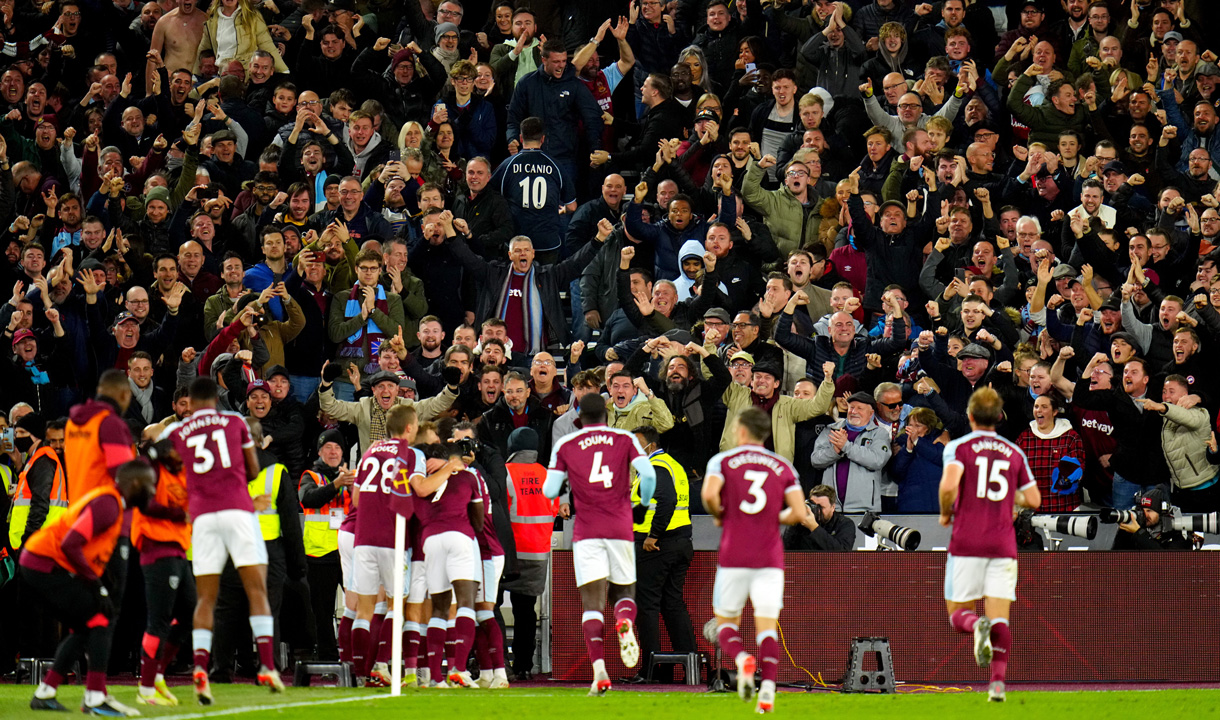 Anyone within the vicinity of London Stadium on Sunday evening was left in no doubt about one thing – West Ham United are massive.

From well before kick-off until long after the final whistle, strains of Bubbles, Everywhere We Go and a setlist of other popular chants were being sung loud and proud by the Claret and Blue Army.

The atmosphere in and around the Hammers’ iconic home was up there with the best it has been in the five-plus years since the Club moved in.

Tens of thousands of West Ham supporters headed to the match full of hope and expectation that their in-form team could get one over another of the Premier League’s top sides.

And, through a combination of all the qualities that have turned the Irons into one of those sides themselves, their team did just that.

Each goal was met with a resounding roar of celebration, while there was seldom a moment when the noise levels dropped below ear-piercing.

On another day to remember at London Stadium, the 60,000 capacity crowd yet again played their full part in it.

West Ham United’s victory over Liverpool made it six wins in seven matches in the space of 22 days between the October and November international breaks.

When the Hammers kicked-off against Everton on 17 October, they sat ninth in the Premier League.

West Ham were only denied seven wins out of seven by an unfortunate late Tomáš Souček own-goal in Genk, but six out of seven isn’t bad!

Set-piece situations may not be the prettiest part of football, but West Ham United’s expertise from set plays has become a thing of beauty.

The Hammers scored twice more from corners in Sunday’s win over Liverpool, taking their number of set-piece goals scored since David Moyes returned to the Club in December 2019 to 32 – six more than any other Premier League club over the same period.

The manager empowers assistant coaches Paul Nevin and Kevin Nolan to dream up new and innovative ways to get the ball into dangerous areas and create space for players to get on the end of those deliveries.

With Aaron Cresswell, Jarrod Bowen and Pablo Fornals all able to provide that delivery and the likes of Angelo Ogbonna, Kurt Zouma, Tomáš Souček, Craig Dawson, Declan Rice and Michail Antonio all eager to convert them, West Ham have become the Premier League’s set-piece masters.

4. The points and goals keep coming

Never before have the Irons collected so many points from that number of games in the Premier League, and it is 41 years since a West Ham team of any description amassed more.

Back then, it was John Lyall’s Second Division title-chasers who took 17 points from eleven games but, back then, there were only two for a win, so their seven wins and three draws would be worth 24 now.

And it was the same in 1975/76, when the Irons kicked-off with the same record, again taking 17 points, this time in the First Division.

In 2021, only Manchester City (83) and Chelsea (67) have collected more Premier League points than West Ham’s 65. City have played two more games than the Hammers, too.

Only City (84) have scored more Premier League goals than West Ham’s 62 this year, too.

Had many pundits and commentators had their predictions proved correct, Jarrod Bowen would be linking up with the England squad today, rather than enjoying a rare day off.

West Ham United’s lightning-quick winger enjoyed another productive afternoon on Sunday, assisting two of his team’s three goals, the first with a devastating run and pass for Pablo Fornals to finish low past Alisson, and the second with an inch-perfect far-post corner for Kurt Zouma to head home.

That’s now five assists and three goals for Bowen in 17 appearances this season, as the 24-year-old turns eye-catching performances into direct goal involvements.

When you factor in his work-rate and defensive contribution up and down the right flank, and ability to play through the middle as a centre-forward, you can easily understand why he is being tipped to become part of Gareth Southgate’s squad in the near future.