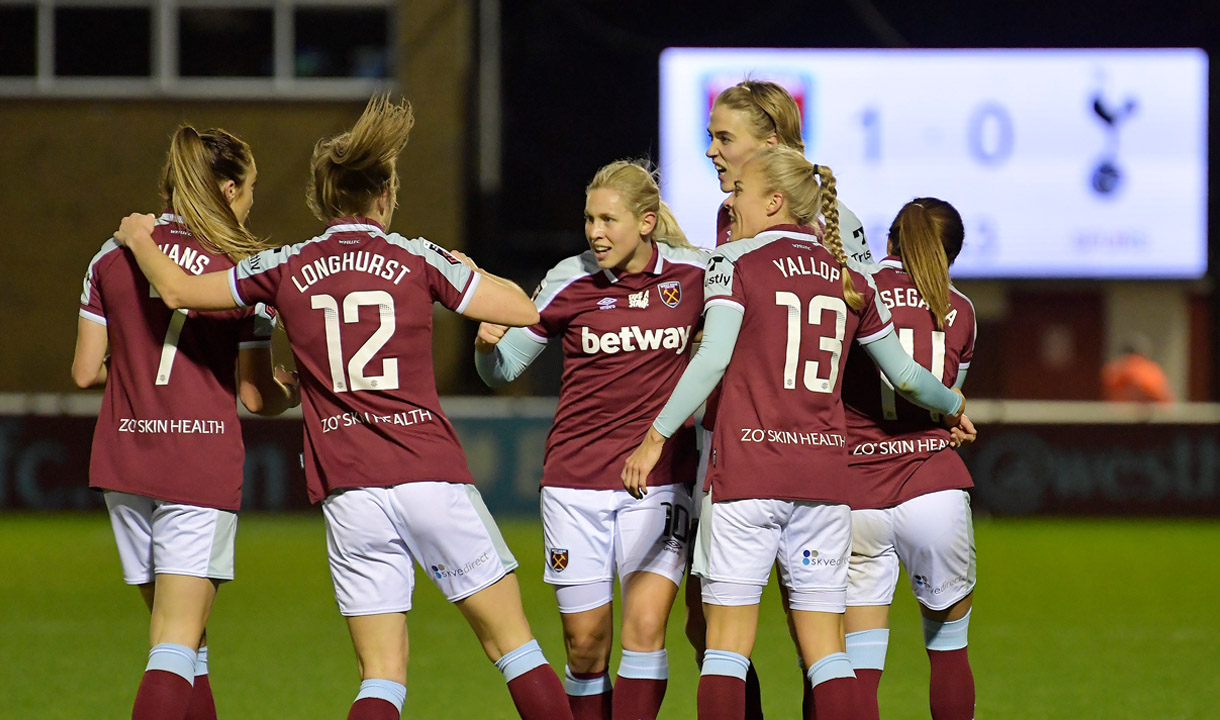 It was almost poetic that West Ham United supporter, Dagný Brynjarsdóttir would be the one to make the difference on a bitterly cold afternoon in East London.

The life-long Hammers fan showed composure and quality with her finish - after Claudia Walker had flicked the ball behind for the Icelandic international to sweep home with her left foot.

It’s Brynjarsdottir’s second goal for the club since joining in January – having scored in another crucial win away at Manchester City in early October.

You can watch the midfielder’s post-match interview over on West Ham TV by clicking here.

2. A first ever WSL win over Spurs Women!

On their fifth attempt, West Ham United Women secured victory over Tottenham Hotspur for the first time. In the previous four games against their London rivals, they’d drawn one and lost three.

That derby day winning feeling had been one that the Hammers faithful have had to wait a long time to experience, and they certainly made some noise when Brynjarsdóttir's strike hit the net.

It also meant that the bragging rights stay in East London for the first time - at least until the two sides meet again in January!

You can watch highlights from the win by clicking here!

3. Another clean sheet for Mackenzie Arnold!

Mackenzie Arnold was once again at her very best on Sunday afternoon, as she made a string of good saves towards the end of the match to keep Spurs at bay.

The 27-year-old goalkeeper has been in good form this season for the Hammers, making an average of four saves a game so far this term.

The Australian international will now head away with team-mate, Tameka Yallop for the Matildas’ two friendly matches against the United States.

4. An unbeaten week and up to fifth!

Olli Harder’s aim ahead of the contest with Spurs was to make sure that his side finished the week unbeaten, which they have done. The Irons have picked up wins over Spurs and in the Continental League Cup against Birmingham City, as well as a draw against Reading in the WSL.

If the Hammers had hung on in that match against the Royals, then they could have been occupying 4th – but the boss was still delighted at the full-time whistle with the fantastic result.

You can watch Harder’s full post-match interview by clicking here.

It’s worth remembering that Harder’s first match as West Ham United boss was against Tottenham Hotspur - a 0-1 defeat at the Chigwell Construction Stadium back in January. Since then, the New Zealander has kept the team in the division after picking up a solid run of results at the back end of the 2020/21 campaign.

After a summer of change, Harder has got West Ham United moving in the right direction, added exciting players like Yui Hasegawa, Tameka Yallop, Lisa Evans and Claudia Walker, as well as giving young players like Mel Filis and Lucy Parker opportunities in the first team.

It’s the best start that the team have had since they turned professional ahead of the 2018/19 season – and the early signs look promising for a positive campaign this time around!