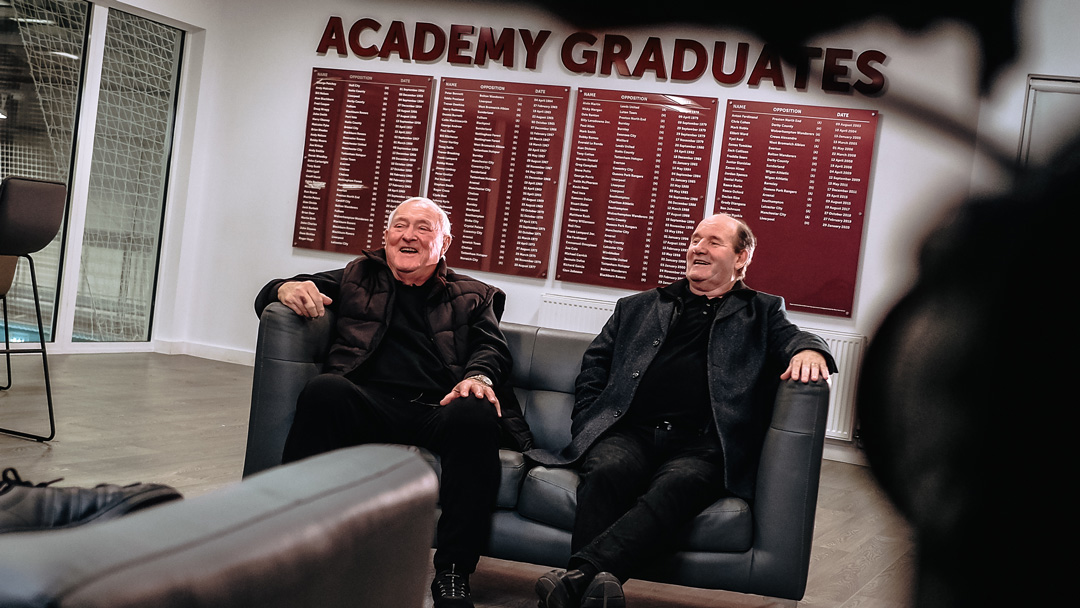 Scouting and recruiting young footballers is far from an exact science, but Jimmy Tindall and Jimmy Hampson are as close as it gets to professors in the subject.

Between them, the ‘Two Jimmys’ have well over 50 years of experience and knowledge of the topic of watching schoolboy football and spotting those with the potential to go to the very top of the game.

Hampson played for Senrab before starting his own scouting career at Wimbledon and Charlton Athletic, where he began working with Tindall and recruited, among others, a young Lee Bowyer.

The pair were then approached by Tindall’s boyhood friend Harry Redknapp, who was then West Ham manager, to work for their local club.

Together, the Two Jimmys became West Ham’s youth development officers, scouring London, Essex and beyond for the Academy of Football, with Hampson concentrating on Under-14s and Tindall on players aged 14 and older and reporting back to Academy Director Tony Carr.

At West Ham, the pair became arguably the best in their role anywhere in the country, recruiting as players such Joe Cole, Michael Carrick and later Mark Noble ahead of some of the biggest clubs in the country.

“You’ve got to do it properly to make it successful,” said Tindall. “When I started the Senrab club many years ago in 1961 I just wanted it to be the best, so I went everywhere to get players and that’s what we did, and I wanted to do the same when I came to West Ham as there’s no point trying to be second best.

“It was a team game, with the experience we had with Tony Carr and Paul Heffer and the people we had, us…

“We work well together and always have done,” Hampson explained. “We were of the same mind when looking at players. We knew how to talk to them and talk to their parents and persuade them to come to West Ham for a first look and, once they’d had a first look, we didn’t really lose any.

With the guidance of the Two Jimmys and the leadership of Carr, West Ham’s Academy thrived, with the youth team reaching the FA Youth Cup final in 1996, before winning a Youth Cup and Premier Academy U19 League double in 1999, with Cole and Carrick starring.

The same year, the dynamic duo recruited another schoolboy who would go on to great things – an eleven-year-old Mark Noble.

“We’d had a tip to watch a boy called Greg Barwick who was playing over at Loxford Park, Ilford. I went over there and they were playing a team called Lake View. There was this little blond kid who was everywhere, always on the ball, passing it and everything and I just came back and said ‘The boy Barwick did well, but the boy on the other side will be in the first team at 18 if we can get him.

“He was at Arsenal at the time. Jim and I drove up to Newcastle to watch him play for Newham District and spent three days up there and we persuaded him to come and look at West Ham.

“He was an Under-11 and I thought he could play in our Under-15s, not physically, but his brain was as good as any of the Under-15s we’d got.”

The ‘little blond kid’ was, of course, Noble, and Arsenal were not about to let him go easily. A scout called Tindall and said the promising schoolboy would be signing for the Gunners that same week.

“I phoned up Jimmy and said we had to go over his house, and I carried signing-on forms in my cab,” explained Tindall, who was a part-time scout and part-time taxi driver at the time. “So, we went over there and came out of the house at half-past-two in the morning!

“We signed him there and then. It cost us two tickets for every home game for Mark’s Dad, but the rest is history.”

“I was playing football with his sister in the hallway!” Hampson smiled. “I was from Canning Town and they were from Canning Town so we knew the same people. They were just a nice family. To sit down with them was so natural.

“But if that scout from Arsenal hadn’t rung up bragging, then we’d have lost him.”

The young Noble’s appetite for the game made the Two Jimmys convinced he would make it.

“Mark and his friend Nicky Axford used to come to Chadwell Heath every Saturday morning on the bus from Beckton, get a ball out and knock it around and practice their skills while watching a South East Counties (reserve-team) game,” Hampson remembered. “You knew the dedication on him. He was a lovely kid from a great family and we never had a problem with him. They’re great ingredients to put in the pot and he’s been a great servant to this Club.”

“He also loved this Club,” Tindall nodded. “Let’s get it right, he’s had a fantastic career, an unbelievable career.”