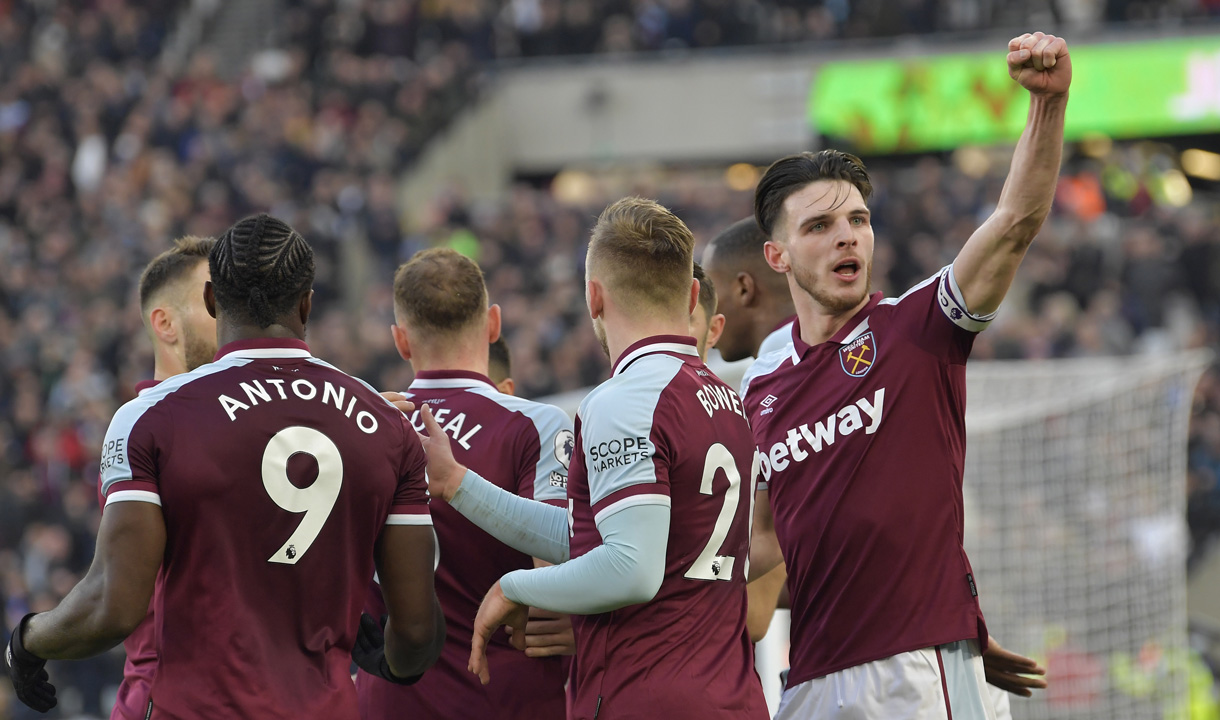 Declan Rice: We're buzzing for the remainder of the season!

Declan Rice says West Ham United is 'buzzing' ahead of a hugely exciting period of the 2021/22 season.

The Hammers face seven games in the space of 22 days in three different competitions that could largely shape the remainder of what has so far been a memorable campaign.

In between, Rice and company will travel to Southampton in the Emirates FA Cup fifth round and tackle six-times winners Sevilla in the UEFA Europa League round of 16.

The England international is excited, as he told rapper and West Ham fan Guvna B during an Instagram Live chat following the UEFA Europa League draw on Friday...

We’ve drawn Sevilla in the UEFA Europa League round of 16, then?

“I’m excited, I’ve seen the draw and I’m looking forward to it! We were outside training as we start at eleven, so we didn’t see the draw, but Stuart Pearce came running out shouting at the top of his voice that it was Sevilla.

“Obviously you’re still focusing on training but when you come in you take in the draw and see what it’s like and obviously a massive club and a massive team and it’s going to be a tough tie, but if we want to compete with the best and test ourselves against the best, we’re going to have to beat the best if we want to win the competition.

“So, we’re excited and all the lads and the manager and of course the fans are looking forward to it.”

Sevilla might have a strong squad with talented players, but we do too, so there is no reason why we can’t get the better of them, is there?

“I think we’re always confident and as lads we never go into a game thinking we’re going to come out with a bad result. We honestly think we can beat anyone on our day.

“They’ve added some good players, players we’ve played against in the past [in Erik Lamela and Anthony Martial] and obviously they’ve had that experience of going far in the competition and winning it, but we’ve settled really well into life in Europe and to top our group was a massive confidence booster.

“Now, obviously, it’s the knockout stages and we’ll take it a game at a time and, of course, we want to come out on top, so we need to stay focused and we know we’ve got a big challenge ahead.”

We’ll take a couple of thousand fans to Spain to cheer us on, too…

“Everyone knows what I’m like with the fans. I think they’re incredible the way they sing the players’ names and travel home and away and, of course, what a tie for them!

“They’ve been waiting a lifetime to see West Ham play away in Europe at a big club and they’re finally getting the chance to do it, so I know they’re going to come out there in their thousands and every pub will probably be taken over by West Ham fans and they’ll probably take some pie and mash over there to show the Sevillans what it’s like!

“They’re buzzing for it and, of course, it’s always good to see our away fans travel and our support is so good.”

Then we’ll bring them back to London Stadium under the lights on 17 March, and that will be special, won’t it?

“One thing about that stadium is that it needs those big nights. It’s a lovely stadium and when you’re playing there and the place erupts, the atmosphere is incredible and there’s no better place to play football.

“Of course, if we can get a good result in the away leg, going into the home leg the place is going to be up and running, so we’re looking forward to it and it’s always a boost having the second leg at home.”

Before we finish, we’ve got Wolves on Sunday in the Premier League, so how are the preparations going?

“Really well. Obviously recently we’ve not had the results that we’ve wanted but we’ve only lost two in ten [in all competitions] so we’re still in strong form, but we’re not winning as many games as we’d like to.

“We know Wolves are a good side, they’re really strong and well-organised, but we’ve beaten them before and we’ve got the quality, it’s just about doing it on the day.

“We’re confident, we’ve worked really hard in training to prepare for that, so we want to get back on track.

“Especially going into the big Europa League games, we want to pick up our form again and keep it going, so we’re buzzing for Wolves and for the remainder of the season.”