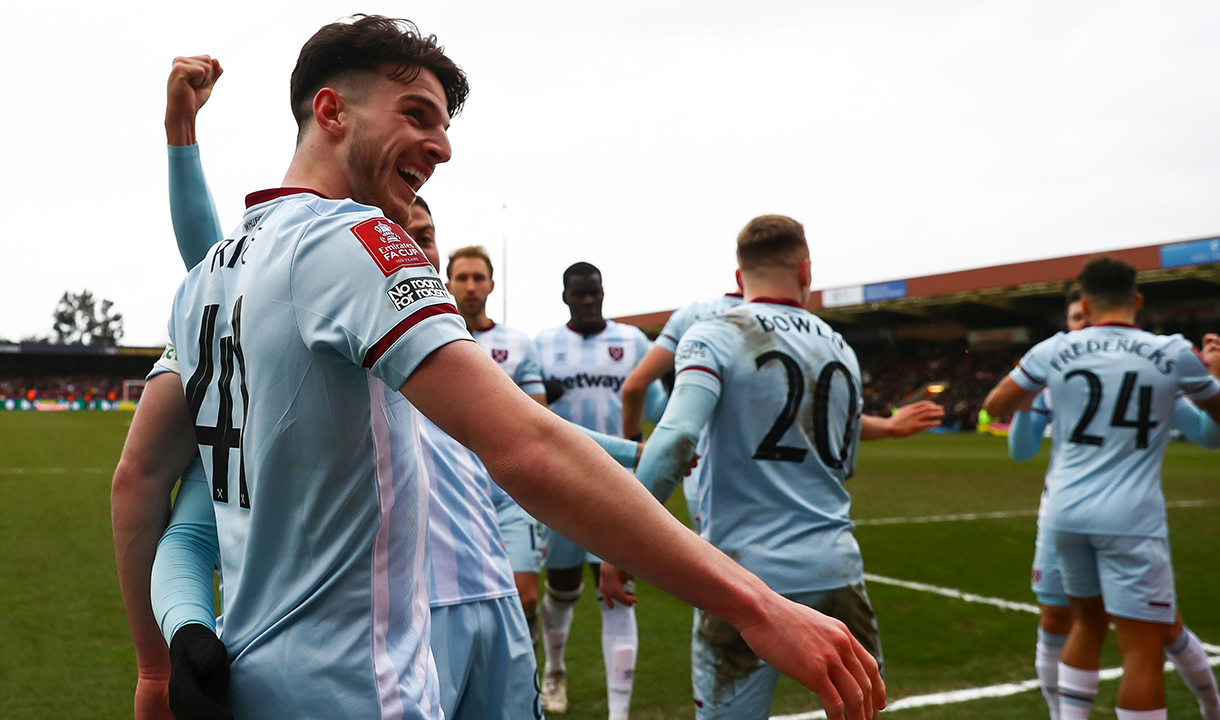 Declan Rice directed the plaudits towards Kidderminster Harriers after West Ham United were taken all the way to the end of extra-time by their National League North hosts.

With 114 places separating the two teams in the league ladder, an Emirates FA Cup fourth-round shock appeared to be on the cards as the Harriers led an off-kilter Hammers team all the way into second-half stoppage time.

But as he has done so many times this season, Rice stepped up and stamped his authority on the game, collecting Pablo Fornals’ pass in the first minute of injury time and slamming a finish into the roof of the net to take the game into 30 minutes’ extra time.

The two teams appeared set to be destined for a penalty shoot-out, only for West Ham to score in the closing seconds once more, Jarrod Bowen tapping in from Aaron Cresswell’s low pull-back.

With it taking time for West Ham to show their quality and eventually secure victory, Rice opted to praise their opponents after the game.

"Massive, massive respect to Kidderminster,” Rice told BBC Sport. “We watched a few videos of them this week, we’ve seen their results and they've been flying.

“Speaking to a couple of their players afterwards you can see they’re top guys, and you could see it on the bench with their manager. We weren't at our best today and scraped it with two late goals.

“Kidderminster fought for every ball. We weren’t at the races in the first half. Luckily enough, we got one back late in the second and then we nicked at the end.

“We really need to improve if we want to push on, but massive congratulations to them as well because they were excellent.”

A buoyant atmosphere at Aggborough Stadium greeted both sets of players, with the Hammers and the Harriers meeting for just the second time in both clubs’ history.

The occasion yielded an FA Cup fourth-round epic with Rice admitting that, whilst his side played beneath their usual level, securing passage to the FA Cup fifth round was the main goal.

"When you play in games like this, you always know what it’s going to be like,” he continued.

“The fans are on top of you and they’re going to be really up for it. They will fight for every ball and give a hundred per cent. It can be a shock to the system.

“We don’t come to places like this very often. We knew what to expect, but it's really hard to get to grips with the game at the start. I think any player would tell you that.

“As the game started to settle, we started to move the ball around a little bit more, but they were in a great shape, pressed hard and made some great substitutions.

“We're through to the next round so that's the most important thing."