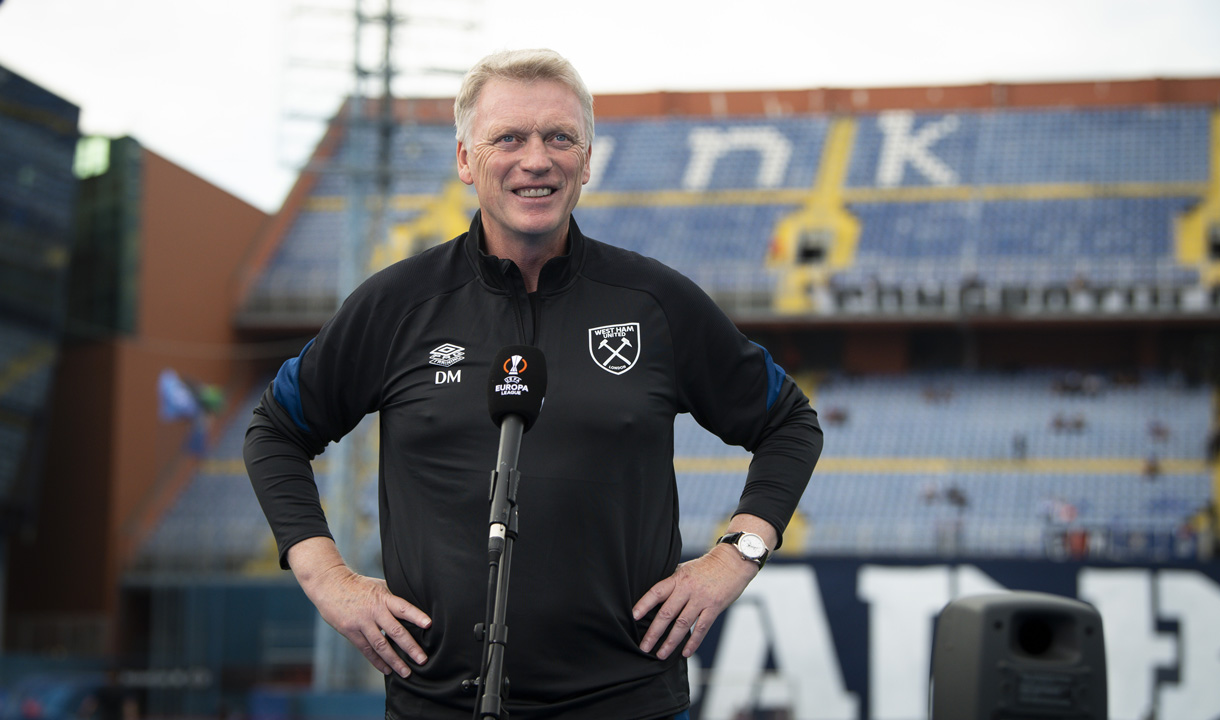 David Moyes: We want to get through our UEFA Europa League group unbeaten

The Irons kicked-off their campaign with a 2-0 win in Zagreb in mid-September, producing an assured performance to defeat the Croatian double winners and set the foundation for a superb group stage that has featured four victories, four clean sheets, eleven goals scored and direct progress to the round of 16 with a game to spare.

With his team already assured top spot in UEFA Europa League Group H, Moyes has revealed he will blood a number of Academy of Football prospects in the return fixture with Dinamo, but he is also determined to secure another victory over respected opponents who have played nearly 350 matches in European competition.

Thursday’s opponents may be enduring a relatively difficult season, having replaced their head coach last week after being eliminated from the Croatian Cup, but the West Ham manager pointed to their run to last season’s Europa League quarter-finals as proof of their quality.

I see it as being a big game, a big opponent, big history and we need a big performance to get another result

“I believe that Dinamo are a huge European club with a great history and you only have to see the results against Tottenham last season [when they came from 2-0 down to win 3-2 on aggregate in the round of 16] for how good a team they are.

“They’ve made a few changes, but when you say ‘Dinamo Zagreb’ everybody knows exactly what you’re talking about. I’ve got great respect for them because they qualify for European competition most seasons and have great experience. For us to go and win in Zagreb was such a start for us in the group and it was a huge part of our development because of the experience they have.

“I see it as being a big game, a big opponent, big history and we need a big performance to get another result.”

West Ham’s cause will be helped by the presence of one Croatia international – Nikola Vlašić – in our own starting XI, and the absence of another – Bruno Petković – from Dinamo Zagreb’s.

“I think it’s helpful that he’s not here because he’s a really good player and we were careful of him for the first game,” said Moyes of Petković, the 6’4 centre-forward who misses Thursday’s game through illness.

“The way he links the play up for Dinamo is really important and I think he’s one of their better players and one of the Croatian internationals. So, for us, him missing I hope helps, but we we’re well aware there will be opportunities for other players who have made a name already to show what they can do.”

Another player who will want to show what he can do is Vlašić, who has started all four of West Ham’s Europa League victories and grabbed his first assist for the Club in the 2-0 win in Rapid Vienna a fortnight ago.

“We like Niki a lot,” Moyes confirmed. “It’s taken a little bit of time for him to settle, but he will get plenty of game time in the future because of the busy schedule we’ll have through the winter. He’ll play on Thursday night – he played in the first game and played well for us and we’ll give him the opportunity to show that again.

“We understand what it means to the group and we want to get through unbeaten, we want to try to get three points and keep the momentum going.”