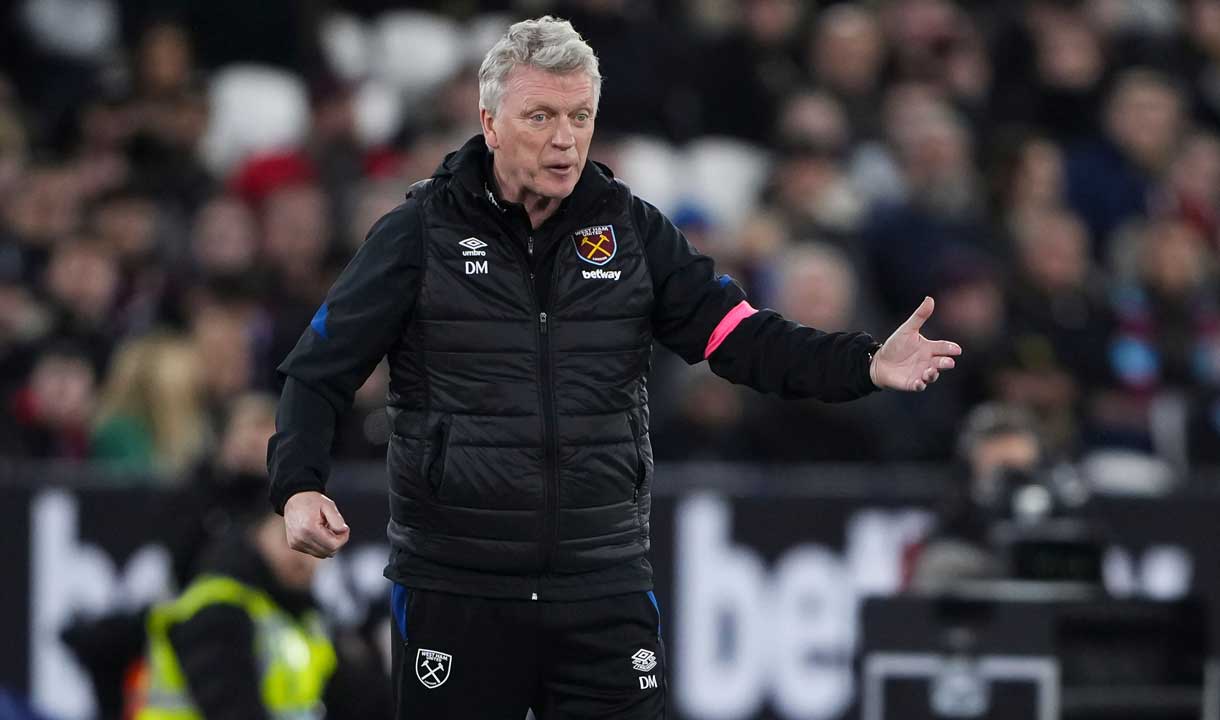 David Moyes addressed the media on Friday afternoon as he looked ahead to Sunday’s Premier League trip to Leicester City.

The boss was asked about the Foxes’ form, Brendan Rodgers’ impact as their boss, Declan Rice and Kurt Zouma.

Here’s what the manager had to say…

Leicester might not be in the best moment but they have a really good side.

They’ve done unbelievably well over the years. They’re FA Cup winners and not too long ago they were League winners. They are the sort of club you look at because of the way they’ve built it.

You look at the facilities, the way they went about their recruitment, so I have to say that over the years they have been a very good model for teams trying to improve such as West Ham, which we’re trying to do.

They’re maybe not in the best moment right now, but I still think they are a very strong team. They have an excellent manager and it will be a tough game for us.

Brendan Rodgers is one of the best coaches around.

I think what it does do is that it shows in football you can have good times or bad times and in the bad times we have to try and find your way through and get your way through it. I’ve got to say I hope we keep his bad run of form going at the moment. I hope we can try and add to it, but I think Leicester are a really good team, they’ve got some top players and we’re very aware of the difficulty the game poses.

I feel as though we have a real opportunity this season.

We have an opportunity like other teams – you look at Tottenham, you look at Arsenal, you look at Manchester United – but I think in times going back, you’d say West Ham would not be competing against those teams, but now we are and now we’re getting talked about challenging.

Declan Rice is ambitious and we share his ambition as a Club.

We’ve got close with being in European football. We’re now getting ourselves in the position where we’re giving the top teams a game. What we’re trying to do is continue building on it. Declan’s a big part of it. He’s a really important player to us and we want to try and fulfil those ambitions, the same as Declan.

I don’t think a Club could have taken more action any quicker than what they’ve done at the moment. West Ham have done a really good job, we’ve fined him maximum wages. I’m not condoning his actions, they were terrible and we’ve all accepted they are diabolical. But we’ve chosen to play him and I stand by that

The situation with it is terrible. The incident in the video is terrible, we all totally agree with that. There is nobody in the football club who doesn’t agree with that. Sponsorship, if that’s being taken away, that’s something the Club will deal with, not me. We’re going to get him some help, he is getting help, so we’re trying to do as much as we can as a Club and as a team to help him.

He’s really disappointed and is incredibly remorseful. Like everybody else, in life sometimes you ned a bit of forgiveness and he’s hoping he’s forgiven for a bad action. We mustn’t forget that many of us through our lives will make mistakes and you hope there are people out there who will give you a bit of forgiveness.

We’ve dealt with Kurt exactly as we would for any other player in the squad.

He’s treated in exactly the same way as any other player. I’ve never, in my whole career, over 1,000 games, treated any player any differently. When it it’s regarding disciplinary reasons or anything else, everybody is treated the exact same.

We can’t forget all the good things we’ve done over the past couple of years.

We’ve got ourselves in a really good position with the way the Club’s working and the way the team’s playing, so we don’t want anything to distract from that. We’re really sorry we’ve upset West Ham supporters, but it was an incident we hope will be forgiven and we’ll forget in time and move on, and we need their support. They’re really important to us. For the West Ham supporters who are disappointed by it, I’ve got to tell you, we all are at the Club as well.