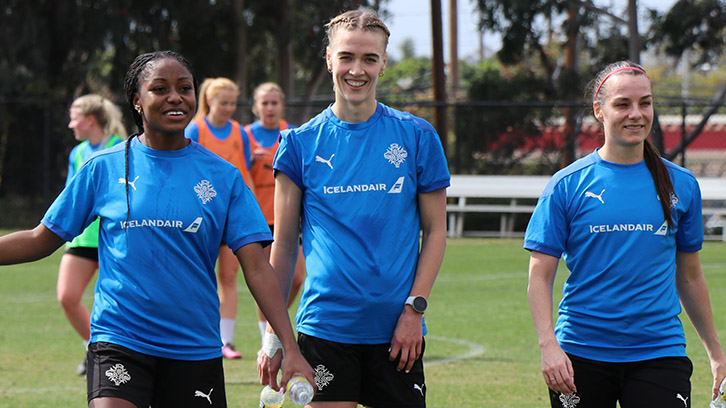 West Ham United’s Dagný Brynjarsdóttir helped Iceland to make a winning start in their to the SheBelieves Cup.

The 30-year-old midfielder was making her 98th cap at Dignity Health Sports Park in Carson, California on Friday – and made an instant impact.

With the game just 43 seconds old, a corner was only partially cleared by New Zealand goalkeeper, Erin Nayler – and the Hammers midfielder was able to scramble the ball home from close range.

The early setback forced the Football Ferns to bring the game to Iceland, but they struggled to create any meaningful goal-scoring opportunities with Cecilía Rán Rúnarsdóttir largely untested in the Iceland goal.

And Stelpurnar okkar managed to see out the match with very little issue, placing themselves at the top of the group after the opening round of matches.

In the other match in the SheBelieves Cup, Kateřina Svitková played the full match as the Czech Republic secured a 0-0 draw against a young USA side.

​​​​With recognisable stars like Alex Morgan, Megan Rapinoe, Christen Press and Tobin Heath all left out of the squad, coach Vlatko Andonovski named a side with an average age of the 25.5, the youngest since April 2018. Five starters had fewer than 15 appearances with the team.

Svitková and her side were largely second best, but battled well to keep the USA from taking the lead, goalkeeper Barbora Votikova stopped a shot from Rodman, who was ruled offside, in the 68th minute. The Czech goalkeeper finished the match with eight saves.

Svitková and Brynjarsdóttir will face off against one-another in the next match, which will be played on Sunday 20 February.

Meanwhile, a late French penalty meant that England U23 made a losing start in the first match of their double header this week.

Both Grace Fisk and Mel Filis started in the 3-2 defeat in Lisieux in France at the Stade Pole de Normandie on Thursday afternoon.

France took an early lead this afternoon through Naomie Feller but the Young Lionesses equalised midway through the half when Charlton Athletic’s Katie Robinson crossed from the left-hand side and Racing Louisville striker Ebony Salmon scored with a low strike.

The home side regained their lead minutes later though, as Ella Pallis ensured the French went into the break with a narrow advantage.

Three minutes after half-time, England equalised once more when Salmon turned provider inside the penalty box to assist Liverpool’s Missy Bo Kearns.
But seven minutes before the end, France secured what would prove to be the decider from the penalty spot.

England goalkeeper Sandy MacIver was able to get a hand to substitute Manon Revelli’s spot-kick but the ball rebounded off the inside of the post to make it 3-2.

Finally, Halle Houssein was an unused substitute as England U19 kicked off their Marbella International Tournament campaign with a 4-0 win over Finland.

Goals from Grace Clinton, Elysia Boddy and a brace from Freya Gregory secured the win for the young Lionesses, who will now face Denmark in their final match of the tournament.

Houssein is one of seven Hammers away on international duty this fortnight.