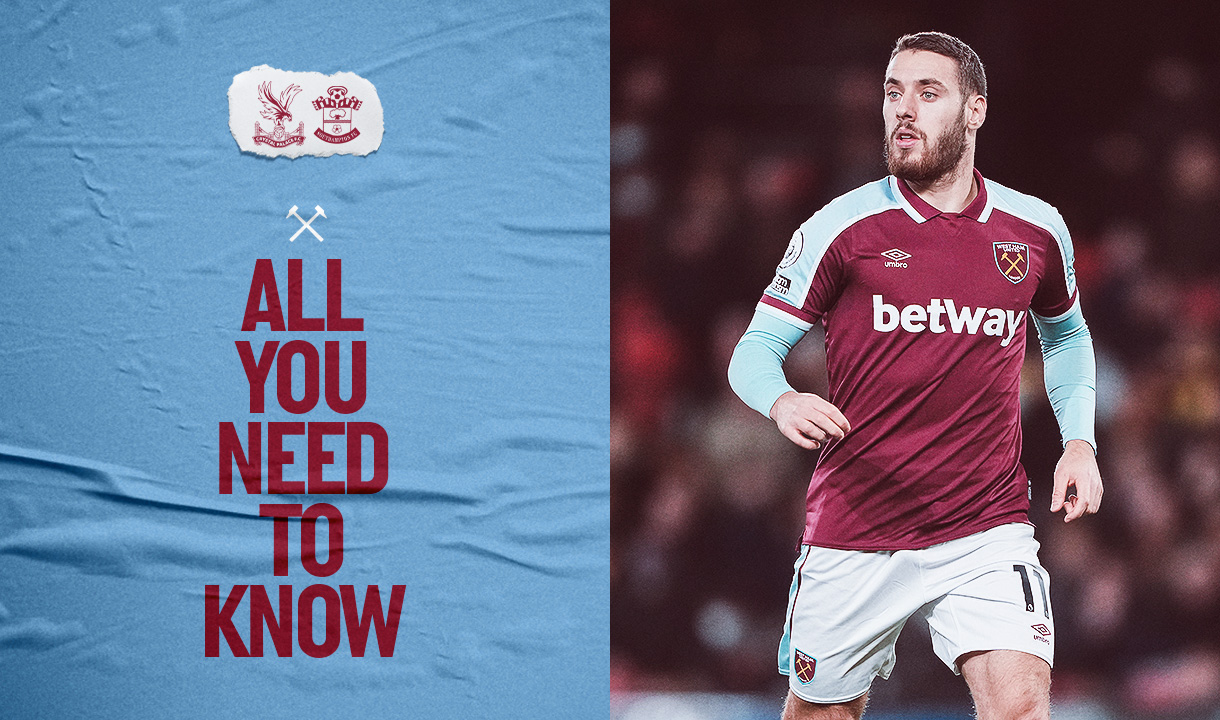 The Hammers complete their hat-trick of festive fixtures inside the M25, having lost 3-2 at home to Southampton on Boxing Day before bouncing back with a 4-1 win at Watford on 28 December.

Our New Year's Day fixture marks the start of the second half of the Premier League season.

The Hammers ended their opening 19 fixtures with 31 points and went into 2022 fifth in the table, albeit the teams directly below David Moyes' side - Manchester United and Tottenham Hotspur - both have games in hand.

Crystal Palace have had a decent opening half of 2021/22 themselves under manager Patrick Vieira, who was appointed in July, scoring 23 points from their opening 19 matches to go into the New Year in eleventh place.

The two teams played out a 2-2 draw in the reverse fixture in east London on 28 August, and a similarly competitive fixture is in prospect at Selhurst Park on Saturday evening.

There will be no official coach travel to Selhurst Park.

Tickets are on General Sale for our home Emirates FA Cup third round and Premier League fixtures with Leeds United on Sundays 9 and 16 January respectively now. Click here to be there in-person for the visit of Marcelo Bielsa's Peacocks to London Stadium.

Kick-off on New Year's Day is at 5.30pm with the game being broadcast live on television in the UK by Sky Sports Main Event, Sky Sports Premier League and Sky Sports Ultra HD. If you are based overseas, you might be able to watch the game in your territory. Click here for overseas broadcast listings.

West Ham United manager David Moyes will definitely be without Kurt Zouma (hamstring tendon) and Angelo Ogbonna (knee), while Aaron Cresswell has also been sidelined in recent weeks with the back injury he suffered colliding with the goal post at Manchester City on 28 November.

Declan Rice returns from a one-match suspension for receiving five bookings and will make his 150th Premier League appearance for the Club, becoming the youngest player ever to reach that landmark for the Hammers.

Pablo Fornals missed the victory at Watford after returning a positive COVID test - the first match he has missed in all competitions this season.

Saïd Benrahma features for the final time before linking up with the Algeria squad for the 2022 CAF Africa Cup of Nations tournament in Cameroon.

Former Arsenal and France midfielder and ex-New York City FC and OGC manager Nice Patrick Vieira was the man selected to replace Hodgson, and the 45-year-old has already made a big impact at Selhurst Park.

Vieira's Eagles are a more potent attacking force, with the likes of Wilfried Zaha and Christian Benteke flourishing alongside summer signings Odsonne Édouard and Conor Gallagher - the latter of whom is on loan from Chelsea and scored both goals as Palace secured a 2-2 draw at London Stadium in August.

Palace have been particularly good on home turf, roared on by their vociferous supporters in south London.

Four of the Eagles' five Premier League wins have been secured at Selhurst, over Tottenham Hotspur, Wolverhampton Wanderers, Everton and, last time out, Norwich City.

Palace have also won away at Manchester City and drawn with Arsenal and Leicester City, suggesting they can be a match for anybody in the Premier League.

West Ham United have enjoyed our trips to Selhurst Park in recent seasons.

In fact, we have tasted defeat at Crystal Palace just once in our last seven visits, winning four and drawing two.

Last season, Tomáš Souček scored twice and Craig Dawson netted a towering header as the Irons scored a 3-2 victory that was more comfortable than the final scoreline suggests.

We also scored Premier League wins at Selhurst Park in October 2016, when Manuel Lanzini netted the only goal, October 2015, when Dimitri Payet was at his brilliant best in a 3-1 victory, and August 2014, when Carlton Cole was among the scorers in a 3-1 success.

Our biggest-ever League win at Selhurst Park was the 3-0 victory we achieved in October 1971, when debutant Ade Coker was on the scoresheet alongside Clyde Best and Billy Bonds.

He has refereed West Ham United on 32 occasions, including the penultimate game at the Boleyn Ground against Swansea City in May 2016, and the 4-1 Premier League victory over Leicester City at London Stadium in August.