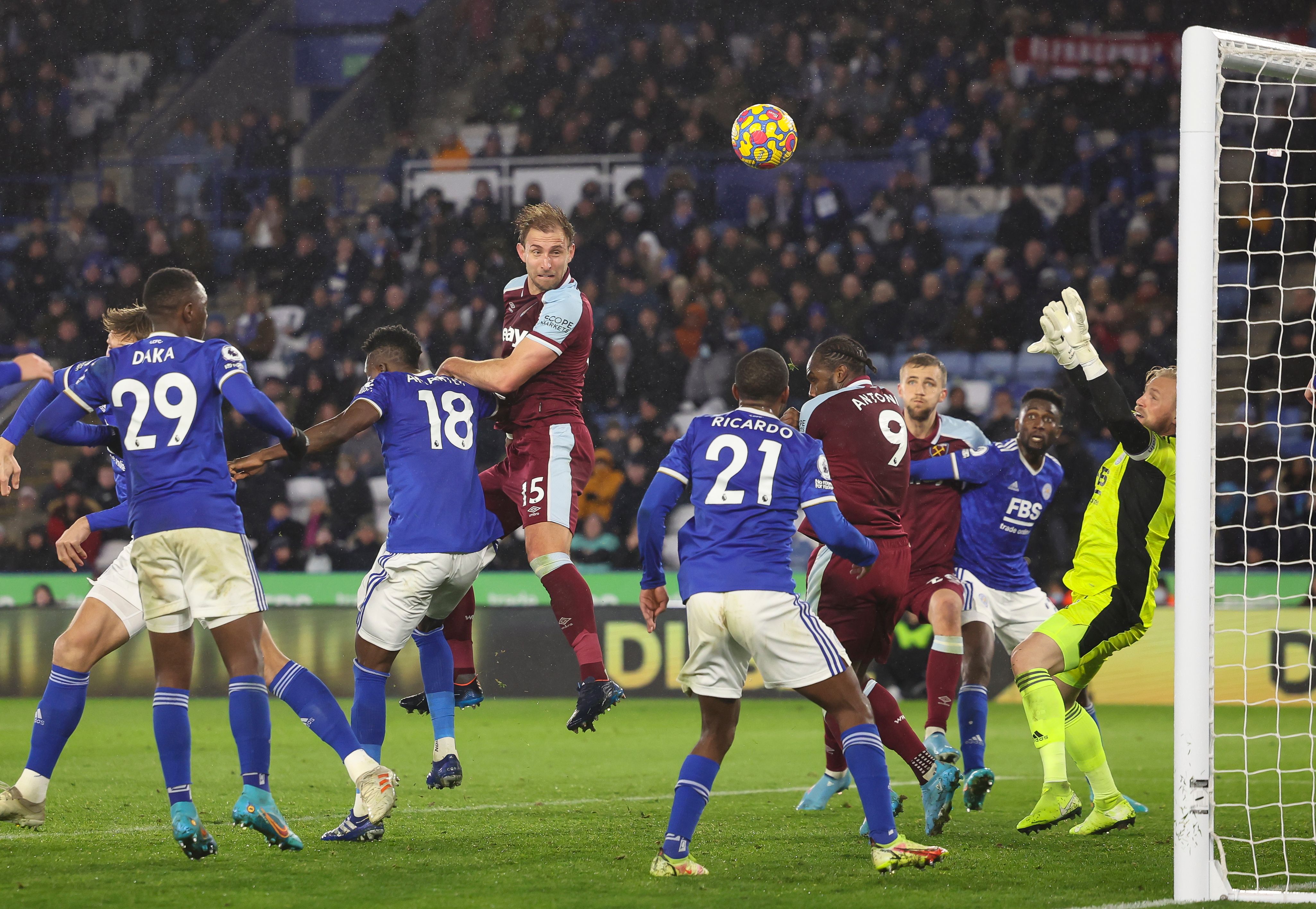 The Hammers had led for much of a bitty first half at a wet and windy King Power Stadium on Sunday, Jarrod Bowen racing through after ten minutes to fire in his seventh goal in his last seven games with a clinical finish.

Yet a penalty conceded on the stroke of half-time appeared to have given the Foxes the momentum they needed to take all three points when Youri Tielemans dispatched it clinically and played a part in Ricardo Pereira stooping to head home early in the second half.

But West Ham's resolve remained strong, and despite struggling to find their usual rhythm, their sheer spirit and determination paid dividends when Dawson flung himself towards Bowen's corner in the first minute of injury time, thumping home to clinch a point in Leicestershire.

In search of a third win in the space of nine days, manager David Moyes made one change to his starting XI, recalling Manuel Lanzini, with Issa Diop subsequently brought into the side following a withdrawal during the warm-up.

Battling torrential rain and biting winds at King Power Stadium, the Claret and Blue Army were in fine voice throughout, giving their all to help their players do the same on the pitch.

A stop-start opening saw players from both sides require treatment as the ball spent little time actually in-play – a theme which pervaded throughout the half.

Yet with the very first opportunity for either side, ten minutes into the match, West Ham took the lead.

Jarrod Bowen’s fifth goal in his last five Premier League games – and seventh in seven in all competitions – was a pristine finish.

The No20 took a touch to control a long ball forwards before arrowing a low rocket across Kasper Schmeichel and into the bottom corner.

And the Frenchman impressed in his next meaningful engagement ten minutes later as Leicester attempted the same tactic, only for Diop to use all his pace and strength to match Patson Daka stride for stride and allow Łukasz Fabiański to gather.

With West Ham controlling the midfield, it was an approach Leicester doubled down on in the first half, with Aaron Cresswell and Vladimír Coufal – returning to the site of his West Ham debut last year – remaining alert to cut out several diagonal passes.

Fabiański did well to punch one particularly threatening James Maddison corner clear under pressure, before Manuel Lanzini and Bowen both had low crosses cleared in front of the Leicester goalmouth as the game swung from end to end without any real chances of note.

As several more players went down needing treatment tending to, a stop-start half yielded little in terms of shots on goal, Youri Tielemans’ and Harvey Barnes’ shots from the corners of the box – both sailing high and wide – two of just five in total for either side in the opening 40 minutes.

Leicester did, however, turn up the pressure as the half-time whistle approached, notching a momentum-shifting equaliser three minutes before half-time.

As Cresswell motioned to head away Maddison’s in-swinging corner, the ball instead struck the No3’s arm, and a penalty was duly awarded by referee Michael Oliver.

Tielemans stepped up to take it, burying a sweetly-struck finish into Fabiański’s bottom-right corner, despite the ‘keeper guessing and diving the right way.

The Hammers immediately went up the other end and might have retaken the lead in first-time injury time, but Michail Antonio’s clipped cross was not attacked with sufficient conviction by the supporting Fornals.

And the chances continued to flow before the half-time whistle as Fornals’ pull-back was struck goalwards by Cresswell on the edge of the box. The No3 sadly scuffed his effort and a deflection off Lanzini took it further away from Schmeichel’s goal.

The game had only just been ignited as the half-time whistle sounded, but the second half picked up where the first left off, a reinvigorated Leicester immediately on the attack as West Ham struggled to keep hold of the ball.

Luke Thomas’ cross was only half-cleared by Dawson and bobbled invitingly for Maddison to half-volley from just inside the box, but the England international smashed his effort well over the bar.

A miscommunication moments later between Schmeichel and Amartey almost allowed Bowen to creep, but the defender did manage to smuggle the ball away.

And the Hammers’ pressure continued when Fornals exchanged passes with Cresswell on the left and slid a square ball across the face of goal. The cross somehow evaded several of the Foxes’ defenders to arrive at the feet of Bowen, whose first-time finish on the penalty spot was blocked by Amartey in front of goal.

The game had, at long last, opened up, and ten minutes into the second half, Daka came within inches of giving Leicester the lead, sliding in but narrowly missing Barnes’ strike across the face of goal.

Sadly, the Irons’ respite was temporary.

A cross-field pass from Tielemans once again gifted Barnes the chance to cross and this time, his hanging ball was attacked with fervour by right-back Ricardo Pereira, whose stooping header found Fabiański’s top corner.

And the Belgian was proving irrepressible at times, who were thankful his next fierce shot – again following a cross-field pass from 25 yards whistled clean over Fabiański’s bar.

West Ham attempted to respond but struggled to pick out a final pass on a wet and windy evening in Leicestershire.

Tielemans came close to getting onto the end of Barnes’ scooped pass into the box as the game approached its final ten minutes, with Moyes introducing the likes of Ryan Fredericks, Nikola Vlašić and Saïd Benrahma off the bench in an effort to reinvigorate his team.

Both Fredericks and Benrahma won late corner kicks for their side, statistically Leicester’s weakness in the Premier League this season, and while the former’s came to nothing, the latter’s was only half-cleared to the Algerian himself on the edge of the box, who looped a dipping volley narrowly wide of Schmeichel’s top corner.

Vlašić also showed plenty of wiling in chasing down a Cresswell through-ball and squaring for Benrahma, who danced past two defenders but saw a left-footed effort comfortably saved by Schmeichel.

In a rare Leicester attack in the closing stages, second-half substitute Ademola Lookman dragged wide when well-placed inside the box, but the attacking momentum was by and large with the Hammers.

Benrahma continued to look lively with a deflected effort from distance which yielded a corner kick in the opening seconds of injury time.

And it was a set-piece which earned West Ham a hard-fought point as Bowen whipped the ball in, Leicester - not for the first time this season - failed to deal with the delivery, and Dawson rose highest to nod the ball into the roof of the net and spark wild celebrations in the away end.