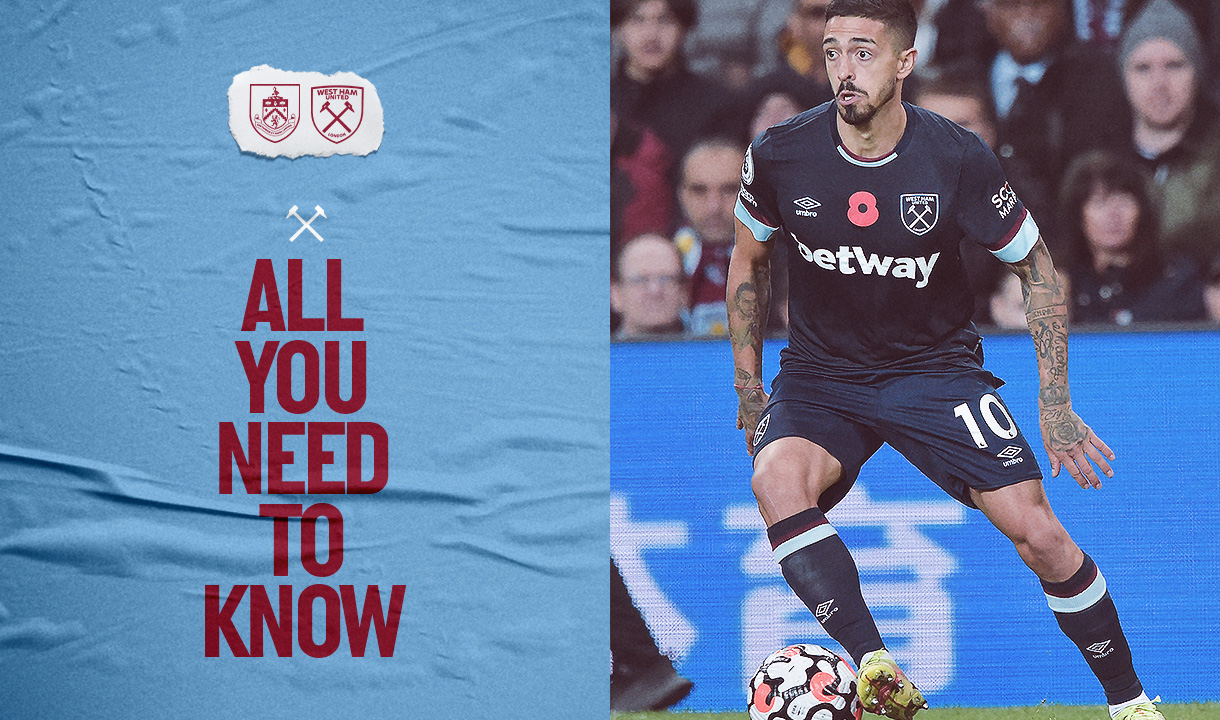 West Ham United return to Premier League action by making their second-longest journey of the 2021/22 season - the 250-mile trip to Turf Moor to face Burnley.

The Hammers kick-off matchweek 16 fourth in the table with 27 points from 15 games, and head to Lancashire having beaten then-leaders Chelsea 3-2 at London Stadium in their previous top-flight fixture.

That victory ended a run of three Premier League games without a win and manager David Moyes will hope his team can reproduce the same level of performance they did in beating the Blues last Saturday afternoon.

Opponents Burnley have won just one of 14 Premier League games this season - their recent home match with Tottenham Hotspur was postponed due to heavy snow - and begin the weekend 18th in the table with ten points. The Clarets lost 1-0 at fellow strugglers Newcastle United last weekend.

Tickets are available for our upcoming home Premier League matches with Norwich City - via the Ticket Exchange - Southampton and Leeds United - both on General Sale - at our online Ticket Office here.

Sunday's 2pm kick-off will NOT be broadcast live on television in the UK. We are playing on a Sunday due to our Thursday night UEFA Europa League commitments, rather than because the game was selected for live TV coverage.

David Moyes is hopeful Aaron Cresswell will recover from the injury he suffered when colliding with the goal post at Manchester City last Sunday, which caused him to miss the Premier League fixtures with Brighton & Hove Albion and Chelsea. The No3 is back in training and the manager said he is 'touch and go' for Sunday's game.

The manager will definitely be without Angelo Ogbonna, who is continuing his rehabilitation after undergoing surgery on a cruciate knee ligament injury, as well as Kurt Zouma and Ben Johnson, who both suffered hamstring injuries in the win over Chelsea.

Burnley manager Sean Dyche will make late calls on Ivorian attacking midfielder Maxwel Cornet and centre-back Ben Mee, who have been recovering from thigh and shoulder injuries respectively. Wales right-back Connor Roberts has been ill this week and is unlikely to feature.

Burnley and their manager Sean Dyche have become synonymous with the Premier League in recent seasons, but the Clarets’ slow start to the current campaign have seemingly put their six-year top-flight stay in jeopardy.

Dyche’s side have won just one of their opening 14 Premier League matches and go into Sunday’s game in the bottom three, but they have overcome indifferent early-season form before and their experienced manager and squad will be hopeful, if not confident, they can do so again in 2021/22.

Burnley’s only victory so far came on 30 October, when newly-promoted Brentford were beaten 3-1 at Turf Moor.

It has not been all doom and gloom, though, as the Clarets have also held Leicester City, Chelsea and Wolverhampton Wanderers to draws away from their historic home stadium.

The hosts' hopes will rest heavily on New Zealand international centre-forward Chris Wood, who has a fine record against West Ham United. The 30-year-old has scored seven goals in eight Premier League matches against the Irons, more than he has versus any other side and netted in all four of his appearances against the Hammers at Turf Moor in the competition.

West Ham United and Burnley meet in the Premier League for the 15th time on Sunday.

The Hammers have won eight of the previous 14 fixtures between the two clubs, with the Clarets winning five and just one draw.

West Ham have scored 21 goals to Burnley's 20, but the Lancashire side has kept four clean sheets to West Ham's three. The Irons have not kept a clean sheet in any of their seven previous Premier League visits to Turf Moor.

Sean Dyche’s men did the Premier League double over West Ham in 2019/20, winning 3-0 at Turf Moor in November 2019 and 1-0 at London Stadium in July, but the Hammers got their own back by completing their own double last season, winning 1-0 in east London in January before securing a 2-1 success at Turf Moor in May.

West Ham’s biggest Premier League win over Burnley came back on 28 November 2009, when Gianfranco Zola’s side secured a 5-3 win at the Boleyn Ground, while the Hammers also won 3-1 at Turf Moor in October 2014 and 4-2 at London Stadium in November 2018.

Affiliated to the Oxfordshire FA, Graham Scott began refereeing at the age of 28 in 1997, having previously played as a goalkeeper for Abingdon Town at youth level.

Scott worked his way up through local leagues before being appointed to the National List of referees in 2008, aged 39.
Now 52, Scott refereed his first Premier League fixture in November 2014 when he took charge of Burnley’s 1-1 draw with Aston Villa – a game in which Joe Cole scored Villa’s goal.

Scott’s rise continued as he was appointed to the Select Group of Premier League referees in 2015.

Scott has yet to officiate a West Ham United fixture this season, but he has taken charge of 12 Hammers' games previously, with the most-recent being our 2-1 home Premier League win over West Bromwich Albion in January 2021.

None of the 12 previous West Ham matches Scott has officiated has ended in a draw, with eight wins and four defeats.