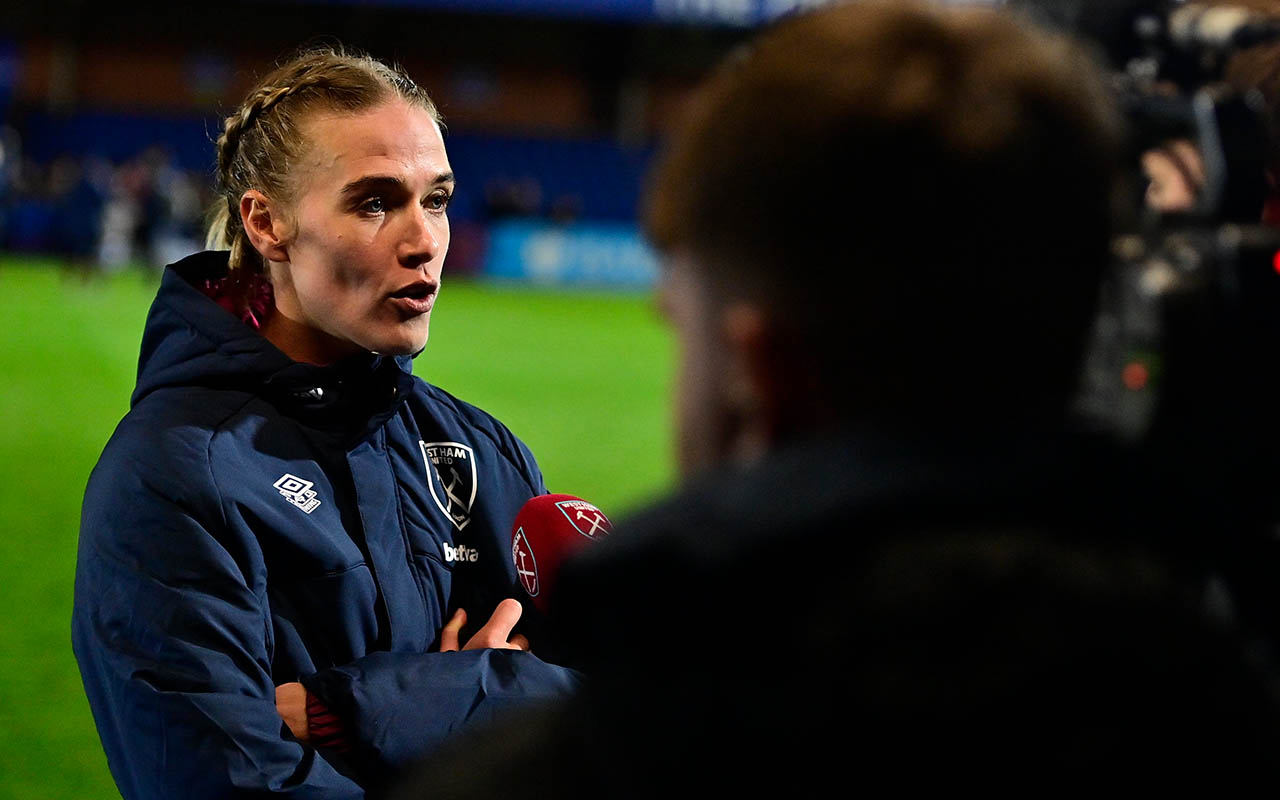 Dagný Brynjarsdóttir got West Ham United Women off to the best possible start on Wednesday evening when she headed in the opening goal against Chelsea.

The skipper found the net with a pinpoint effort from an impressive corner kick delivery from Kirsty Smith with only three minutes on the clock at Kingsmeadow.

But, unfortunately, Paul Konchesky’s side were unable to hold on to the lead, as Fran Kirby scored just before half-time – with that equaliser swiftly followed by goals from Sam Kerr and Millie Bright in the second half.

It was not to be for the east Londoners, despite Mackenzie Arnold's penalty save from Lauren James, but the midfielder praised the efforts of her team at the full-time whistle.

“I think we gave Chelsea a good game tonight,” the Iceland midfielder told whufc.com. “The aim was always to come here and try and walk away with three points, and I’m disappointed that we weren’t able to do that and also that we conceded three scrappy goals that we could have done better with.

“But I have to give credit to Chelsea. They are a great team and if you don’t defend well or defend set pieces as we should then they’re going to get opportunities to score.”

The Irons were under pressure for the majority of the match from a potent Chelsea attack that included the likes of Kerr, Kirby, Erin Cuthbert and ex-Hammer Kateřina Svitková.

For the majority of the first half, they were unable to break through a stubborn West Ham defence, with the players putting their bodies on the line on several occasions during the game.

And Brynjarsdóttir was pleased to see the work that the team put in defensively against the Blues.

“Overall, we were really good defensively, all the way from Viviane [Asseyi] up front and right the way down to Macca (Mackenzie Arnold) in goal. We were able to create some chaos on the field and make them work for their chances.

“Their goals were pretty scrappy, and I think with a bit of luck, the ball would have fallen to us and we would have been able to clear them, but it doesn’t always work that way.

“There’s lots of positives to take out of the game. It’s our third game of the new season and I think we’re getting better with every game that we play.

“We need to go away now, fix a couple of little things ready to go again on Sunday, this time in the cup.”

Seventeen-year-old midfielder Keira Flannery came off the bench in the closing stages of the game to make her West Ham United debut.

Like Brynjarsdóttir, the former Arsenal midfielder is a West Ham supporter and her skipper was pleased to see the teenager get her chance on Wednesday.

“It’s awesome to see Keira make her debut, she’s a good young player and will hopefully be the future of West Ham. We have some really good young players that are in and around the first-team picture at the moment.

“It’s a big thing to make your debut at 17 against Chelsea, I thought she did well when she came on and I’m really happy for her,” she concluded.

The Hammers will look to return to winning ways when they travel to London City Lionesses for their FA Continental Women's League Cup Group C opener at Dartford FC's Princes Park on Sunday. Kick-off is at 2pm.