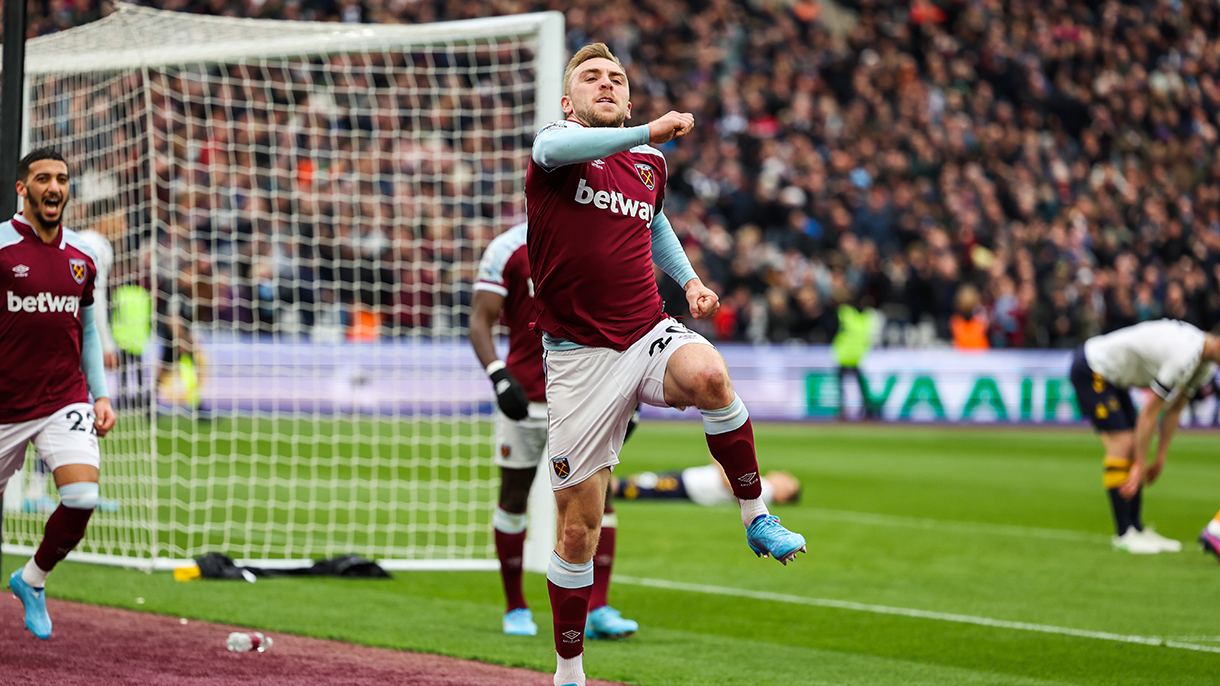 Bowen: That’s what you want when you’ve been out!

Some things in football are just meant to be – like Jarrod Bowen scoring the winner on his return to action for West Ham United!

The Irons’ No20 had been absent from his side’s last four games in all competitions following a heel injury sustained in the defeat to Liverpool at Anfield on Saturday 6 March.

Yet having resumed training during the international break, the fleet-footed forward returned to manager David Moyes’ team perhaps earlier than many would have anticipated, lining up to face Everton at London Stadium.

And after Aaron Cresswell’s sumptuous free-kick midway through the first half had been cancelled out by Mason Holgate’s deflected effort for the Toffees, the stage was set for Bowen’s brilliance to shine once more.

Keeping stride with Michail Antonio as the Hammers’ No9 raced in on goal and had a low shot kicked out by Jordan Pickford, Bowen was duly on hand to slide the ball into the unguarded net, celebrating exuberantly.

Everton captain Michael Keane was later dismissed for a second bookable offence as the Hammers held out for an important 2-1 win.

Sealing that victory, Bowen revelled in coming back with a bang, having now been directly involved in 17 Premier League goals this season (nine goals, eight assists), the joint-most of any English player (alongside Harry Kane), and behind only Mo Salah (30) and Son Heung-min (18).

That’s what you want when you’ve been out!

It’s been four weeks, so it’s been annoying, obviously, with the timing, but injuries happen on your journey.

To come back into the starting XI and get the goal and the three points, I don’t think you can ask for much more.

My lungs are probably actually the worst for wear, but the actual injury is okay and I think out there I tried to be as sharp as I could.

Obviously, I’m not going to be where I was before I got injured, but it’s about building that up game-by-game and just getting confident each game. I’m just happy to score and get the win.

Aaron Cresswell’s goal was one in 50!

We’ve been telling him to do that all the time, but even the second one [later in the second half] was close! Credit to him.

Down the years he’s scored so many good free-kicks like that and to get one today, I think it meant a lot for him.

I think we knew that they would come out chasing the game [in the second half] and it was just about dealing with it.

They got the goal, which was a kick in the teeth, but the mentality of this group is that when we go back to being all-square, it’s about the reaction. We showed a reaction.

Mick did unbelievably for the goal, thankfully I saw it fall out and I thought: ‘Please don’t miss this – just score this!’ I was buzzing when it just came to me from there.

We want to go as far into the competitions as we can, and keep winning.

There are seven games left in the Premier League and we’ve got Europe left to concentrate on as well, so a great thing is winning games of football and we want to do that each game.

We get confidence from each game we’re in. We’ve won today and we’ll take that into Thursday night [the UEFA Europa League quarter-final first leg against Olympique Lyonnais] and again following on.

The atmosphere at London Stadium is brilliant.

Going back to the Sevilla game, I wasn’t playing, and as a player you want to be playing in those games, but when I was here watching it, you just get lost in it because the atmosphere was electric.

Even today, I’ve said from the start of the season we’ll need the fans right to the end of the season when there’s highs and lows in football, and today they were brilliant again.