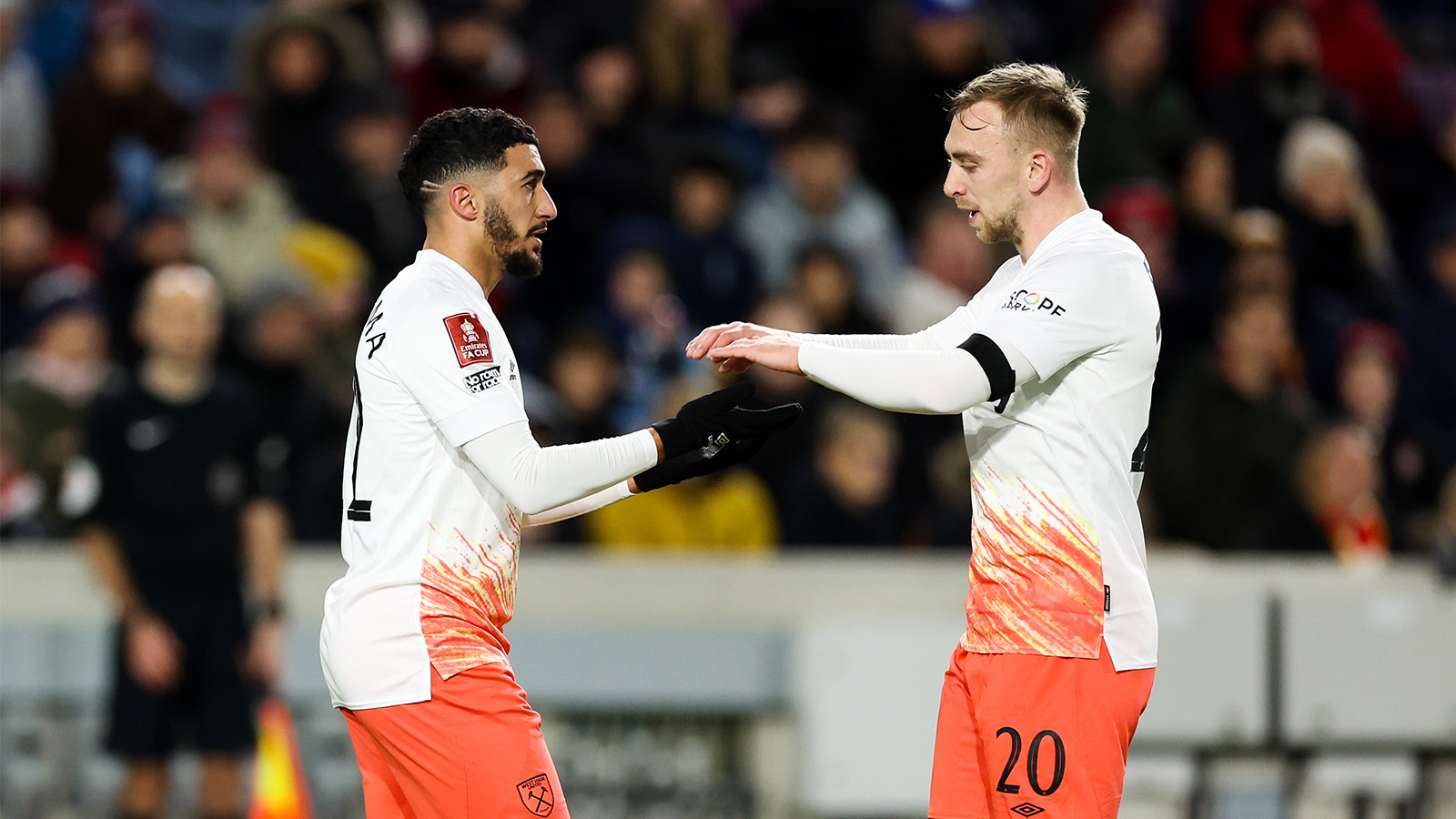 Benrahma returns to sting the Bees

The Algeria forward came off the bench and provided the decisive moment of quality at the Gtech Community Stadium eleven minutes from time.

After a superb Declan Rice tackle broke the play to Benrahma’s feet, the No22 let fly and saw the ball arrow past a helpless Thomas Strakosha.

That strike would ultimately decide the tie and book West Ham's place in the FA Cup fourth round draw, which will take place on Sunday 8 January at 4pm GMT.

In truth, Benrahma provided a much-needed spark after chances were few and far between before his introduction with 20 minutes to play.

In the first half, neither side was able to take control of a fixture that became dominated by the west London rain. And as the weather toiled in Brentford, little of the action warmed either sets of supporters, the best chances perhaps falling the way of the hosts. Inside 15 minutes, Keane Lewis-Potter had time to cross to Yoanne Wissa but Łukasz Fabiański was composed, sticking out a strong foot to deter the Brentford No11 and send the ball wide.

While Lucas Paquetá sent a rushed volley high into the west London sky and Jarrod Bowen later dragged an effort past the post, the Hammers struggled to create chances of real note. Instead, they sat deep and frustrated Brentford, who were later inches away from the opener after West Ham struggled to deal with a free-kick from wide left. A penalty-area scramble ensued as the Bees swarmed the West Ham box. The ball broke to Ben Mee who hit the post, before an off-side flag allowed West Ham to clear their lines.

As the Irons pushed forward in first-half stoppage-time, a corner saw a chance to test Thomas Strakosha in the Brentford net. Instead, the delivery from wide left failed to beat the first man, and did little but epitomise the lack of quality, and chances for either side.

After the break, both outfits attacked with more purpose. And the Hammers should have been ahead too. A neat move down the left found Emerson, whose cross fell at the feet of Tomáš Souček. The No28 was unable to poke home from eight-yards out though.

But the opportunities continued to fall to those in Claret and Blue. Dawson later stretched but could not get on the end of a delicious free-kick to the back post, while Emerson saw his shot blocked, and Antonio headed an Aguerd cross over the bar.

With neither side settling for a replay, Brentford responded with efforts of their own. Lewis-Potter flicked the ball narrowly wide of the West Ham goal, before David Moyes introduced Saïd Benrahma in an attempt to find a decisive winner in the final 20 minutes.

And he did just that. A superb challenge from the skipper Rice broke up a Brentford attack and saw the ball break to Benrahma. The Algerian forward let fly from distance, the ball swivelling up and down before settling in the Brentford net. An exquisite effort to put the Irons ahead. One more than worthy of settling a FA Cup tie.

Brentford pushed for an equaliser, but the Irons stood tall. Aguerd, on his first FA Cup appearance, crucially blocking a strike from Schade to take the Hammers into the fourth round, and secure a first victory over Brentford since a 4-1 win in April 1993.