Benrahma on Mother's Day: She gave me everything

On Sunday 27 March 2022, many households across the country will celebrate Mothering Sunday or Mother’s Day, showing their appreciation to the mother figures they cherish.

That very same appreciation has often been on display from West Ham United forward Saïd Benrahma, who has regularly been seen celebrating successes in Claret & Blue with his family.

For whereas most players are accompanied by their agents when they go to sign for a new Club, Benrahma arrived at Rush Green Training Ground a year-and-a-half ago alongside his mother and siblings.

The 26-year-old’s mother was also captured on social media celebrating with West Ham fans – and, at full-time, the Algerian forward himself – on several occasions, including wins over Liverpool at London Stadium and Watford at Vicarage Road.

Living with his mother ever since he was 12-years-old and moved from Algeria to France, for Benrahma, she truly is a figure to celebrate…

Saïd, you have such a close relationship with your mother. What kind of a role has she played in your life and in your career?

We have such a good relationship and there is a feeling between us that I don’t think I have even with my friends. If I’m here, if I’m playing in the Premier League, then it is mostly thanks to her.

We are a big family. I’m the youngest – I have six sisters and an older brother. We have such a special relationship – we’re a very tight-knit family.

Mum is the boss. Now, she’s our mother and our father. She does everything. She gives us advice and she’s the one who makes all the decisions.

She really is the boss at home. We get on so well in our family, and we always support each other to reach our dreams.

It’s a long journey to becoming a Premier League footballer – what did your parents have to do to help you achieve that?

Ever since I was a kid, they gave me a lot of freedom and they knew I liked football.

When I lived in Algeria with my father, all he cared about was that I enjoyed myself, regardless of whether I was good or not. When I arrived in France, my mother had the same approach.

First and foremost, they transmitted this freedom to me, which was to enjoy what I was doing. What I’ve achieved is thanks to them. Ever since I got to France my Mum took care of everything. She gives me strength, but also motivation and help.

Ever since we came to France, and ever since I became a professional, I’ve always lived with my Mum. When I signed for Nice, she came with me.

She has this knack of finding the right words to get the best out of me. She always knows when I need space, and that’s the real strength of our relationship so that I can then give my best.

She always helps me, in a lot of different things. Sometimes we don’t agree but I always end up doing what she said. She’s always right.

How proud do you think she is of you today?

I hope and I think she is very proud of me. The reason I play football is for my Dad, my Mum, my siblings and my family.

I also try and give them happiness, because they were by my side when times were tough. My parents supported me, especially my Mum, and they helped me and believed in me always.

She always knew I was going to make it, even when I had doubts. She was always there, because that’s who my Mum is.

It was the fruits of all our hard work. It was natural for me. It wasn’t a case of thinking whether or not I wanted her there – she just had to be there.

It was natural for her to be there because like I said, I just want to make her proud, and if she is happy then I am happy. I do this for her and the family.

Those are moments that just came very naturally to me – it’s not like I’m doing it on purpose for the cameras! I just have this special bond with my mother and everything I do with her is natural.

When I see her, I must give her a hug. Even when I’m at home, I’ll see her and give her a hug. She’s everything to me and she’s the most important person there is for me personally.

Even when I was at Brentford or Nice or even Ajaccio, if I scored a goal, then I’d go see her. That’s me. My Mum is my pride and I want to do everything for her and make her happy.

The West Ham fans gave your mother a great reception as well!

It’s great to see! It’s a sign of respect and I was very happy. The fans show their respect for my Mum and it’s a very pleasing thing to see as a player.

Saïd Benrahma's mum watched his performance from the away end today ❤️

He headed straight over to her at full-time... 🥰 pic.twitter.com/weKygjyAE3

What does your mother think about West Ham as a Club?

She loves it here. She’s very happy – she enjoys it, otherwise she wouldn’t come to every home game. She’s become a die-hard fan!

She likes it here and she’s happy. She’s very pleased to see how things are going. I can see that when she comes to the Stadium. You can tell that she really likes coming to watch us play – especially when we win!

She’s obviously watching a lot of our matches at the moment – apart from yourself, naturally, does she have any favourite players?

She really likes Manuel Lanzini and Declan Rice, because she likes players who have good technique. Also, Michail Antonio, because she reckons he’s strong.

She likes everyone really, she’s a real fan. Generally, she takes an interest in everyone.

You’ve been in London for almost four years now – do you feel like a Londoner?

Yes. I’m starting to get used to it now, even though it was a little tough at the start, but now I feel like I am at home.

I feel good. It’s a great city, even my Mum really likes it. I feel like she’s happy. She’ll go out shopping on her own and she doesn’t speak a word of English, but she loves it.

She loves the London way of life. I thought she wouldn’t like it, but it turns out that she knows the city a lot better than I do!

What message would you send to your mother this Mother’s Day?

I just want you to be happy and proud. That’s the most important thing for me. The rest will come in time. I’m sending you a big kiss. I love you! 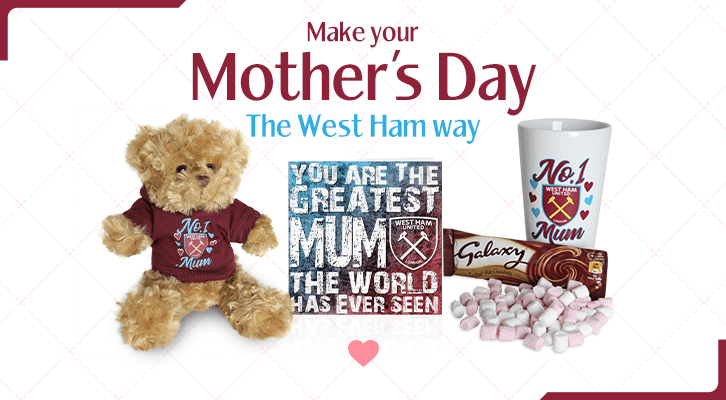